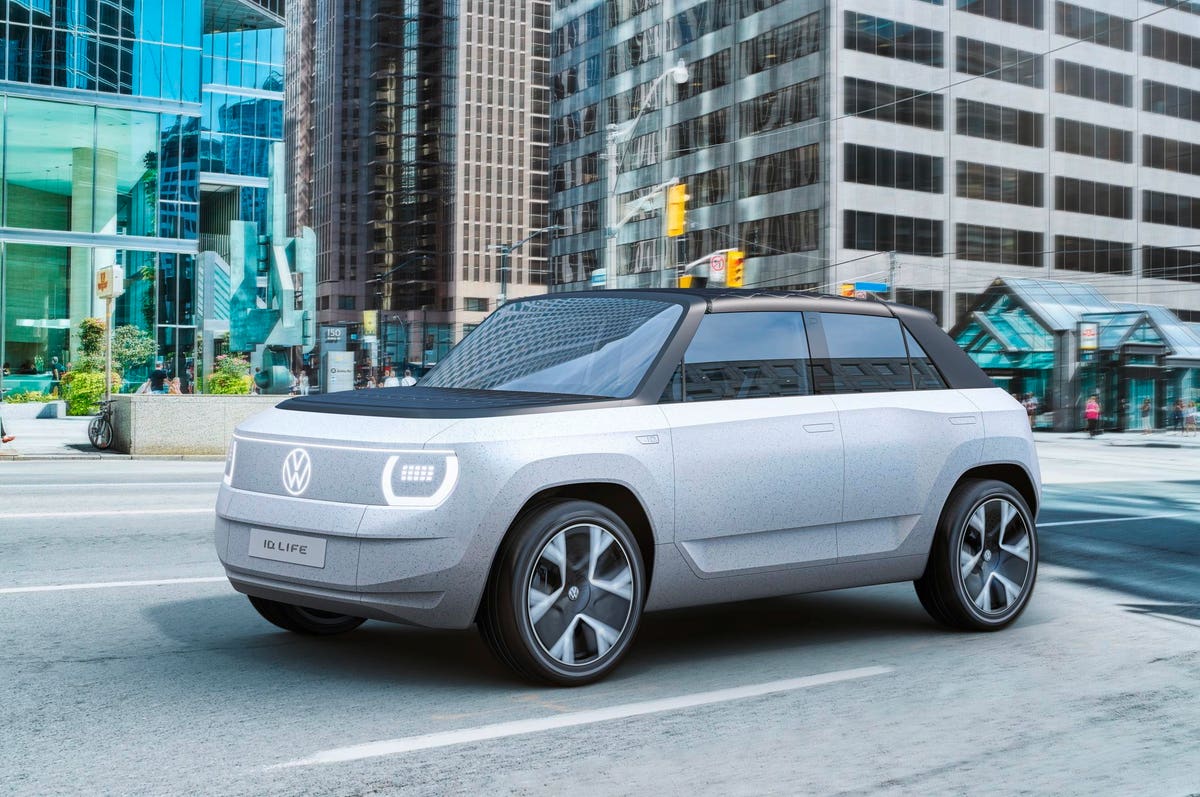 Europe’s automakers are relentlessly producing the wrong kind of electric car, but Volkswagen showed it might move in the right direction by showing its mass-market aimed ID.Life concept at the IAA Mobility 2021 show in Munich.

The industry is trying to emulate the all-round abilities of internal combustion engine (ICE) cars and SUVs, but this isn’t possible if European Union carbon dioxide (CO2) regulations are to be met. The more the industry tries to make electric cars achieve ICE-type high-speed cruising levels and long-range, the more electric CO2 advantages are diluted with ever bigger batteries and the polluting palaver notched up along the way.

The curse of chip supply restraints echoed around the show. There was much talk of autonomous transportation, robotaxis and of course electrification.

If the electric revolution is to be achieved, the industry must accept the fact that things have changed. Regular electric cars won’t be able to perform all the roles ICE ones can, but they can provide a huge amount of utility for shopping, commuting, school runs, and city, urban and rural travel. Up to maybe 90% of real-world requirements? You can forget long-range high-speed cruising with current battery technology, but if car makers design a seriously affordable little car that can do all this – say under €10,000 ($12,000) – the buyers will come running, governments will be able to put away their subsidy cheque books, taxpayers can breathe a sigh of relief, and the electric car revolution will be up and running.

The trouble is, the little ID.Life will cost an estimated €25,000 ($29,600 after tax) when it appears for sale in 2025, and that’s about twice as much as an entry level car should cost. VW, which has said EU regulations to curb carbon dioxide (CO2) by 2030 will make it impossible to sell profitably its current cheapest models like the Up and Polo, but perhaps by then battery costs will have been seriously shaved.

Barclays Equity Research said VW was focusing on the “wider mobility space” with the ID.Life concept, which it thought would sell from around €20,000.

“(The ID.Life) focusses on sustainability with recycled and natural materials being used for key components. According to VW it brings electric mobility to the masses with the low price point and mainly focusses on urban mobility,” Barclays said in a report.

The price sounds a bit steep for the masses though.

And VW warned that any near-term acceleration in the introduction of electric vehicles might be in danger of stalling because of battery “constraints”, presumably including battery supply, and the actual ability to produce required performance.

This follows a warning from Professor Ferdinand Dudenhoeffer, director of the Center for Automotive Research (CAR) in Duisberg, Germany.

“After the chip crisis, from 2024, an increasing global battery cell bottleneck must be expected,” Dudenhoeffer said.

News from Toyota in Tokyo, one of many global manufacturers that didn’t attend the IAA (for Internationale Automobil-Ausstellung) Mobility show, that it planned to fully enter the all-electric car race with a spending plan of $13.5 billion by 2030 to develop batteries and factories to build them and 15 battery electric vehicles by 2025, must have shaken up the participants. These were mainly German, with a few outsiders like Renault and its value subsidiary Dacia.

Toyota has sounded reticent about joining the race to go all-electric, preferring to concentrate for the time being on hybrid cars and SUVs, and a notable investment in hydrogen fuel cells. The next big advancement in battery technology will be solid-state and Toyota has been quietly investing in this. Solid-state batteries are expected take battery power to a new level because they will likely be much more energy dense, allow faster charging, cost 50% less and not be prone to occasionally bursting into flames. Big car makers outside Japan must be having nightmares that Toyota might well suddenly announce a big technology breakthrough that will leave their lithium-ion technology stranded.

Meanwhile attendees at the show revealed a succession of either bloated, high-priced electric cars, or variations on the current theme of what effectively are required – town cars – but which cost about twice as much as their utility would suggest.

Mercedes announced 3 possible all-electric models, the EQE sedan, the EQG version of the G-Wagon, and EQS Maybach, with the former likely to come to market in 2022, priced from around €70,000 after tax in Germany ($83,000). Barclays Equity Research described the Mercedes electric line-up as one of the strongest of the German premium manufacturers.

The EQE will compete with the Audi A6 e-tron and boasts a range of 660 kilometres (410 miles) and over-the-air (OTA) computer system updates like Tesla
.

Like VW, BMW showed a concept car using materials which have been recycled, although BMW I Vision Circular won’t appear before 2040. BMW outlined a range of targets concerned with cutting CO2 emissions, with 4 concept vehicles including a bicycle and the recycled car.

VW’s Audi showed what it called a private jet for the road (not suggesting a candidate for the mass market) the Grandsphere, which also looked forward to fully autonomous driving.

Robotaxis were in the headlines too. Intel Corp’s
Mobileye subsidiary and German car rental firm Sixt SE will start a driverless ride-hailing “robotaxi” service test in Munich next year and hope to expand the service across Germany and eventually Europe. Before the show Argo AI, the autonomous driving startup backed by Volkswagen and Ford, said it is planning to test electric VW ID.BUZZ robotaxis at a track in Munich with the ambition to start a service within 4 years. Alphabet’s Waymo and GM-backed Cruise are also cranking up self-driving taxi ventures in the U.S. Hyundai showed its robotaxi based on the Ioniq 5 electric vehicle and expected to begin transporting passengers next year. Hyundai’s robotaxi has been developed with Motional, a joint venture with APTV.

Outside of the German’s mainly concept-based presentations, none of the brands relating to the PSA/FCA merger now known as Stellantis, and Nissan attended. There was some show-room ready action. Renault unveiled its electric Megane and its down-market subsidiary Dacia introduced the Jogger, a 5-to-7 seater MPV.

IAA Mobility 2021 takes over the time slot in the calendar from the biennial and now deceased Frankfurt car show. The show closes Sept 12.