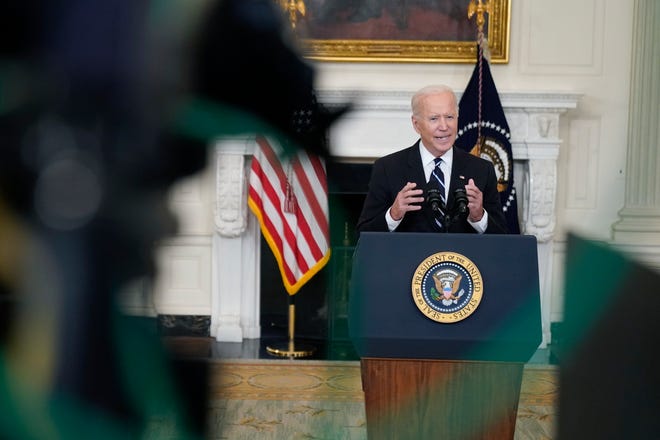 History and the law are on President Joe Biden’s side when it comes to coronavirus vaccine mandates, a medical historian and legal experts told the Free Press.

Although legal challenges are likely, “the mandates are legal and will ultimately be upheld,” said Peter D. Jacobson, professor emeritus of health law and policy at the University of Michigan, of the sweeping plan Biden announced Thursday to combat the pandemic.

The plan includes an emergency order through the U.S. Department of Labor’s Occupational Health and Safety Administration that will require as many as 100 million U.S. workers get coronavirus vaccines or submit to weekly testing.

More:Biden’s COVID-19 vaccine mandate could have a major impact on Michigan workplaces

It will apply to any company with 100 or more workers. People employed by health care facilities that accept Medicare and Medicaid funding also will be required to get COVID-19 vaccines, as will all federal employees and contractors, who won’t have the test option.

“OSHA is a federal agency that has the authority to regulate businesses, and particularly large employers, to protect workers against disease,” said Jacobson, who also is the director of the Center for Law, Ethics, and Health. “It can mandate, for example, that workers have to wear certain safety goggles to protect against injuries, and take certain steps for injury prevention. It’s therefore, historically, well within OSHA’s purview.”

Lance Gable, a professor of law at Wayne State University Law School, agreed that the mandates are likely to survive legal challenges.

“I think it’s on pretty stable legal ground,” he said. “The government’s in a strong position here.”

That’s because the Biden administration is using an emergency temporary standard through OSHA that was created to allow the agency to respond quickly to new, evolving threats in the workplace, Gable said.

In his view, the coronavirus pandemic qualifies.

“In the past, it’s usually been used for things like contaminants, and new chemicals that are found to be dangerous or asbestos or things like that,” he said.

“The standard is that it creates a grave danger in the workplace. So that’s going to be one of the legal questions: Does this risk meet the standard of grave danger? I think they can make a pretty strong argument that it does, considering how many people have died from this disease over the past year and a half.”

Since the pandemic began, more than 654,000 Americans have died and 40.7 million have been infected with the virus, according to the U.S. Centers for Disease Control and Prevention. In Michigan, the virus has infected at least 965,000 people and killed more than 20,000.

Dr. Howard Markel, director of the Center for the History of Medicine at the University of Michigan, said the United States has a long history of requiring vaccines to protect the public health, and those mandates largely have been upheld in the courts.

Gen. George Washington required all newly enlisted troops to be inoculated against smallpox during the Revolutionary War.

“That the Continental Army got that was a real factor in winning the war, I think,” Markel said. After Benjamin Franklin’s son died of smallpox, he became a huge proponent of vaccination and created one of the nation’s first health care funds to provide free immunizations.

There is U.S. Supreme Court precedent, too, Markel said, citing the 1905 case Jacobson v. the state of Massachusetts.

It involved a pastor named Henning Jacobson, who refused to take a smallpox vaccine even though the Board of Health in Cambridge, Massachusetts, had ordered all residents to be vaccinated or pay a $5 fine to stop an outbreak of the virus.

Henning refused to pay the fine or be inoculated, saying the mandate was unconstitutional and infringed upon his liberties. In a 7-2 ruling, the court found that the government was within its rights to require the vaccine to protect the health and safety of the public.

And for decades in the U.S., childhood immunizations for diseases like measles, whooping cough, polio and tetanus have been required for kids to attend school.

“There is good precedent for mandates surrounding contagious diseases,” Markel said. “They are socially mediated: It’s not just me who gets sick; I could get you sick.”

The University of Michigan’s Jacobson said the notion of freedom has been twisted in the pandemic by people who don’t think they should be required to wear masks or get vaccines because those mandates infringe upon their personal rights.

“It’s a perversion of the word freedom to say, ‘I can do anything I want, regardless of the consequences,’ “Jacobson said. “Their inactivity, their unwillingness to understand how their inaction jeopardizes the public health is an ongoing tragedy.

“We have become a society that is only concerned about their own choice. But personal choice has never meant that I can lawfully expose others to harm. I can’t drive drunk. I can’t drive and text. I have to go through a metal detector at the airport. When I send my kid to school, the kid needs certain vaccinations.

But the legal challenges will come, Gable said, and are likely to mirror some of the objections that have been made in the courts to other pandemic-related orders. They’ll likely center around a person’s right to bodily integrity, religious freedom and equal protections claims.

“Religious challenges have been the most successful during the course of the pandemic,” Gable said. “But because there is a testing opt-out provision … they aren’t going to be required to be vaccinated against their religious beliefs. It’s just going to require them to get a weekly test.”

“The basic premise of public health law is that they can do almost anything they want to your personal freedoms … if they feel you are a threat from a contagious disease,” Markel said. “They will quarantine or isolate you or take you to a facility.

“The second thing is that public health law is always advisory until you refuse to take the advice. Then it’s compulsory.”

And that, he said, is where the nation is now.

“There’s no law, there’s no constitutional amendment, there’s no codicil to the Declaration of Independence that I know of that gives you the right to harm others,” he said. And by refusing to take the coronavirus vaccine, it’s allowing the virus to spread more easily, infecting others and allowing it to mutate into potentially more dangerous and contagious strains.

The framers of the constitution, Markel said, “would have said, ‘Give me the vaccine,’ looked up at the heavens, and said, ‘Thank God. This is a great country.’ That’s what they would have said. … This is not a founding father issue. This is a dire public health issue.

“What I now say to the people who are talking about liberty, their rights and their bodily autonomy, is it’s a barnyard epithet, as family newspapers used to say. It’s bullshit. Just plain old ordinary bullshit.”