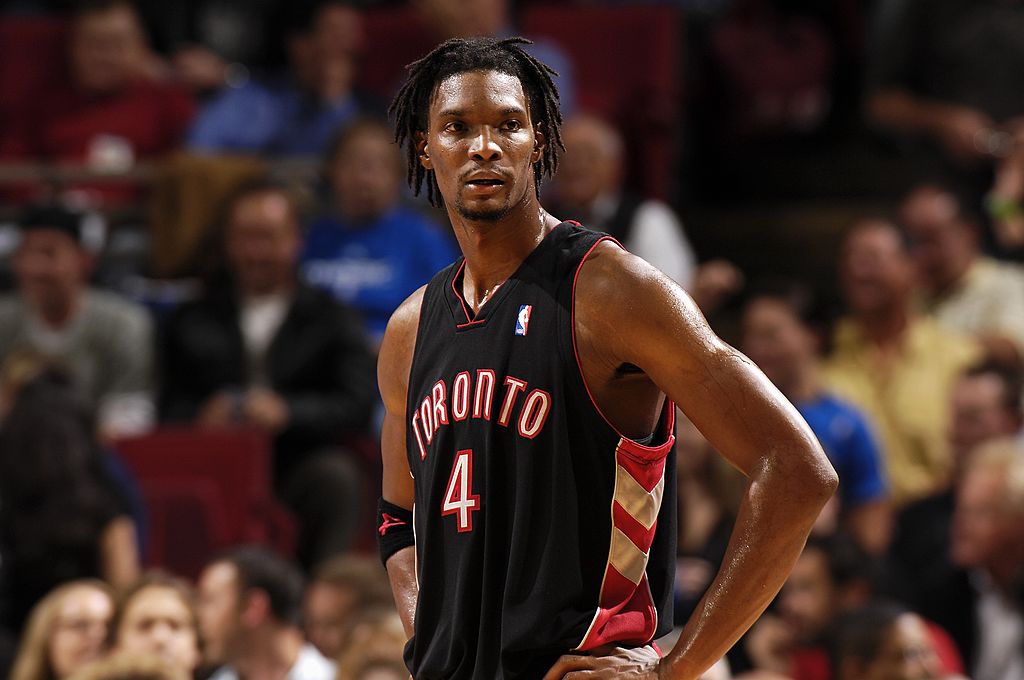 Former Raptors first-round pick Chris Bosh was officially inducted into the Basketball Hall of Fame. In one of the best enshrinement speeches of the evening, the 37-year-old celebrated his run with the Miami Heat which included two championships and four consecutive NBA Finals appearances, shared a moment with Heat team president Pat Riley, and spoke candidly about the setbacks throughout his life, including a blood clotting condition which forced him into early retirement:

Because his most significant moments came with a franchise which recruited Bosh and LeBron James in free agency to join Dwyane Wade in Miami in the summer of 2010 (remember The Decision? “Not one, not two, not three…?” How was that already over a decade ago), the first seven seasons of Bosh’s career in Toronto have become a footnote.

As the first franchise player to emerge after the departure of Vince Carter, Bosh put up his best individual stats of his career with the Raptors. He averaged over 22 points and eight rebounds in each of his final five seasons in Toronto, made the All-Star team each of those years, and was named to the All-NBA Second Team in 2007. Bosh is still at the top across several statistical categories among the all-time franchise leaders and remains the leading rebounder in team history.

Despite his contributions to the franchise, especially during a period when escaping the purgatory of the post-Vince Carter era was an accomplishment in itself, there has always been an indifference towards Bosh’s place in the overall narrative of the Toronto Raptors. It’s an indifference that doesn’t apply to the other franchise cornerstones including Damon Stoudamire, Kyle Lowry, and even Carter—who is appreciated regardless of how fans feel about how everything ended here.

The main reason for it doesn’t fall entirely on Bosh’s shoulders. Even though he led Toronto back to the playoffs in 2007 after four consecutive years of missing the postseason, the team — which won 47 games and the Atlantic Division — fell to Carter’s New Jersey Nets in six games in the first round. The following season, Toronto regressed to a 41-41 record and was dismissed by the Orlando Magic in five games in round one. Across his seven seasons here, Bosh’s Raptors only posted a winning record once and didn’t make it past the first round in two playoff appearances.

The success of the 2006-07 season, which coincided with the arrival of Bryan Colangelo, who won Executive of the Year after overhauling the roster by trading for point guard T.J. Ford from Milwaukee and hitting on free agency signings including Jorge Garbajosa and Anthony Parker, appeared to set the Raptors on a path of contending.

Instead, the front office was never able to replicate the magic of the 48-win season. Injuries to Garbajosa and Ford scuttled the team’s plans. Number one overall pick Andrea Bargnani did not pan out. The team’s many attempts to pair Bosh with a second star (remember Jermaine O’Neal’s brief stint here? Shawn Marion?) fell short. The Hedo Turkoglu free agent signing was a disaster.

In many ways, Bosh’s Toronto tenure mirrors Carter’s run with the team. The Raptors were unable to ever build a consistent winner around their star. But Carter’s impact went beyond the one playoff series he won here. He catapulted to global stardom as the most exciting player in the league and captured an entire generation of fans with his 2000 Slam Dunk contest performance. Films like The Carter Effect have helped explain his impact on basketball in Canada to a new audience. Bosh became the forgotten follow-up act.

While his era doesn’t stack up against the other all-time franchise players, it is impossible to talk about the Toronto Raptors without acknowledging Bosh’s contributions to the overall story. The indifference towards the former Raptors forward permeated into this weekend’s proceedings. It certainly didn’t provide the same level of excitement for the Raptors fan base as Vince Carter and Kyle Lowry’s Hall of Fame inductions will eventually bring.

In the always popular jersey retirement debate, Bosh’s name is also the one most frequently met with indifference. It will depend on how tight-knit the franchise wants to keep their level of excellence, but recognizing everyone else but ignoring his contributions would be akin to skipping an entire chapter in telling a story.

He might not be anyone’s favorite Raptor of all time, but Chris Bosh’s place as an all-time Raptor should feel more secure than it presently is.

As someone who watched Ben Simmons hit three-pointers for several offseasons, it’s always best to manage your optimism towards any summer workout videos. But how can you not watch the video above and not get excited about what Scottie Barnes will bring to the team. The offence will be a work in progress, but the Raptors have the potential to be an absolute terror on the defensive end this season.

And lastly, the Raptors are officially back in Toronto

This week, the team officially secured permission from the federal government to return to Toronto and play their home games at Scotiabank Arena for the 2021-22 season. This has felt like a foregone conclusion since the NBA schedule was announced and after MLSE announced its policy to only allow fully vaccinated fans in the arena for the upcoming season. In an official statement, the Raptors expressed their hopes of hosting games this season with full-capacity crowds, but the specifics of those plans will not be confirmed until a later date.

So, let’s say goodbye to the Amalie Arena era and welcome the Raptors back to Toronto. Players are already making their way to the city in preparation for training camp, which starts in two weeks. The first game back at Scotiabank Arena will take place in less than a month when the Philadelphia 76ers visit for a preseason game on October 4th. It’s been a long journey back to Toronto, and while we are still living in a pandemic, it’s a relief to see the franchise be able to finally plant its flag at home once again.