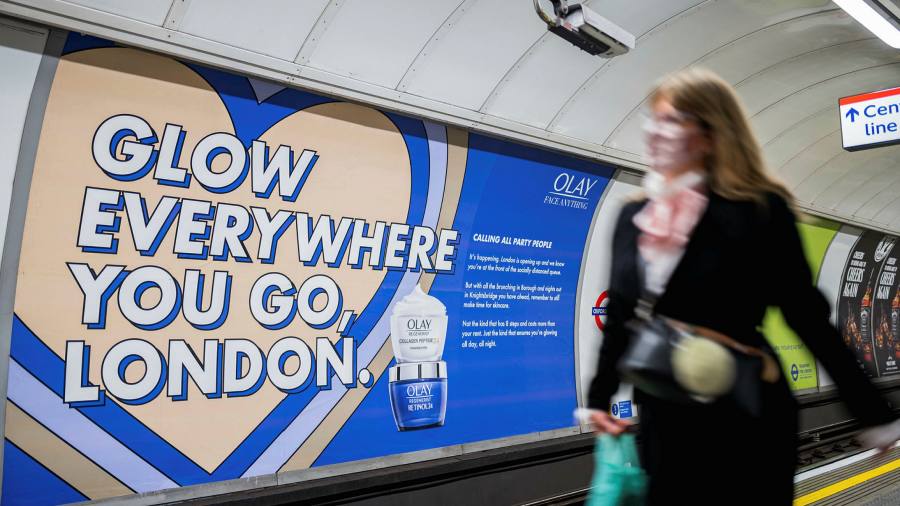 “Welcome back to the glorious commute.” The tongue-in-cheek slogan emblazoned on London Underground stations, carriages and escalators by mobile phone network EE is one of the many catchlines that advertisers have devised to mark the return of the slog to the office.

Whether workers will ever resume commuting five days a week is a question that is haunting not only city centre merchants and commercial landlords: if the shift to homeworking endures, it will also reshape outdoor advertising.

Advertisers spent $40bn globally on so-called out-of-home media in 2019, before Covid-19 ravaged the sector — a rise of almost 60 per cent from a decade earlier, according to media buyers Zenith.

As television and other media audiences splintered, billboards and posters have retained their ability to reach broad sections of the population. Crammed platforms and carriages are an especially effective way for brands to win eyeballs.

But the channel was particularly hard hit when lockdown restrictions were imposed at the onset of the pandemic, prompting advertisers to slash spending. Billboard sales recovered as traffic returned but total expenditure on out-of-home declined 28 per cent last year to $29.1bn, according to Zenith.

Jean-François Decaux, co-chief executive and chair of JCDecaux, the world’s largest outdoor advertising company, said this year had also been “very tough”, noting restrictions had been reimposed in places including Melbourne and Sydney.

Still, he added: “The good news is that as soon as the restrictions are lifted, business bounces back very quickly.”

There have been tentative signs of a rebound in some markets. Transport for London said that last Thursday was the busiest day on its network since the pandemic began, although the 2.17m journeys on the tube was still only 54 per cent of 2019 levels. The picture was similar on New York’s subway system on the same day, according to the Metropolitan Transportation Authority.

“It’s not an issue in emerging countries — Latin America, Africa, or eastern Europe — people are hungry and they want to get back to the office,” Decaux said. “Return to the office is slower in America . . . the older economies in Europe are more or less on the same page — three days a week.”

Rival media owners said advertisers remained cautious about outdoor media. “People are still not out and about in the way they were two years ago,” Carolyn McCall, chief executive of ITV, the UK’s biggest commercial free-to-air broadcaster, said. “TV has definitely benefited from that.”

Investors, too, are circumspect. Shares in Paris-based JCDecaux have gained 50 per cent over the past year, but they remain lower than they were at the start of 2020.

Those in US-based Clear Channel Outdoor, the second-largest company in the sector, have recovered 70 per cent in the past year, but are still down 60 per cent over the past five years. The company carried net debt of about $6.2bn as of the end of June, according to S&P Capital IQ, compared with a market capitalisation this week of $1.2bn.

New world of work and play

The pitch from the outdoor ad industry is that the audience is coming back, just in different places and at different times of day.

“Commute is one element, but of course theatre, sport events, music events, clubs are back,” Adrian Skelton, managing partner at Talon Outdoor, a specialist out-of-home media company whose clients include McDonald’s and Google.

Matthew Dearden, a former president of Clear Channel Europe who founded out-of-home company Alight Media, said advertisers could still target affluent office-based workers. “Obviously you can’t get them as they’re going upstairs to their attics, but they’re out and about more than they were before in their local area.”

For some advertisers, buses and trains are more appealing than ever. Laxman Narasimhan, chief executive of Reckitt Benckiser, said the maker of soaps and disinfectants was advertising more on public transport because prospective customers were particularly hygiene-conscious in such environments.

“We want to be sure we are present in places where people have a high degree of germ sensitivity,” he said. The company’s Dettol brand launched a campaign telling London Tube passengers it was “here to support your journey”, touting hand sanitiser freely available at stations.

Digital out-of-home advertising holds particular promise, allowing the same space to be sold to multiple advertisers with a premium charged for video messages.

Gill Reid, head of out-of-home at media agency MediaCom UK, pointed to how public sector clients used the medium to promote health campaigns during the pandemic.

Messages were tailored to localised restrictions in particular areas and could be updated within hours of the rules changing. “That shows a lot of clients how [digital] out-of-home could and should be used,” she said.

Still, Christophe Cherblanc, head of media sector research at Société Générale, said there was little doubt that the decline in commuting would be harmful for advertising on transport networks. “Net net, it would be amazing if there were not fewer eyeballs,” he said.

Workers going to and from offices were vital for media owners in particular locations, he noted. “Look at the Paris to La Défense line: it’s largely commuters.”

Zenith forecasts that advertisers globally will spend about $33.8bn on out-of-home advertising of all types this year, which would be 16 per cent lower than 2019 levels. It has pencilled in $37.5bn for 2022, still lower than the pre-pandemic total.

There are some signs that the industry is at the start of a strategic pivot to suburbs and smaller towns. JCDecaux last year bought a small outdoor advertising business in western France, Abri Services Media. Decaux said the acquisition was to “enhance our coverage in what we call second and third-tier cities”.

You can still get the audience, but you’re buying it in the smaller towns and suburbs, rather than the city centres”

“We need to assess whether it [work from home] is a short-term fashionable exercise or whether it’s a long-term trend,” he added.

Dearden, whose company runs bus shelter advertising across South Yorkshire in England, said: “There are lots of different data sources, some of which contradict each other, but the underlying trends are similar: travel into major city centres is down quite a lot, whereas travel into outer cities is only down a little bit, and travel where people live is up quite a lot.”

“You [as an advertiser] can still get the audience, but you’re buying it in the smaller towns and suburbs, rather than the arterials and city centres.”

Incumbent operators were particularly focused on big cities, he added, especially when it came to investment in digital. “Even today, over half of the roadside digital screens in out-of-home are in the top five [UK] cities. But that’s only a sixth of the UK population.”

Yet Decaux said large cities would retain special appeal for advertisers. “The theatres, cinemas, bars and restaurants — all that remains unique. I think the big cities will not lose as much as people think.”

And for now, even the tepid recovery in commuting to urban centres has been a comfort to the industry. Skelton of Talon said: “That three-day commute, versus zero, is such a big uplift in audiences that it’s given clients much more confidence.”