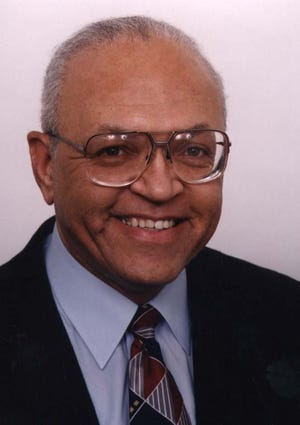 Mr. Johnson sold majority ownership of the auto group to his longtime employee Greg Stahl in 2001 and retired to Florida the following year. The Bob Johnson Auto Group, founded in 1981, now has 17 locations, most of which are located within the Rochester region. With more than 1,200 employees, it is one of the largest family-owned dealership groups in the nation.

The company, owned by Stahl and John Love, consistently finds itself on the Greater Rochester Chamber Top 100 list each year. The list ranks Rochester’s fastest-growing companies, and Bob Johnson was ranked No. 11 in 2020.

In a 2003 Democrat and Chronicle article, Mr. Johnson said his proudest honor came in 1998 when he was nominated by the New York State Automobile Dealers Association for Time magazine’s Quality Dealer Award. Criteria for the award includes sales, leadership, profitability and customer satisfaction.

“Bob was just a class act,” said Brad McAreavy, president of the Rochester Automobile Dealers Association, who first met Mr. Johnson in 1998. “He was a first-class gentleman and a very easy-going man.”

Often, his friends said, he would quietly help people in need — employees, friends and strangers.

Mr. Johnson left high school at 17 to join the U.S. Air Force and received an honorable discharge after serving for four years. After he completed his GED, he enrolled in junior college and later earned his bachelor’s degree in business management and accounting.

The tipping point in his professional life came when he purchased a new car from an African-American friend who owned a dealership in Wisconsin, according to a news release about Mr. Johnson from his alma mater, SUNY’s Empire State College. The transaction inspired his entrepreneurial spirit. After he completed a two-year training program with a Chevrolet dealership in Indiana, Mr. Johnson was awarded a Chevy franchise in Buffalo, which he relocated to Rochester in 1985.

Former Rochester Mayor Bill Johnson, who was not related to Mr. Johnson, said the two first met in the mid 80s and that after moving to Rochester, his late friend quickly became involved and engaged in the community and devoted himself to building his business.

“He was a very nice man, which is atypical as a businessman,” Bill Johnson said. “He was always upbeat and positive. That’s how he lived his life and how he conducted his business.”

Bill Johnson laughed as he recalled how he is often mistaken for his late friend.

“People come up to me and tell me, ‘I know you. You’re Bob Johnson,'” Bill Johnson said. “I say no, but that I wish I was. He would be the kind of father and brother anyone would want to have.”

After Mr. Johnson moved to Florida, the two men kept in touch and spoke regularly. Every spring, Bill Johnson said he would visit his friend in Sarasota as he traveled south for baseball’s spring training.

Laura Barnett remembered her father Mr. Johnson as a loving and affectionate man who loved to laugh. He was ambitious, hard-working and always willing to learn, but was also personable and friendly, said Barnett, who also lives in Florida.

“Dad helped me to learn and experience new things during our vacation time,” she said, adding how much he loved to travel around the world.

Mr. Johnson has served on three college boards: the Empire State College of New York, Nazareth College in Pittsford and Ringling College of Arts and Design in Sarasota, Florida. Mr. Johnson and his late wife Carol created a scholarship for minority students with financial need to attend the SUNY school. In 2014, the Empire State College honored him with its Citizen Laureate Award.

He was also a longtime board member of the Urban League of Rochester.

Mr. Johnson had a pilot’s license, and his own airplane, according to his obituary.

Longtime friend Eleanor Whitte of Rochester recalled her first time flying with Mr. Johnson in his private airplane as he served as a co-pilot.

“He showed me all of the instruments, took off then turned around and started talking to me,” she said. “‘Who’s flying the plane? Shouldn’t you be keeping your eyes on the road?’ I asked and he just laughed. It was a great experience.”

Whitte met Mr. Johnson “years ago” through his late wife Carol. The two remained friends after he moved to Florida. She regularly visited him in Florida and recalled that “he’d always have you laughing.”

“He was a remarkable man — very generous and humble,” she said. “He cherished his friends back in Rochester.”

On his last visit to Rochester, in 2014, he made sure to visit friends and former employees back at the dealership, she said. That’s just who he was, Whitte said.