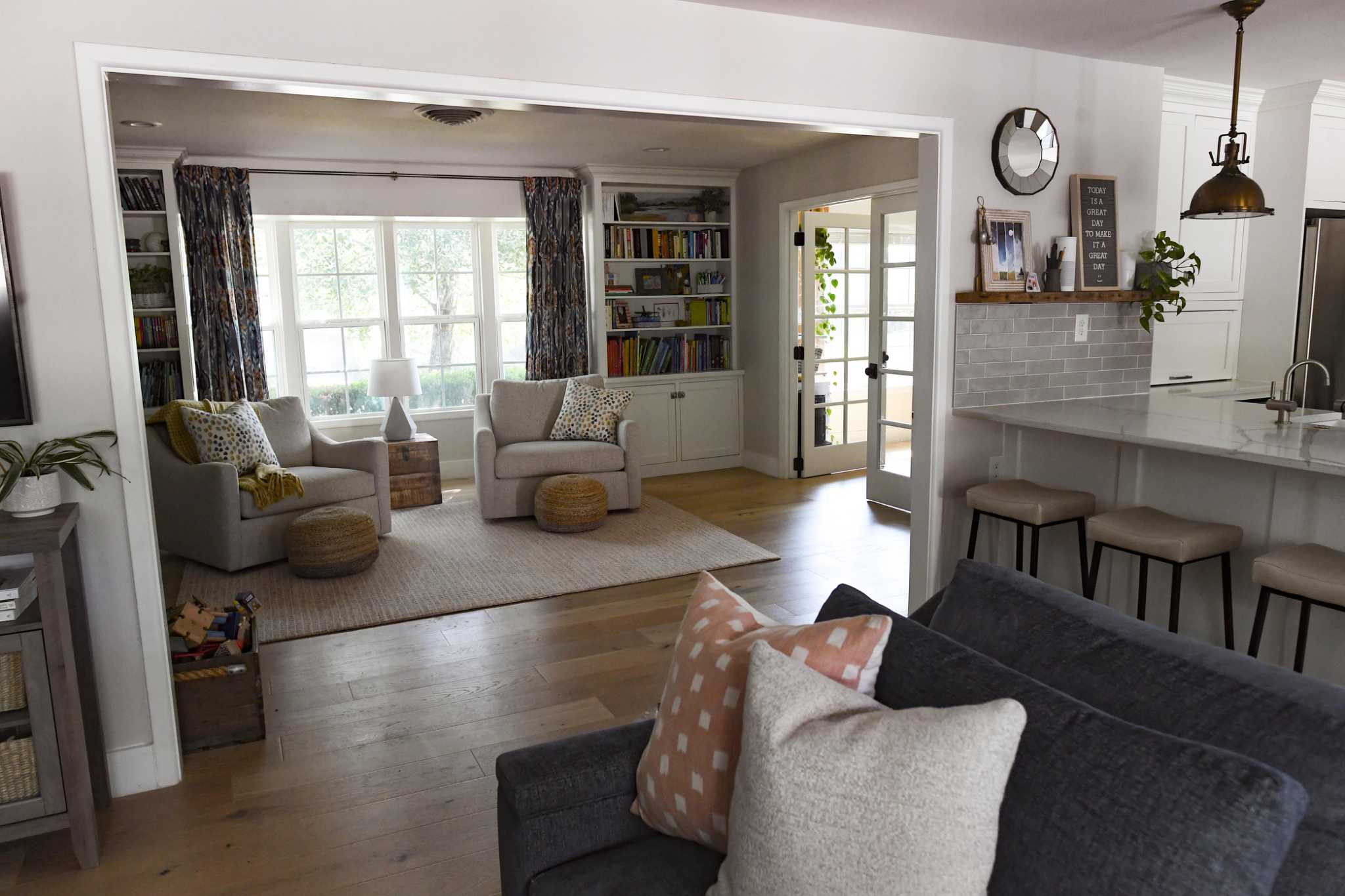 It wasn’t love at first sight. After moving to San Antonio in 2016, Tommy Percival, an Air Force heart surgeon, and his wife Shawna, an interior decorator, were renting when their real estate agent told them the house was for sale in the Northwood neighborhood just inside Loop 410 between Broadway and Harry Wurzbach.

“I said no because it was so ugly,” said Shawna, who owns Styleberry Creative Interiors. “The brick was orange, the siding was yellow, there was even an ugly decorative metal screen on the front door.”

But when she went inside the four-bedroom, 2 ½-bathroom midcentury ranch home, she was thunderstruck.

“From the minute I walked in the door, I was overwhelmed with all this positive energy,” she said. “I just knew the house was going to be be ours. We’d also fallen in love with the neighborhood. We loved the large trees, the wide streets where my kids could ride their bikes and the quiet.”

Shawna designed the home’s to-the-studs renovation in 2016. The Percivals wanted a place for their young kids to play, a home office for two and additional pantry space, and they wanted to open up the home for better flow and more light.

They got all that and more upon completing the large-scale redo of their 2,500-square-foot house — although it took a lot of work to get there.

The house, they discovered, had nine different flooring surfaces. She counted. So one of the first decisions they made was to replace most of them with 7 inch-wide planks of European white oak.

“The Texas style doesn’t resonate with me so, coming from California, I wanted it to feel modern, light, bright and airy,” she said.

Initially, they made the formal living room the children’s playroom. As the kids got older and about the time the pandemic began, they turned it into a comfortable reading room with two new built-in bookcases she designed and a pair of oversize upholstered armchairs.

On ExpressNews.com: From cookie-cutter to custom: How one San Antonio couple upgraded their builder-grade tract home

They also turned the adjacent formal dining room into a his-and-hers home office, adding glass paneled doors between the rooms that can be closed for privacy. One wall is partially covered in vertical shiplap panels painted in a color she described as “almost black.”

“It’s one of those things that really draws your eye in, instead of it being just a plain white office,” she said.

Although Shawna’s design company has an office downtown, once the pandemic hit and schools closed, she spent most of her time working from home. “I had my desk and we set up desks for the kids,” she said. “We all worked here together.”

If you’re keeping score at home, this left the couple without a dining room, which is just the way they like it.

“I’m not a formal person,” she said. “Dinner parties are not where I spend my time. I’ve also noticed that, with my clients, we’re turning a lot of formal dining rooms into what I call flex family spaces.”

Also, she said, since their kids are so involved with sports, they rarely sit down to eat a family meal together.

“I cook almost every night, but we have first dinner and then second dinner,” she said with a laugh. “And even then, the kids usually eat at the kitchen island.”

When they do entertain, they tend to do it either in the living room in the old family room or outside on covered patio adjacent to the new pool they installed.

That living room is located at the center of the house and consists of a comfortable seating area facing a gas fireplace with the large, open kitchen adjacent to that.

Shawna refaced the fireplace with handpicked flagstone. “I laid the stones out on the floor nearby and pieced this whole thing together,” she said. “And then I was on site the day they set the mortar to make sure everything was where I wanted it to be.”

The mantle is a beam of reclaimed wood, which also fits in with her style. “I bought it from a lumber yard north of the city,” she said. “I have a heart for the mountains. Some day that’s where I’ll be. Bringing in these warm wood tones really warms the house and catches your eye.”

With the wall between the two rooms gone, the kitchen and family room now flow together easily.

“The kitchen footprint is almost exactly the same as it was originally, so it was already pretty big for a house of the era,” she said. “But when we removed the wall it completely opened things up.”

They replaced what had been a peninsula with a central island topped with quartz that looks surprisingly like marble.

On ExpressNews.com: San Antonio couple find dream home when they fall in love with their Hollywood Park house flip

“My intention with all the houses I design is to help families live their life without stress, so marble is out of the question,” she said. “In terms of cleaning and staining, it is horrific to maintain. My kids have gotten Sharpie on this, and I’ve been able to get it out.”

They also moved the refrigerator and range. “We reconfigured things to get the working triangle in a way that there’s room enough for the four of us to be here at the same time,” she said.

While the kitchen is mostly white, the subway tile backsplash is a rich gray, which adds some much needed contrast and warmth to the room. Another trick she’s used with clients before was to place the microwave below the counter.

“For me, it reads ‘production house’ when you have the microwave over the range,” she said. “I don’t like to see that; I like to tuck the microwave away.”

Around the corner from the kitchen they transformed what was a very — very — small half bathroom into a nice size pantry. “When it was a bathroom, you couldn’t open the door all the way because it would hit the sink,” she said. “But it’s a large enough pantry that I can keep almost all my nonperishable foods in it.”

The master bath is the one area of the house where Shawna decided to go with actual Carrara marble, installing it atop the standalone vanity and in the full shower that replaced the bathtub. It is a decision she has come to regret.

“You cannot clean it with anything that’s very strong, or else you’ll etch it,” she explained. “Even around the sink faucet, the marble yellows because our water contains so many minerals. It’s beautiful to look at, but I would never want to live with it again.”

In the master bedroom, three of the walls are painted a calming gray while the fourth is black — a spur of the moment decorating decision by Shawna.

“I do a lot of my own painting, and my husband was on call one night, so I just thought I’d go for it,” she explained. “It wasn’t his favorite, but I think the contrast makes the room feel bigger.”

Although they love their renovated home, their choices were affirmed when the couple they purchased the house from stopped by one day after church. “They said they were just delighted to have another family move into the house they’d loved and where they’d raised their own family,” she said.

Perhaps, she added, that’s where all that positive energy she’d felt the first time she entered the house had originated.