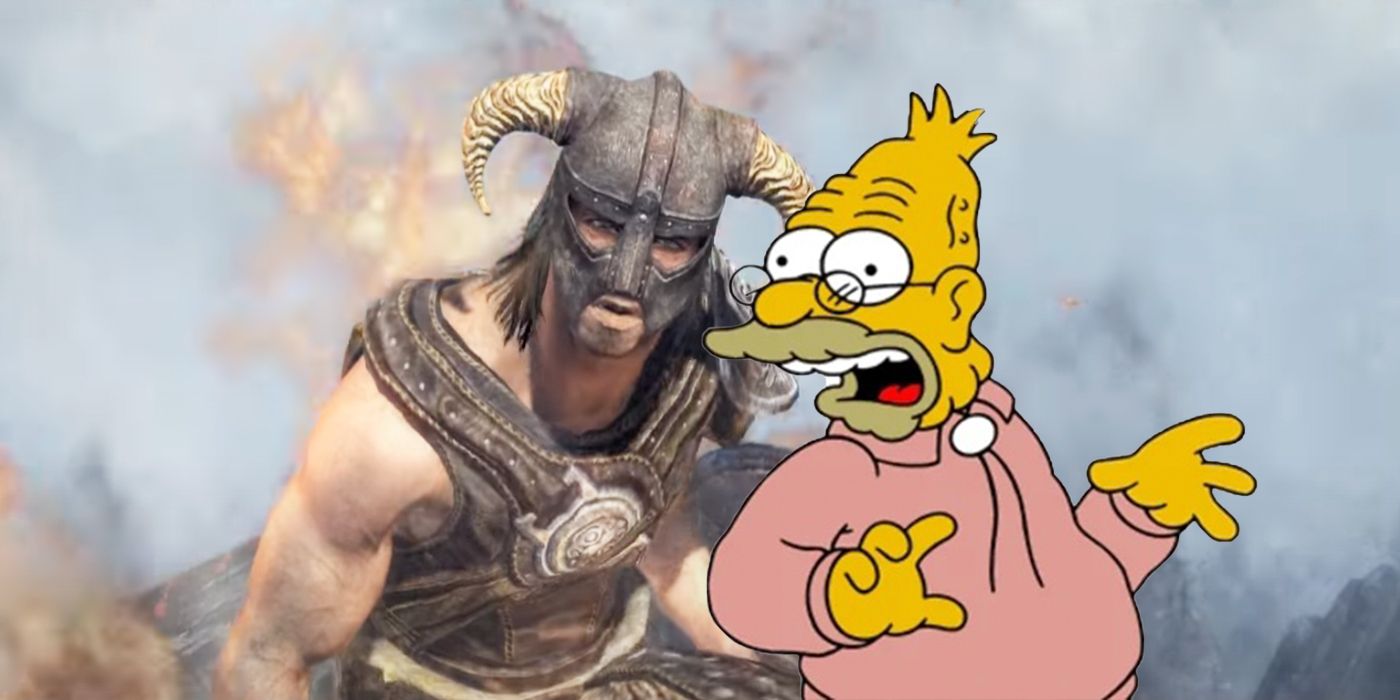 A funny Simpsons-themed Skyrim meme recently graced the internet, pointing out some of the game’s world-building and RPG elements.

A recent The Elder Scrolls V: Skyrim meme featuring The Simpsons has recently surfaced on Twitter, drawing attention to one of the game’s role-playing problems: the guilds and factions system. The robust and immensely popular Bethesda game offers players a multitude of different adventures and diversions, but the more casual approach that the game takes to its RPG systems has disappointed some fans.

After a brief introductory set piece, Skyrim lets its players roam the massive open world and join a number of different clans, clubs, and shadow organizations. Players can even side with Skyrim‘s bloodthirsty vampires if they so desire. Electing to become part of these groups can impact gameplay in many different ways, giving gamers access to various different weapons, powers, and other special skills. Compared to other western RPGs, Skyrim‘s structure is surprisingly flexible, allowing players to join multiple factions at the same time even if the groups are ideologically opposed. This can make for a fun gaming experience as players can get access to most story and gameplay content in a single playthrough, but it can also arguably weaken the feeling of immersion for some.

Related: Skyrim: All Pros & Cons Of Joining The Thieves Guild

A funny and insightful meme shared by the Nexus Mods Twitter account shines some light on this incongruity. In the meme, The Simpsons’ family patriarch Grandpa Abraham Simpson is shown looking through his business cards while sitting in one of Skyrim‘s many taverns. The business cards are indicated to correspond to a variety of different guilds, including Skyrim’s disturbing Dark Brotherhood guild and the comparatively more peaceful Bards College.

The meme, while humorous in its intent, brings Skyrim‘s potential for absurd and unrealistic storylines into focus. After all, it seems contradictory for a character to be a member of a morally upright group like The Dawnguard while partaking in unsavory activities with a faction like the Thieves Guild. Since these groups play a major role in the world-building of Skyrim, it is likely jarring and immersion-breaking to see a lack of consequences for transgressing their various agendas. For some RPG purists, this could be enough to write the game off entirely, especially when other role-playing classics like Fallout: New Vegas feature factions in ways that offer realistic consequences.

Skyrim is a game that is far from perfect, and a lack of commitment to some of its more complex role-playing features can be seen as a flaw – but the freedom that Skyrim offers its players allows for diverse and unique stories, similar to what traditional tabletop RPGs offer. While some think it ludicrous for an esteemed Arch Mage to moonlight as a deadly assassin, others will find it titillating and intriguing. Much of the storytelling in Skyrim exists in the player’s head, so this The Simpsons meme, while poignant, won’t stop fans of the game from creating bizarre, enjoyable narratives.

Next: Skyrim: All Pros & Cons Of Becoming A Werewolf

Breath of the Wild Player Discovers a Way To Increase Updraft

Nick Rodriguez is a freelance gaming news writer for Screen Rant. He was drawn to video games and video game discussion since playing Spyro the Dragon on the PlayStation 1. More recently, his favorites have included Disco Elysium, Red Dead Redemption II, Kentucky Route Zero, and the Mass Effect series. Games like these and the powerful emotions they elicit are what inspire Nick to write about games professionally, with the ultimate goal of nurturing an appreciation of games as powerful works of art among gaming fans and beyond.