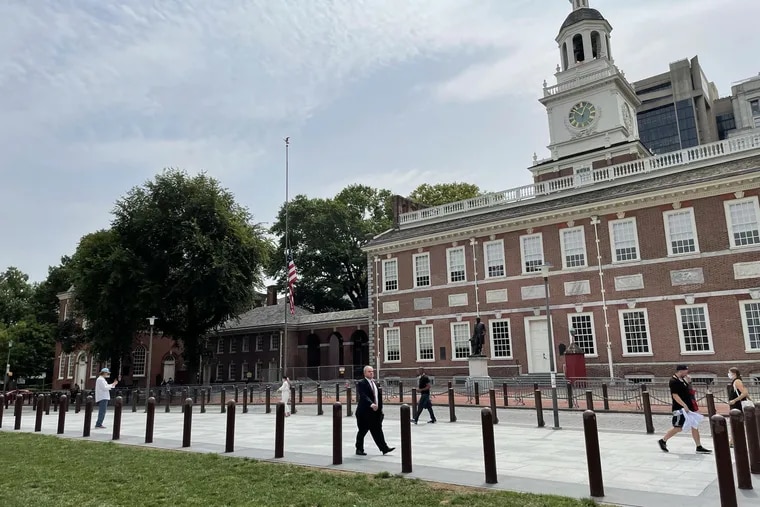 In the summer of 2001, a friendlier, greener version of Independence Mall was starting to take shape. The original park had been a strictly regimented space, a lineup of formal plazas and colonnades that were off-putting to tourists and local residents alike. The goal was to knit the three-block expanse back into the surrounding neighborhoods, to make the mall feel more like a natural part of Philadelphia, rather than a stray piece of Washington that had been jammed into the city’s narrow colonial streets.

Plans called for museums, a cafe, maybe even a playground to serve local children. At the corner of Sixth and Market, a lavish new visitor center was preparing to open, reestablishing a link with Center City that had been lost in the ‘50s and ‘60s when dozens of 19th-century buildings were demolished to create the mall. There was hope that the great gash in the heart of Philadelphia might be healed.

Fearing more strikes after the terror attacks in New York and Washington, the U.S. went into lockdown, adopting a level of security not seen since World War II. Federal sites around the country hastily set up security cordons, grabbing whatever they could — Jersey barriers, concrete planters, bike racks. We learned to remove our shoes at airports while security personnel scrutinized every item in our carry-ons. Government offices, as well as many private ones, began installing metal detectors and security cameras, and demanding proof of identification to enter. Any symbol of America was considered vulnerable in those early days.

As the place where the U.S. Constitution was hammered out — the place where America’s democracy essentially got its start — Independence Hall was seen as a potential target. Government workers scrambled to install protective barriers around the building and the rest of the mall. Twenty years later, that entire area effectively remains a high-security zone.

The architecture of security is one of the most visible legacies of 9/11, and it has profoundly altered how we experience public space. But there are few places in America where the symbols of freedom and the restrictions borne of our desire for safety clash so sharply as they do on Independence Mall, one of America’s national parks.

Even in a city rich with historic sites, Independence Hall was always a special place. Its front door faces directly onto Chestnut Street, a busy crosstown street. The 18th-century building served as government offices until City Hall opened in 1901. Before 9/11, you could peer into the windows or casually stroll through the archways where founding figures like Ben Franklin and Thomas Jefferson once gathered. Now the building sits barricaded behind layers of security, and the sidewalk on the south side of Chestnut Street is closed to pedestrians.

As barriers and screening areas have become a regular part of our daily lives, some security experts and designers have begun to question their proliferation. The Harvard security expert Bruce Schneier argues that the threat to places like Independence Mall has been grossly exaggerated and that expensive installations merely serve as “security theater.” Other experts believe that some precautions are justified but prefer to soften their effect by disguising the barriers and integrating them into the landscape.

“We often respond to a security threat by doing what we think is necessary, putting up security fences and closing off streets,” Marcel Acosta, the head of the National Capital Planning Commission in Washington, said during a panel held in May on new approaches to security. “But it’s crucial that we now step back and ask questions about how we promote balance.”

To that end, his commission has pushed federal agencies in Washington to come up with security designs that don’t scream security. They are now more likely to use elements that double as public amenities, such as benches or low seating walls.

Independence National Historical Park, the entity that oversees the historic district, has taken the opposite approach, ringing the mall with heavy-handed, in-your-face fortifications. Rather than invest in a customized design plan to soften the look of its security, park officials have largely relied on a single defensive feature: metal poles, called bollards.

There are now so many rows of bollards on Chestnut Street, between Fifth and Sixth, that they now look like soldiers lined up for review. Bollards edge the sidewalk curbs on both sides of the street, while a third row runs along the lawn next to the Liberty Bell Center. In July, the park expanded the effort to Market and Arch Streets, at a cost of $2 million. These new barriers fence off a grassy area that was meant to be welcoming space to walk or play.

Philadelphia spent over $300 million on the mall’s redesign between 2000 and 2010, yet the placement of bollards and other security has been treated as an afterthought. Some bollards even run down the center of the sidewalks. Groups of bollards block off street corners, forcing pedestrians to weave through the poles to cross. At Sixth and Market, several bollards partially obscure the public artwork on the facade of the Independence Visitor Center. The piece, Indelible by Alison Sky, addresses America’s original sin of slavery.

Many people connected with Philadelphia’s tourist economy are appalled by the result. “I continue to be upset when I walk down Chestnut Street in front of Independence Hall and all I see are bollards with chains and threatening-looking officers,” said Thomas A. Caramanico, director of the Independence Historic Trust, a friends group that raises money to supplement the park’s budget, and chair of the Independence Visitor Center board. “It is not welcoming at all.”

At the same time, visitors must contend with a motley assortment of temporary hardware elsewhere on the mall. At Independence Hall, visitors are still screened under a faded tent, rather than in a permanent shelter. After passing through that checkpoint, they are told to wait in a corral fashioned from bike racks, an arrangement that park rangers call “the pen.”

Bike racks seem to have become the park’s all-purpose defense system. In response to the unrest that followed the murder of George Floyd in 2020, the Park Service beefed up the bollards around Independence Hall by adding a double row of bike racks. The racks encircle the building and limit access to the public square on Walnut Street. As of last week, the racks were still in place, although a park spokesperson, Andrew McDougall, told me they would be taken down “soon.”

The park’s bike racks have had a way of sticking around. The flower bed next to the President’s House site, which includes a memorial to the enslaved Africans who labored in George Washington’s household, has been fenced off with bike racks since 2015. That makeshift structure is secured with what looks like a sack of sand. It is hard to figure out what purpose the arrangement serves, although it would surely never stop a terrorist.

Several distinct issues are at play here: Does Independence Mall still need to be protected at such a high level from a potential attack? If the answer is yes, should we continue to use bollards and bike racks? Or, can we design barriers that don’t make this shrine to liberty look like it’s surrounded by a horse paddock?

No one can fault the officials who ordered the security measures in the days after the 9/11 attacks, which took the lives of nearly 3,000 people. Philadelphia readily agreed to close the block of Chestnut Street in front of Independence Hall. But after the street was reopened in April 2003, a security consultant urged park officials to construct a high fence around the entire space, from Walnut to Race. The uproar was so great that the proposal was dropped, and the current plan for bollards adopted instead.

The advantage of bollards, McDougall said, is that they are “vehicular barriers” that can stop a truck from ramming into a crowd of people or a building. “We do a lot of high profile events” on the mall’s lawns, he said.

The Pennsylvania Historical and Museum Commission, which has reviewed the bollard projects, “found they had no adverse effect” on the aesthetics, McDougall noted. (He declined to make the park’s superintendent. Cynthia MacLeod, available for an interview.)

But security experts say that the effectiveness of bollards is relatively limited in this situation, and question whether they are merely for show. The new bollards on Market and Arch can’t stop an individual carrying a gun or bomb in a backpack from entering the mall’s lawns. And because all the mall’s buildings face city streets, they are vulnerable, too. Independence Hall is just a few feet from passing cars. If bollards make these historic buildings less accessible to the public without making them less vulnerable, then what’s the point?

“The hall is as vulnerable to terrorism today as it was on the 10th of September 2001,” landscape architect Laurie Olin told me. He believes the assortment of bollards and bike racks “is an example of middle managers ‘doing something’ and showing a response to fear, without being held accountable for the long-term effect of their actions.”

He should know. Not only did Olin oversee the mall’s redesign in 2000, he has been involved in numerous federal projects that fuse landscape design and security. Olin, who is based in Philadelphia, designed the much praised landscape plan for the Washington Monument. Instead of ringing the site with bollards, Olin used a variety of landscape elements — earth berms, ramps, and stone benches — that would prevent vehicles from driving into the famous obelisk. He designed similar landscape elements to protect the American embassy in London.

Olin believes it would be better to open the Chestnut Street sidewalk “and declare that democracy and Philadelphia are still open for business.”

Critics of the park’s security approach note that people enter a bollard-free zone as soon as they leave the mall’s grounds. Although bollards and barriers have been installed around City Hall and federal buildings, few others in the city have been given that treatment. Acosta noted that many of the grassy areas on the Washington Mall have no bollards. Indeed, we generally don’t install bollards in public parks not associated with the federal government.

“The question of how much security do we need is almost never asked,” observed Schneier, who lectures at Harvard’s Kennedy School. “We’ve invented a story in our minds that there is a terrorist threat to the Liberty Bell. But is there?”

He believes that good intelligence-gathering is far more effective than permanent fortifications.

Unfortunately, once security measures are introduced in America, they tend to continue forever. It’s one reason people still have to remove their shoes when they go through security at American airports. Europeans no longer bother with the ritual. “The security measures put in after 9/11 normalized fear,” said Sharon Zukin, a Brooklyn College sociologist who studies cities.

In Washington, the National Capital Planning Commission has been successful at pushing back against some of the more extreme security proposals made by federal agencies, Acosta said. “Independence Hall deserves the best and should be treated with respect.”

What happened 20 years ago on 9/11 will always be with us. But that doesn’t mean that the security posture we adopted in the aftermath of those terrible attacks will always make sense. Like any policy, it needs to be reviewed and updated for the times we live in.