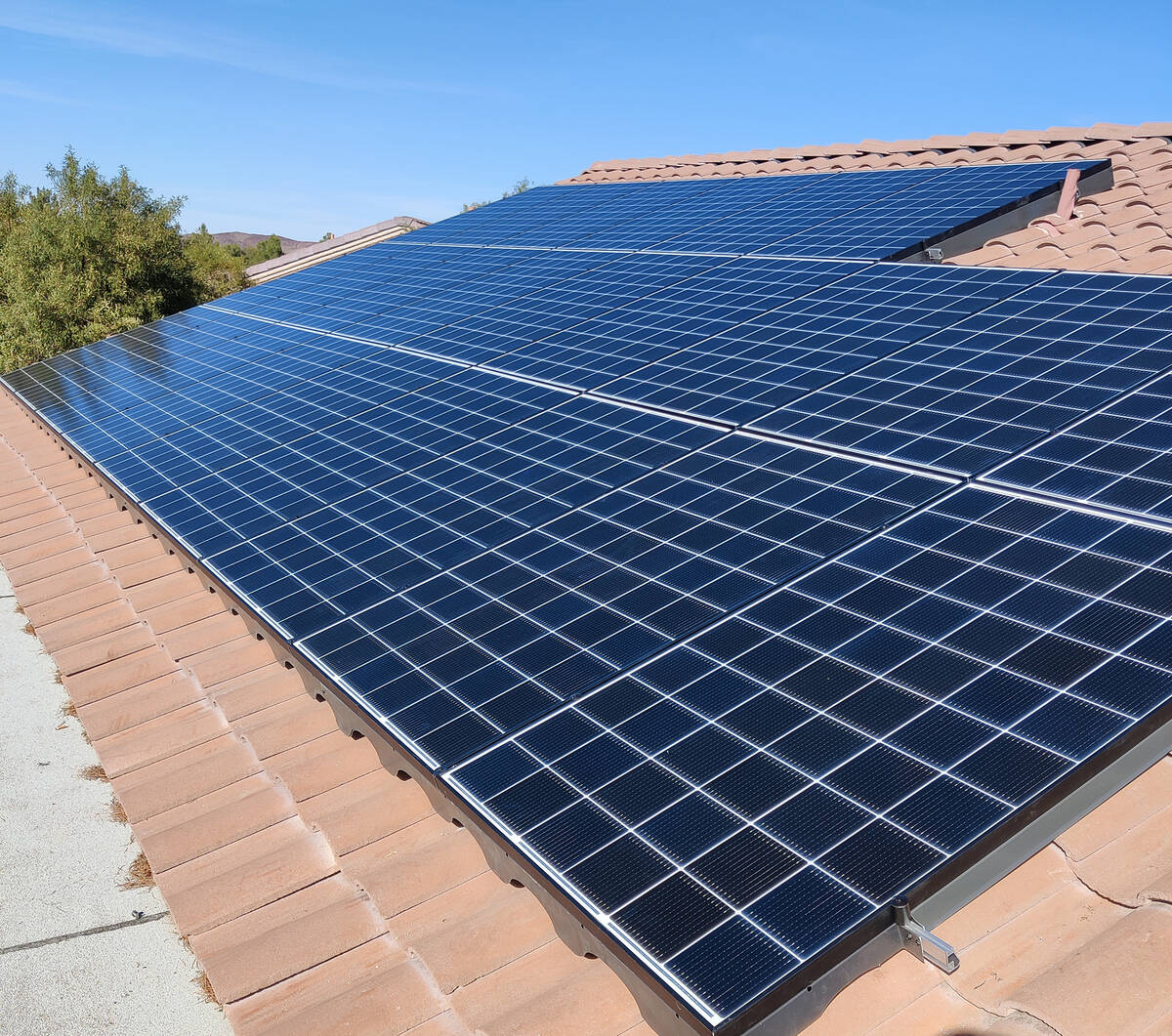 “It was more than triple what we paid in California,” Rochele Porpora says. “I knew to expect a higher bill, but it was like, ‘Oh my gosh … this is insane.’ ”

Their California home in West Garden Grove was 3 miles from the shore, with cooling ocean breezes. Unlike their energy-eating Las Vegas home in the Centennial Hills area, it didn’t have a swimming pool with four electric pumps and two-zone central air-conditioning.

Because they were new utility customers, the Porporas also weren’t able to join NV Energy’s balanced billing program, which can ease the burden for customers. Instead of paying $80 to $100 monthly in California, they were paying more than $300 monthly in Las Vegas.

Like a growing number of Southern Nevadans, the Porpora’s solution was installing a solar photovoltaic system that generates electricity.

Once the panels on their rooftop — an 11.78-kilowatt system — are connected sometime this month, the Porporas won’t have an electric bill.

They paid roughly $31,000 cash — about $24,000 when their 26 percent federal tax credit kicks in — for a system that will produce roughly 110 percent of their household electricity. The excess electricity will be banked by NV Energy and used by the Porporas at night or on cloudy days when the panels aren’t using the sun to generate power.

This connection for banking energy, called “net metering,” has a monthly fee, usually less than $20.

“It’ll be a good feeling not to have an electric bill,” says Mike Porpora, who figures his payback period on the $24K is slightly less than 10 years. “We’re looking forward to it.”

About 10 years ago, during the recession, Kowalczik was looking for a way to keep his business going and his employees working. Because commercial projects were on the decline, he turned to solar installs.

He says in his first year solar installations averaged about one a week.

“We’re doing about two a day now,” Kowalczik says, or about 40 percent of his business overall.

Like the Porporas, most homeowners tell Kowalczik they like the idea of a constant in their budget. While the utility’s rates, currently about 12 cents a kilowatt, are sure to rise, theirs won’t. The panels come with a 25-year warranty, too, and warranties on labor.

“With solar, there’s a green element to the business, too,” Kowalczik says. “Homeowners feel they are doing something for the environment, making clean energy.

“And you get to meet the homeowners, who tell you, ‘I don’t have an electric bill.’ That’s a good feeling.”

There is a buyer beware element to solar panels, however. Not every install is the same, not every panel is the same.

Here are some things you should know:

Electric bill: Have your latest bill available. It will show the prospective installer how much energy your household uses in a year, the basis for sizing a system.

Panels: Not all panels are equal. Newer, more efficient panels are rated at 380 watts or higher. Older panels can rate at 330 watts. A higher-watt panel means fewer panels on the roof and, most often, a less expensive installation. Multiply the number of panels times a panel’s wattage to get the size of a system. For example, 32 panels at 380 watts per panel equals a 12.16 kW system.

Here’s a tip: To start, the cost of many systems can be the number of panels times $1,000.

Microinverters and optimizers: These modules fit on the bottom of each solar panel and help create a more efficient system. The oldest method of installation is called string inverter, where all panels are “strung together” and then connected to an inverter located close to the utility company’s residential meter.

Microinverters convert energy right at the panel; optimizers condition DC energy at the panel and send it to a central inverter. Opt for one or the other; avoid the older string inverter installation. A microinverter or optimizer on each panel is more expensive but more efficient.

Reducing energy consumption: Upgrading insulation and appliances might be the first step. NV Energy says reducing base energy needs might help the homeowner get by with a smaller solar system and suggests a visit to nvenergy.com/powershift for incentives and offers on cutting consumption.

Estimates: The rule of thumb always has been to get at least three estimates for any project. With solar, double that. You want a written estimate that specifies the make and model of panels, the number of panels, panel layout (where on the roof they’ll be installed) and whether the company uses microinverters or optimizers.

Plus, you’ll want a financial breakdown that includes a discount for cash payment and loan offers.