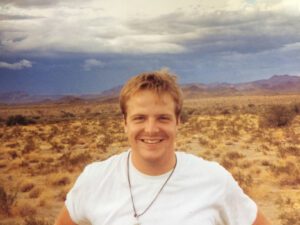 Although the remains of Fire Fighter Eugene Whalen were never recovered after he perished in the World Trade Center fires on September 11, 2001, his family was intent on ensuring that his life would be treasured and honored for generations to come. 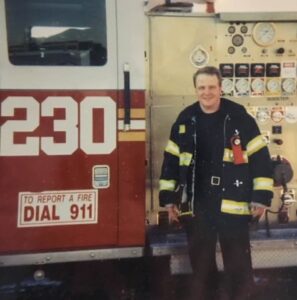 Whalen in poses with a fire truck, he was assigned to FDNY Engine 230 in Brooklyn when he died on 9/11.

Whalen’s father, (now deceased) a former deacon at St. Gertrude’s in Far Rockaway instilled in his 9 remaining children that “while the body was gone, the spirit would continue on”.

In November 2001, several friends and brothers, or his “boys” took to the shore of Rockaway in celebration of Whalen’s birthday.

Fueled by emotion and “numerous adult beverages”, the group found themselves spontaneously running into the ocean, breaking into a chorus of “Happy Birthday”.

Through the years, the “boys” later brought their girlfriends, who eventually became the wives and mothers to the children who came to know more about “Uncle Eugene”.

Once an ad-hoc event, “The Happy Birthday Swim” is now an annual tradition planned complete with food and certainly beverages on the second Saturday of each November.

The Whalen brothers share a notoriously close bond as when they moved from their parent’s home as adults, they later became roommates in an apartment above the former Harbor Light.

“When I was eighteen years old and lived up there until just after 9/11 it was a great place. I mean Eugene, Chris, Tommy, John, and Billy – six or seven Whalen brothers lived there at some point”, said brother Bobby Whalen.

This bond was further strengthened as they teamed up to form a federally recognized 501-3c non-profit “The King of Fun Foundation”, named in recognition of Eugene’s nickname.

The organization held an annual banquet at Russo’s On The Bay, ultimately raising thousands of dollars to support NY Firefighters Burn Center, the Juvenile Diabetes Foundation, Saint Gertrude’s Church, and the Salvation Army.

Upon the 9/11 anniversaries, the family tributes have evolved as the family ages and grows. 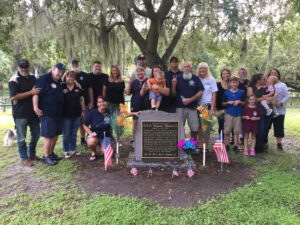 The Whalen “Florida Family” during last year’s 9/11 remembrance. Also pictured are the parents of Mark Bingham, known as the last passenger to board Flight #93 on 9/11. Bingham was among the passengers who, along with Todd Beamer, Tom Burnett, and Jeremy Glick, formed the plan to retake the plane from the hijackers. 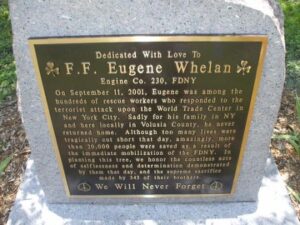 A large stone monument serves as a tactile yet sustaining remembrance of Eugene Whelan. To date, no remains have been recovered of Whelan.

In Gemini Springs, FL the “Florida family” planted a tree and placed a large stone monument as a tactile yet sustaining remembrance. They gather annually, adorning the stone with ribbons and posting pictures of the event on social media.

Instead of traveling to lower Manhattan, the local Whalen family prefers to attend homegrown tributes that have also blossomed to annual events. 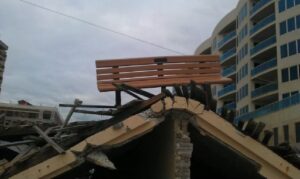 The parents of Eugene Whalen had donated a park bench to the town of Long Beach. While the boardwalk was heavily damaged, the bench remains relatively intact after Superstorm Sandy hit in 2012.

Whalen’s mother, who is now in her mid-eighties, resides upstate with her brother, in Stanfordville New York. Eugene’s parents subsequently donated a park bench to the town of Long Beach. In 2012, Superstorm Sandy badly battered the boardwalk on which the bench stood, the bench itself, remains relatively intact.  Additionally, Eugene’s name has been added to his father’s headstone.

Electing to further honor his late brother in his own FDNY career, younger brother Bobby received special permission to assume his older brother’s badge number, #3206. The younger Whalen was able to keep the number as both a fireman and a lieutenant but received a new number as a newly promoted captain of the FDNY.

All photos courtesy of The Whalen family