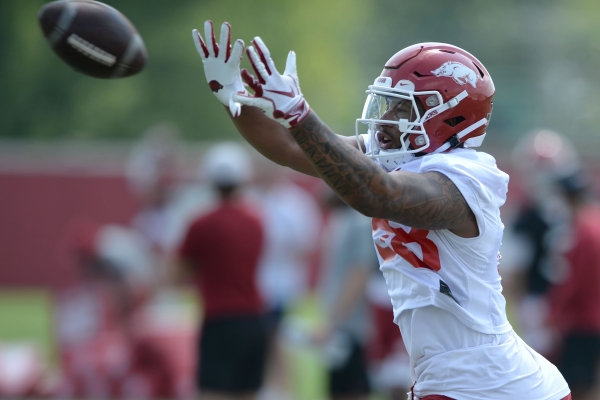 When former University of Arkansas tight end Koilan Jackson was recruited to be a Hog it was an easy decision and his recent decision to represent Legacy Letter Challenge was just as easy.

Brewer tragically lost his father Larry in a drowning during a family vacation in Hawaii in 2003, and a few hours later his mother gave him a letter written by his father.

The letter was addressed to the 19-year old Brewer and his two younger siblings.

“He was going to give it to me on that trip, so he was really writing a letter to his 19-year old son, 18-year old daughter and 15-year old son because he knew the importance of a father’s voice and a father’s words,” Brewer said. “He was taking an opportunity to kind of speak life into us. Just the timing all for me not to know about that letter until couple of hours after he died when my mom walked into the room and handed it to me and said, ‘your dad wrote this letter for you’.

“Even before I read the letter, I felt so loved knowing my dad would take the time to do that for me. I read that letter a lot but now my dads voice, his words are in my life and for the last 18 years those words have been guiding me. Big decisions, small decisions, adversity. There’s my dad staying no, you’re going to get through this.”

After he and his wife had the first of three kids in 2015, Brewer wanted to write a letter to his kids and the thoughts of helping other fathers entered his mind.

“I saw how stinking hard it was to actually get the letter done,” Brewer said. “It was through that I realized I have to help dads write this letter because I knew how valuable it was to me.”

The Legacy Letter Challenge has been well received.

“We’re further ahead than I could ever imagine,” Brewer said. “I coach dads individually. I do groups. I go speak at places.”

Being a proud Razorback, Brewer wanted to find an Arkansas student-athlete to represent the company in hopes of helping a million fathers write letters to their kids.

“When NIL came around I realized that not many deals would come the way of a third-string walk-on lineman,” Vest said.

He and his stepfather formed MWL Advisory Group.

“With my experience as an athlete we have a unique approach that allows us to tailor plans to suit individual student-athletes business goals while taking the burden off them and handling everything they want us to,” Vest said.

Vest suggested Jackson to Brewer, and Jackson became the first student-athlete to sign a name, image and likeness agreement to support fathers.

“I gave my pitch to Koilan, he said ‘Man, I had already made up my mind that I was going to do this, ’ ” Brewer said.

“It’s really crazy because it’s like a mini-me,” Koilan said. “Watching him grow up and watch his mannerisms like copying me. The older he gets it’s like the closer he gets to being like me. I think that’s one of the coolest things in the world.”

According to the 2020 U.S. Census Bureau, 18.3 million children, 1 in 4, live without a biological, step, or adoptive father in the home. Jackson sees Legacy Letter Challenge being a way to promote fatherhood.

“A father figure is a lot more than what people make it,” Jackson said. “It’s hard for a woman to raise a man, not saying they can’t do it but it would a lot easier for a dad-father figure in their life to like show them the ropes of how they live their life.”

Jackson is thrilled to do his part in helping Brewer’s goal of reaching a million fathers.

“For him, it really wasn’t the money, it was like, ‘Man I believe in this mission I want to help you get to a million dads,’ ” Brewer said. “He said ‘I want to be a great dad like my dad was for me.’ ”

Businesses are seeing the benefit of partnering with Legacy Letter Challenge.

“One of the things that’s pretty neat is business are buying it for their employees,” Brewer said. “It’s a very competitive job market so businesses are looking for that edge.

“A lot of financial advisors and insurance agents are buying it for their clients as a gift.”

Brewer plans to tutor some major league baseball fathers after the season.

“I helped the Arizona Cardinals’ vice president write his letter to his 12-year old and 9-year old daughters,” Brewer said.

“There’s always a way,” Jackson said. “Just keep working. Be your best at everything you do That’s one of my biggest takeaways from my dad.”