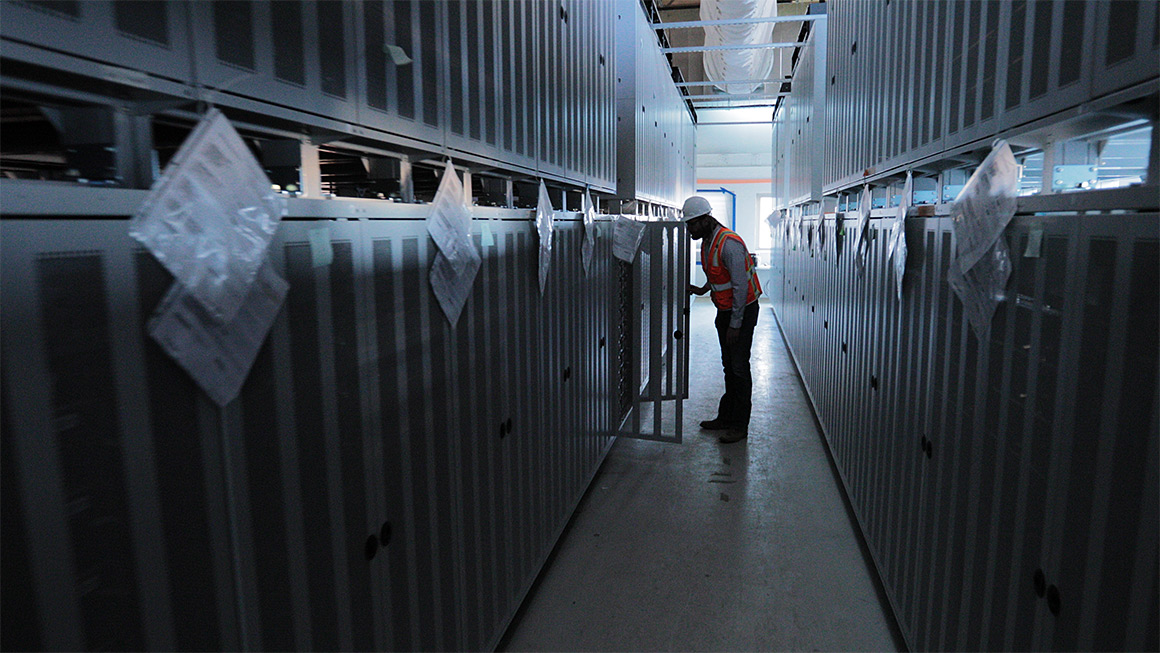 A massive U.S. battery storage project is offline in California, stoking reliability and safety questions about a technology that will be crucial to meeting future clean electricity goals.

The overheating of battery modules on Labor Day weekend affected a 300-megawatt facility at Vistra Corp.’s Moss Landing energy storage site. But the implications go beyond any one state, company or project.

That’s because energy storage offers one path to help offset the intermittency of fast-growing renewable energy capacity. A reliability problem with batteries is among the factors that could hamper the Biden administration’s efforts to decarbonize the U.S. power sector by 2035, not to mention countless midcentury state and corporate clean energy goals.

Experts caution that adjustments — from battery chemistry to management systems — may be needed to ensure large battery sites can stay online, especially as their role on the grid grows. There’s hope the industry will rise to the challenge, though changes come with costs.

“I do not think we should understate the importance of safety,” said Kelsey Hatzell, an assistant professor at the Andlinger Center for Energy and the Environment at Princeton University who studies batteries. “But I am optimistic that we can engineer for safety.”

Battery issues have occurred over the years in everything from personal devices to automobiles. For the power sector, issues may be relatively isolated. But a fire in Arizona in 2019 illustrated the need for vigilance around energy storage, and electric utility Arizona Public Service paused new battery development after that event.

Vistra said it is investigating the overheating, along with other parties. LG Energy Solution has been involved at Moss Landing as a battery manufacturer.

“A root cause analysis is underway and significant work is being done to determine exactly what happened,” Vistra spokesperson Meranda Cohn said in a statement to E&E News. “But it will take time.”

Cohn pointed to the size of the 300-MW facility and battery system, saying there are “more than 4,500 racks or cabinets that each contain 22 battery modules — that’s nearly 100,000 modules … and we will inspect every one of them.”

She also said that “at this point in our investigation, there is not an indication of fire.” Cohn said people and communities were kept safe during the event. Vistra indicated the overheating affected a “limited number” of modules the evening of Sept. 4.

“We are confident it is a matter of when, not if, the facility returns to service,” Cohn said. “However, speed is not our goal here — safety is.”

Without knowing specifics of the Moss Landing situation, Hatzell said overheating with batteries can be the result of manufacturing defects. A malfunction that results in use of a sprinkler system suggests a battery was not operating properly, she said.

“That is a last resort that you have sprinklers, you know, rain on your batteries,” Hatzell said.

The series of events marked a turnaround from last month. That’s when Vistra trumpeted the storage expansion at Moss Landing, with Vistra CEO Curt Morgan saying the site helps fill a “reliability gap” by storing excess daytime power and sending it to the grid when needed. Vistra said the facility’s total capacity of 400 MW/1,600 megawatt-hours made it “the largest of its kind in the world.” The company has said there’s the potential to further expand Moss Landing’s storage capacity, as well.

Matthew Keyser, a senior engineer at the National Renewable Energy Laboratory, said grid storage is going through an evolution as more and more energy is being put into a smaller space with batteries.

He likened it to the Goldilocks fairy tale with different temperatures of porridge, as battery lives can fluctuate based on conditions including heat and voltage.

According to Keyser, there are maybe one in 10 million defects among lithium-ion batteries — and that ratio should improve over time. But he said defects can have an impact with millions of batteries produced daily.

Hatzell said battery chemistry for energy storage is being reimagined right now — or at least reexamined.

“Looking at materials that are more thermally stable is definitely a direction that needs to be … propelled forward for these particular applications where you have thousands and thousands of batteries,” she said. “We just know that they heat up.”

California has seen some tight grid conditions in recent years amid heat and wildfires, and it has sought to push ahead with more energy storage (Energywire, Sept. 9). So the overheating at Moss Landing didn’t go unnoticed.

Anne Gonzales, a spokesperson for the California Independent System Operator, said via email that “the outage caused no overall impacts to the stability of the bulk electric system.”

“While we don’t comment on the performance of specific generators in our system, losing any source of energy at a critical time of the year can be challenging,” Gonzales said. “One of any number of resources could make up for the reductions, depending on energy bids coming into the market at the time.”

Terrie Prosper, a spokesperson for the California Public Utilities Commission, said in a statement that the regulator is “looking into the incident.”

“The safety systems in place for the Moss Landing project worked as designed to notify operators of overheating,” Burwen said. “Grid operators, including California’s, expect to rely on increasing levels of energy storage to meet decarbonization and reliability goals and we don’t see that changing because of what happened with the Moss Landing project.”

At the same time, defects or issues found at Moss Landing could ripple through other projects.

In Keyser’s view, energy storage has an important role with renewables and the evolving grid.

“That’s the best way to get … renewables on the grid — so photovoltaics and wind or hydro or whatever it may be,” he said.

Arizona Public Service, working with experts, has sought to make improvements after the 2019 fire that temporarily halted its battery expansion plans. It touted an agreement in late 2020 with Invenergy LLC related to “solar after sunset” storage projects. And APS has kept battery storage in mind as it issued requests for proposals on electricity while taking a revised approach to the technology.

“APS’s new safety requirements are designed to allow our battery energy systems to fail safely include several safety feature improvements,” the company said in a statement, adding that it “also requires large-scale fire testing and modeling which provides critical information into the design of the safety systems noted.”

In addition, APS said it’s working on improved emergency response plans and to give Arizona first response agencies “robust orientation to the storage systems as well as recurring training for various response scenarios.” Some first responders were injured by the 2019 event in Arizona.

Joel Mendoza, fire chief of the North County Fire District of Monterey County, Calif., said via email that fire personnel’s practice and familiarity with the building and fire systems at Moss Landing paid off during the recent emergency there.

He also said that “detection and suppression systems were effective in cooling the batteries and kept batteries from igniting and going into thermal runaway.”

“It can serve as an alternative to more expensive, traditional wires solutions, resulting in lower costs for our customers,” he said.

With a major Moss Landing battery section disconnected, Vistra’s Cohn said the company expects “not only to repair the facility and bring it back into operation but also to improve it so this does not reoccur.”

“It’s important to remember, like any new technology, there will be issues and learnings — no different from what the industry experienced with gas turbine technologies which are now mature, reliable, and safe technologies,” she said. “We expect to continue to invest in battery energy storage and believe that the technology is legitimate, that it is integral to decarbonizing the electric system, and that it will continue to improve.”