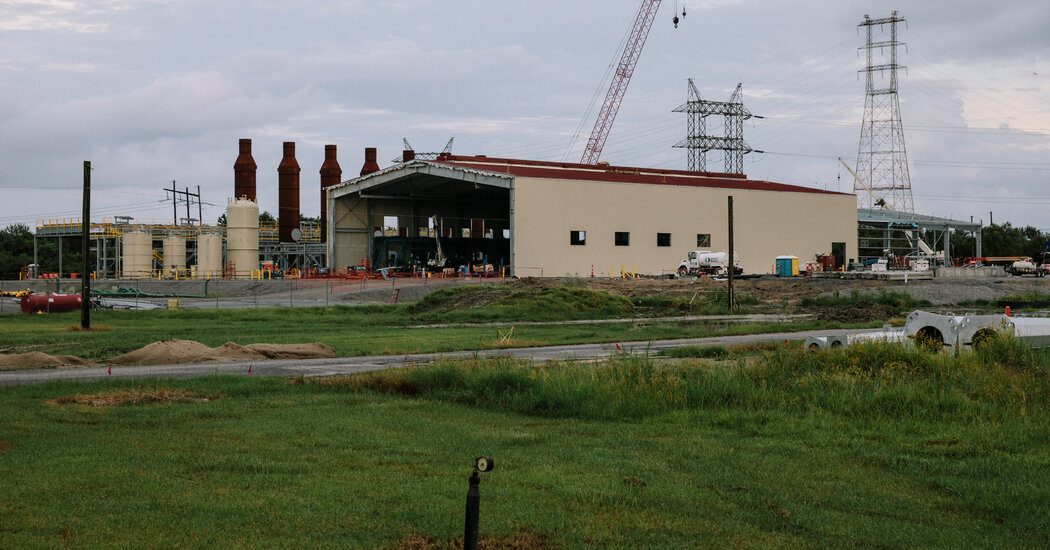 NEW ORLEANS — Linda Williams is used to power outages in her neighborhood, where strong winds often damage the electrical lines that crisscross her street. But Hurricane Ida was different. Within days of losing power, the heat was making her so dizzy that she had to stay in bed.

Just a few miles from Ms. Williams’s house in New Orleans East sits a new, 128-megawatt gas power plant that she and tens of thousands of other New Orleans residents help fund each month when they pay their bills to Entergy, the city’s sole electric utility. The plant went online last year with a promise that it would provide quick, reliable start-up power to a city that has struggled to withstand the ever-more-powerful storms that blow in from the Gulf of Mexico.

But more than a week after the Category 4 storm toppled transmission lines and severed the city’s connection to the outside power grid, Ms. Williams and many others in New Orleans were still sitting in dark, humid homes, with the last major parts of the city brought back online only on Wednesday. As many as 10 deaths may have been caused by the heat in the midst of the extended power outage, the coroner said, after the city’s new power plant did not achieve the “black start” that Entergy had promised — a quick delivery of power in the middle of a blackout.

“Let’s say you’re sold a delivery van and the selling point is when it runs out of power, you can still turn it on to drive it because of a black start feature,” said Helena Moreno, the president of the City Council. “So then one day you’re in that situation, there’s no power to your van, and even though it has black start the van won’t start,” she said. “Is that what you were sold?”

Of all American cities, New Orleans is one of the most vulnerable to climate change. In addition to rising sea levels and more powerful storms, the growing threat comes from the sheer number of days with dangerously hot temperatures — projected to reach 115 a year in Louisiana by 2050, more than triple the current number.

The power plant, built in a predominantly Black and Vietnamese area of the city already populated with junkyards, truck stops and a NASA facility, was sold as a down payment on energy resilience — a guarantee that, even if storms cut off connections to the rest of the electrical grid, the city would be able to swiftly fire up its own power plant and send electricity to hospitals, nursing homes and at least some of the neighborhoods sweltering through the aftermath of a powerful summer storm.

It was a grand gamble: a $210 million commitment to fossil fuel technology in a city that had already become a national symbol of the perils of climate change.

From the beginning, Entergy officials cautioned that the new plant would be able to power only a small portion of the city, even in the best of circumstances. But why it took so long to ramp up and how an entire U.S. city could have remained without power for so long is now the subject of extensive finger-pointing and blame, with the city pledging a full investigation that could take months.

Entergy officials said the utility was facing major damage to large parts of its transmission and distribution network that made it difficult to fully restore power to the city even after the new gas-fired plant was finally started up on Sept. 1, more than two days after the storm hit.

“Was it a panacea? No, nothing is,” said Charles Long, the acting vice president for transmission at the company. “But it definitely made a huge positive difference.”

A band of residents and national environmental groups had argued that it was more urgent than ever for the city to diversify its energy approaches, including investing in bulk battery storage and solar energy, hardening transmission infrastructure and minimizing overall demand.

“We, the citizens and the ratepayers that were against the plant, were correct,” said Dawn Hebert, the president of the East New Orleans Neighborhood Advisory Commission. In exchange for accepting another industrial plant in their neighborhood, she said, New Orleans East residents had been promised they would have more reliable power. Instead, when Ida hit, “New Orleans East was not powered up.”

Entergy had an uphill climb to sell the city on its plans from the time it first proposed the current version of the plant in 2017.

That the City Council had the sole authority to approve the plant was unusual: An internal city watchdog found in 2015 that New Orleans was the only city in the United States charged with regulating an investor-owned energy utility in a state where there was already a state agency — the Louisiana Public Service Commission — that could do so.

The arrangement has afforded New Orleans a large measure of local control, but has also allowed Entergy to avoid direct oversight by energy regulation experts.

Many residents of New Orleans East were against the plant, warning that the location would make it vulnerable to flooding. But the City Council also heard positive testimony, in part because a firm hired by Entergy paid actors $60 apiece to go to Council meetings and pretend to support the development, an illegal tactic that led to a $5 million fine.

“They were operating in salesman mode,” said Karl Rábago, who previously served on the Public Utility Commission of Texas. “They were trying to sell this power plant on the basis of one feature but they were less than complete in explaining the vulnerabilities and the limitations of their claims.”

Entergy argued that the plant would serve as a “peaking” facility to operate during periods of high demand. And with its black start capability, it would also be able to repower parts of the city all on its own after a blackout, even if New Orleans was cut off from its usual sources of electricity.

But when each of the eight transmission lines that ship power into the city took heavy damage during Ida, there was no black start. The city sat dark for more than 50 hours, and even once small pockets of power began to return, it was because one of those transmission lines had been repaired.

Why the black start did not occur is one of the questions to be answered during the upcoming investigation. Ms. Moreno, the City Council president, said the Council would be trying to learn “whether the previous Council was oversold on what this plant could or could not do.”

Environmentalists and other advocates who were calling for greater reliance on locally generated renewable energy had been skeptical of Entergy’s promises from the beginning.

Logan Atkinson Burke, the executive director of the Alliance for Affordable Energy, a consumer utility nonprofit, warned prophetically at one City Council meeting in February 2018 that a storm intense enough to bring down all of the transmission lines “would have such a catastrophic impact” on the fragile electric lines inside the city that the plant “would be of very little help.”

Entergy has come under fire for years for failing to adequately maintain its distribution network. In 2019, the City Council fined the company $1 million after finding that it had failed to properly maintain electricity poles and wires following a series of power failures between 2014 and 2017. The company reduced its investment in the distribution system by $1 million in 2014, which was followed by an increase in the length and frequency of outages.

Deanna Rodriguez, the chief executive of Entergy’s New Orleans operation, said the company had not misled the city about the new gas plant’s capabilities.

The plant, once it started, provided power to parts of the city that would otherwise have stayed dark for much longer, she said.

“There’s a lot of misinformation out there that led people — not us — to believe that it would somehow power the whole city,” Ms. Rodriguez said. “The plant worked. It was the right technology at the time it was selected, it performed brilliantly during the storm.”

Entergy officials said the company could have tried a black start after Ida but decided against it after learning that one of the damaged transmission lines — from Slidell, just northeast of New Orleans — could be repaired in about the same amount of time it would take to create an “island” grid in the city that could accommodate power from the new plant without a damaging load imbalance.

They said the black start capability is more likely to be useful in a circumstance where a storm passes near New Orleans — cutting off power coming into the city from elsewhere — but does not demolish distribution lines inside the city the way Ida did.

“We could have done it, we were prepared to do it,” Mr. Long, the Entergy vice president, said. “It just wasn’t the best choice.”

Entergy officials have continued to insist that relying on locally generated renewable power to tide the city through a hurricane remains a pipe dream.

While about 38 percent of the electricity provided by Entergy to New Orleans comes from non-fossil-fuel sources — mostly nuclear — the solar energy produced within the city has the capacity to produce, at best, about 5 percent of the city’s peak energy demand, energy experts said.

“If you want to design a system that can withstand a Category 5 hurricane, and every person have their lights back the next day — with today’s technology, it’s just unaffordable,” Mr. Long said.

Some experts say that over time, investing in renewable energy pays off. And Entergy’s argument does not sit well with many residents, including Ms. Williams, who say there is no more time to wait. She and about 200,000 other customers have been paying higher power bills every month to fund the new power station. Sitting this week in her living room, where it had taken eight days for the power to come back on, she felt she did not get what she paid for.

“It doesn’t matter if the plant is there or not,” she said. “We still have problems.”