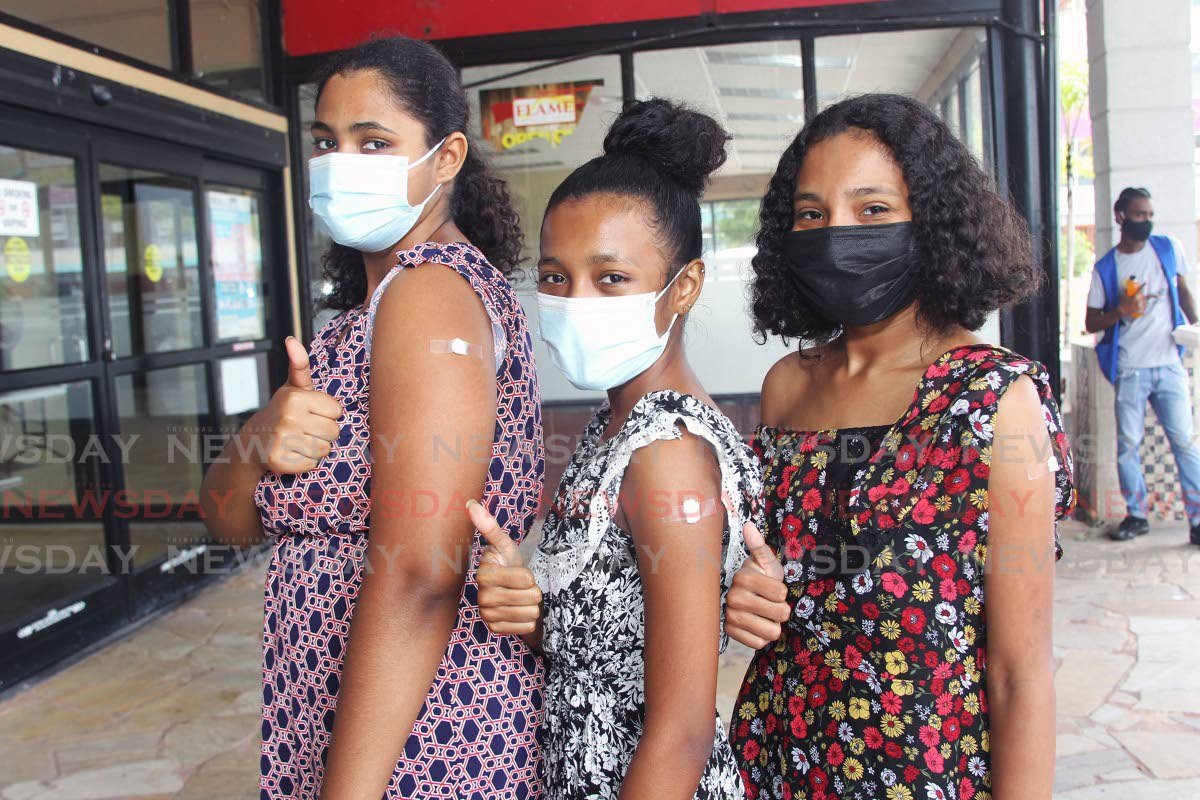 Parents and students have had to make a lot of adjustments and sacrifices over the past 18 months of online schooling to ensure their mental and physical health as well as their educational success.

“First, I needed to make sure the children had all they needed for school. So while they would have had laptops and books, the three of them were now competing for space all day to be able to do their work.

“Before, when they had homework they would come out into the study area and go back into their rooms and someone else comes out. But I had to provide infrastructure so everyone ended up with a desk and chair in their room so everyone had their own work space.”

She said with online school their sleep cycle changed drastically and they would overeat, as they were at home all day.

She added that in the beginning they would wake up, have breakfast and get ready for school. But many teachers doubled up on the work they gave their students, since the children were at home all the time. That left the children feeling tired and overloaded with schoolwork.

She told Sunday Newsday her eldest daughter always got good grades but is also quiet and reserved. Now that she is at home, she hardly interacts with friends and has instead channelled all her energy into her schoolwork.

Online schooling was a positive step for her son, however. She said QRC was very efficient and structured and, as he used to be easily distracted at school, having to work at home left him able to focus and get his work done.

His only issue was that his teachers were not as accessible as they were in physical school, so if he had a problem, he could not go to them outside of class time.

On the other hand, she said St Francois was very disorganised, with almost no classes in the first school term, from September 2020.

“At the time, she was in form four so she did exams this year. They lost a lot of time and even when they came onto a platform, some of the teachers were still not teaching.”

Then, being an extrovert, her younger daughter was not dealing well with being isolated. She missed interacting with her friends, and could not go anywhere which led her to depression.

“For her, the sudden change was mentally challenging. Two weeks turned into a year and a half and everything was in one space. There was no sport, no outdoor exercise, her sleep pattern changed. Her anxiety level increased, concerned that I would get covid when I left the house to go to work. And after exams I realised her hair started dropping from the stress.”

Caesar also had concerns about their physical activity, as her two youngest were athletes: her son plays water polo and her daughter runs track and field. As they could not train, she signed them all up for online sessions at the gym they previously attended. They woke up early every morning and exercised together for an hour before school. They would also exercise around the Queen’s Park Savannah together but had to stop during the state of emergency and only recently restarted.

She also started doing Bible studies with them on evenings, had a movie night and a game board night scheduled, and when all their exams finished she took them to Tobago for some relaxation.

“I had to start doing things to pull them away from their individual devices and bring us together as a family.”

Another mother, Maresha De Souza, said online school was more challenging for her than her son, Liam Arieatas, 12, who sat his Secondary Entrance Assessment (SEA) exam this year.

She explained that some children in his class had problems with their internet so classes had to be cut short, since the teachers could not continue and leave the other children behind. That meant the next day the teachers and students had to do a lot more work in a short period and she too had to revise so she could help with schoolwork.

All this while she too had to work from home and balance her time to give attention to it all.

She said online school did not hamper her son’s learning, as he had her support, everything he needed to function, and his teachers were there to guide him. He was also able to keep up with his work and even improve in some areas.

“I think at one point the online participation was getting to be a bit exhausting, because he was just sitting there in front of the computer all the time. He didn’t have that physical activity – to get up, go outside, take his break and come back. But it wasn’t unmanageable.”

She got an ergonomic chair so he would be comfortable, and restricted his screen time after classes. She also noticed he was going to bed later, as he did not have to get up early to leave the house to go to physical school.

She said he used to play football after school but that stopped with online school. He often seemed sluggish or lethargic, but she encouraged him to go outside and play with or walk the dog on evenings for some physical activity, and persuaded him to exercise when she did.

De Souza expressed concern about his social development, however. She said Arieatas was never very outgoing, but he had a few friends. whom he missed even though they would call each other and talk. She therefore put him in online lessons and a camp where he was exposed to children from different schools.

“I really don’t know how it will affect him but hopefully being exposed to other people during this period via the lessons and camp will make it a little easier for him for when he goes back out to school.”

Arieatas agreed with his mother’s assessment, saying that seeing friends through the screen was not the same. He added that at school he used to play with his friends and get exercise, but at times, being at home was too comfortable and he feels “lazy.”

He missed physical school because there teachers were able to give students more personal attention when they did not understand a point or got something wrong. Online school also had fewer teaching hours and he felt he was more easily distracted at home.

“It’s not all that bad, because I’m in the comfort of my home, but I find if you go back to physical school it will be the better source of learning. And even though I passed for QRC, I believe if I had gone to physical school, my marks probably would have been better.”

There may be some truth to Arieatas’ statement as, on Thursday, the Education Minister, Dr Nyan Gadsby-Dolly, said there was a drop in performance in the SEA examinations between 2020 and 2021.

At the SEA 2021 recognition ceremony at the ministry on St Vincent Street, Port of Spain, Gadsby-Dolly said compared to 2020, 1.4 per cent more students scored over 90 per cent, but 6.7 per cent more scored under 30 per cent overall. Student performance in maths decreased by six per cent, English language arts by 4.1 per cent, and writing by 0.8 per cent.

She commented, “Though further analysis will be done into the distribution of scores and the performance of students, as is customary, the effect of student absence from the physical classroom over the past 18 months cannot be ignored as a contributing factor to a decline in performance, notwithstanding the mitigation efforts of parents, teachers, administrators, corporate TT and the Ministry of Education.”

She said she learned better in physical school, as she would associate what the teacher wrote on the board or something that happened in class with a particular lesson and it would help her recall the work. But with online classes, everything felt the same and schoolwork felt “like a task.”

She added that, with online school, less work was being covered compared to physical classes, and there was less revision during classes, so it was easier for her to forget lessons. That, in turn meant more time studying after class.

“After online classes I feel even more tired than I did with face-to-face classes, even though I’m getting a bit more sleep, since I don’t have to wake up as early for physical school. Also, before I would be more inclined to go outside and play with my sisters, but now it feels better to just stay inside and lie down.”

She said her eyesight has got worse, so that she now needs glasses, and sometimes her neck hurts after long periods of either looking up at her screen and looking down to take notes.

Also: “It’s lonely. I want to see my friends and talk to them, because normally during lunch we would talk about what happened in class or study together. But now we have to study on our own, and talking online is not the same.

She said she got vaccinated and would gladly go back to physical school as soon as it was possible, but she had yet to hear anything from her school.

Physical classes are likely to resume in October for students in forms four to six once they are vaccinated.