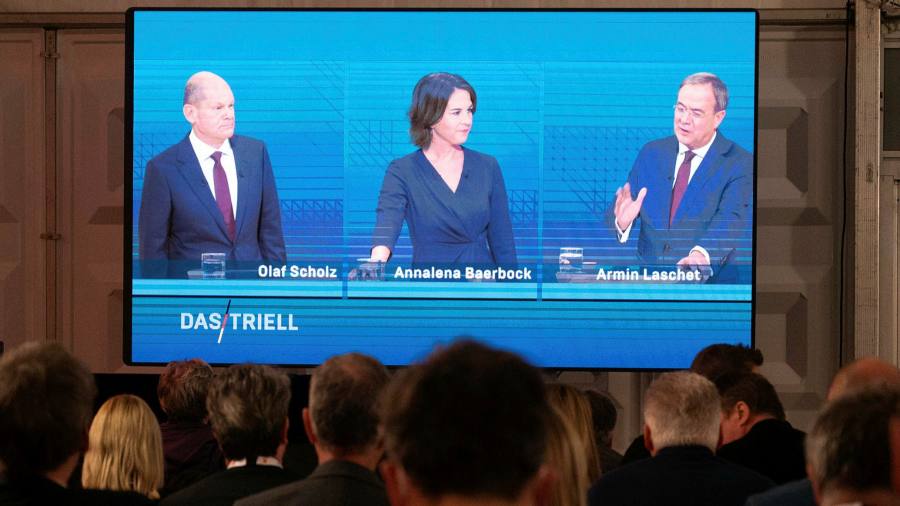 Sign up to myFT Daily Digest to be the first to know about German politics news.

Olaf Scholz, frontrunner in the German election campaign, came under fierce attack in the second televised candidates’ debate over last week’s raids at the finance ministry in Berlin, with his conservative rival Armin Laschet accusing him of a gross failure of financial oversight.

“It’s a miracle how even in this case, with public prosecutors coming to your ministry and carrying out searches there, you can just try to gloss over the whole thing,” said Laschet, candidate for the centre-right CDU/CSU.

The often ill-tempered, 90-minute discussion between Laschet, Scholz, of the left-of-centre Social Democrats, and Annalena Baerbock of the Greens was held just two weeks before an election that will decide who succeeds Angela Merkel as German chancellor.

The debate, shown on Germany’s two main public broadcasters ARD and ZDF on Sunday evening, came at a make-or-break moment for Laschet, who has come under enormous pressure to stop his party’s relentless slide in the polls and halt the steady rise of Scholz, Germany’s finance minister and deputy chancellor.

A poll of polls on Sunday put Scholz’s Social Democrats on 26 per cent while the CDU/CSU trails on 21 per cent. The Greens are on 16 per cent and the pro-business Free Democrats on 12 per cent.

But early indications are that Laschet’s pugnacious performance may not have been enough to tilt the balance and arrest the conservatives’ decline. According to a snap poll carried out by ZDF, 32 per cent considered Scholz had performed best in the debate, 26 per cent plumped for Baerbock and only 20 per cent for Laschet.

German prosecutors raided the finance and justice ministries last week as part of an investigation into alleged obstruction of justice by the Financial Intelligence Unit, Germany’s main anti-money laundering agency.

Scholz said the probe had nothing to do with his ministry, and that they were simply seeking information to help with their inquiries. He said that, on his watch, the FIU had been reformed and its capacities substantially increased.

But Laschet said that, since Scholz oversaw the FIU, he bore ultimate responsibility for problems at the agency. “You have oversight over money-laundering,” he said. He added that it was “inappropriate” for Scholz to have criticised last week’s raids, saying “that’s what populists in other countries do”.

Laschet also attacked the finance minister over the fraud at digital payments company Wirecard, which Germany’s financial regulator BaFin had failed to detect.

“The result of your actions is that financial supervision failed,” he said. “If my finance minister did the kind of job you’ve done, we’d have a serious problem.” 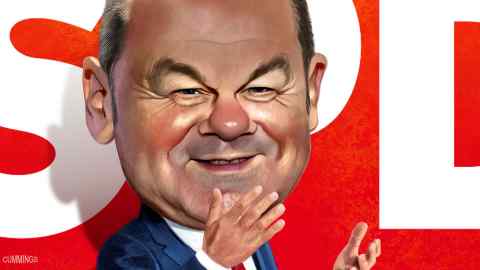 In often testy exchanges, Scholz accused Laschet of “dishonesty”, saying he had “deliberately created the false impression” that the investigation being conducted by prosecutors was into his finance ministry, rather than into the FIU.

He also insisted he had drawn the correct conclusions from the Wirecard affair, beefing up Germany’s system of financial oversight, forcing companies to change their auditors more frequently and separating auditing from consulting services.

The three candidates were quizzed about their stance on mandatory vaccinations and on whether employees should be forced to undergo regular tests for coronavirus.

They were also asked what the main lessons were from the pandemic. Laschet said Europe must be able to produce its own masks and other PPE without having to rely on imports from other parts of the world; Baerbock called for a “crisis committee” in the chancellery to handle public health emergencies; and Scholz called for an improved national health service.

All three agreed that Germany needed to achieve carbon neutrality by at least 2045, though they differed on how to achieve it. Baerbock went further by insisting that Germany stop generating power from coal much sooner than the 2038 deadline agreed by the Merkel government, and phase out petrol and diesel cars.

Though they often differed, clear points of convergence emerged between Scholz and Baerbock. Both want to raise the minimum wage, end a two-tier system of health insurance, guarantee stable pensions and introduce a tax on wealth.

Laschet cited a “fundamental difference” between him and the others — he was strongly opposed to tax increases. He said the past few years had shown that “even when we don’t raise taxes the state takes in more revenue”.