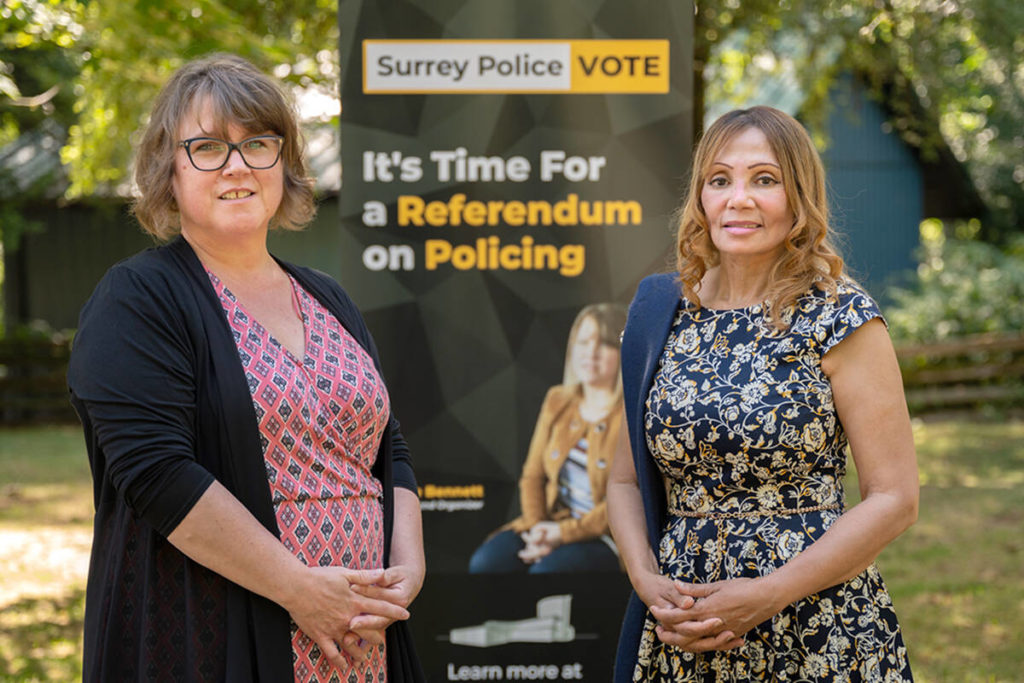 City of Surrey bylaw officers issued a violation ticket to a Surrey Police Vote canvasser Saturday (Sept. 11) for “advertising,” says a spokesperson for the group.

Bill Tieleman said a canvasser for the group, which is a citizen-based Initiative campaign asking the Province of B.C. to hold a binding referendum on the proposed police transition, was at Dogwood Park in South Surrey when a bylaw officer issued them a ticket.

He said the ticket was for “advertising.”

According to the bylaws, “No person shall deliver, distribute, post, paint or affix any advertisement, promotional material, poster, bill or advertising within a park without the prior written permission of the General Manager.”

“This is an Elections BC-authorized initiative petition drive. It’s not like we’re out advertising a car dealership or Coca-Cola or something. This is about democracy,” he noted.

“I would have thought advertising would be something like a commercial product, as opposed to an exercise in democracy.”

The city’s bylaw department said in an emailed statement: “Officers issued a fine today to a canvasser in Dogwood Park for violating a Surrey bylaw and policy that precludes unpermitted advertising, and specifically precludes any form of political advertising in City parks, recreation and cultural facilities.”

Darlene Bennett, organizer of the petition drive, said this is “a clear and blatant ongoing attempt to silence the people of Surrey and impede a democratic process.”

Surrey Police Vote has already filed an intimidation complaint with Elections BC against Mayor Doug McCallum. It alleges “possible intimidation and interference” with its volunteers.

Bennett has asked Elections BC to launch an investigation, alleging the mayor attempted to intimidate and interfere with authorized volunteers outside a South Surrey grocery store on Saturday, “threatening to have them evicted by Surrey bylaw enforcement officers.”

This follows Mayor Doug McCallum claiming he was “run over by a vehicle” during an altercation with the Keep the RCMP in Surrey on Sept. 4.

Campaign members were collecting signatures at the South Point Save-On-Foods on Sept. 4 when McCallum arrived, which was then followed by a verbal altercation, said KTRIS founder Ivan Scott.

“He was next to the car, she moved the car off. He was standing there… What happened, is that he alleges, and I think it’s absolute rubbish on his part, he alleges that she rode over his foot,” Scott said.

Police were later called to the scene, however, an ambulance was not, Scott added.

As for bylaws being called on Sept. 11, Tieleman said the group wonders who called them.

“This is exactly the question that we want to know. We don’t know who’s directing city staff on this,” he said.

“It’s not like it’s a secret. We put out on Twitter, and we sent to our supporters … somebody decided, somebody sent the bylaw officers to the park to issue a ticket. And we’d like to know what the chain of command is on that.”

Coun. Brenda Locke, who was at Dogwood Park with the canvassers when the ticket was issued, said “obviously, it has been directed.”

“This was deliberate, there was no doubt about it.”

She pointed to Scott’s comments last week that the mayor threatened to have bylaw officers remover the campaigners from Save-On-Foods.

“Somebody is directing the senior management staff to do this.”