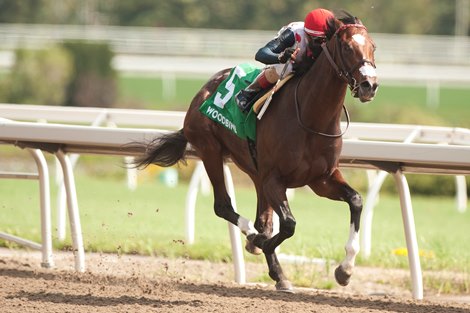 Under Rafael Hernandez, the 4-year-old Tapit   ridgling, trained by Mark Casse, burst out of the gate and immediately seized control of the 1 1/16-mile main track race for 3-year-olds and up.

Mighty Heart , Canada’s reigning Horse of the Year, was rated in second by Daisuke Fukumoto, as Tap It to Win led through early splits of :25.70 and :49.05.

As the field rounded the turn for home, Mighty Heart was called upon for his best as Tap It to Win, the 9-2 third choice, was still running comfortably and confidently through three-quarters in 1:12.96.

Mighty Heart was second throughout and finished a half-length ahead of Special Forces . Dolder Grand  and Another Mystery  completed the order of finish.

Hernandez, who followed the pre-race instructions to perfection, felt confident at every step of the Seagram Cup.

“They told me, ‘Raffi, just get to the lead. Do your thing there. Put him on the lead and the rest is up to the horse,'” Hernandez said. “When I looked back turning for home, I said, ‘If they have something, they have to run faster than me because I still have plenty.'”

The Seagram Cup was the first graded stakes triumph for Tap It to Win, who made his first start on the Toronto oval’s Tapeta, having previously raced on its turf course. He won his first stakes in March when taking the NYRABETS Sprint Stakes at Tampa Bay Downs, and last year at 3 placed in the H. Allen Jerkens Stakes Presented by Runhappy (G1) at Saratoga Race Course and the Pat Day Mile Stakes Presented by LG&E and KU (G2) at Churchill Downs.

Bred in Florida, Tap It to Win is out of the stakes-winning Medaglia d’Oro   mare Onepointhreekarats , who died last year. The dam of three foals, two to race, the mare also produced Souper Stonehenge  (Speightstown  ), winner of this year’s Jacques Cartier (G3) and Vigil Stakes (G3), and an unraced 2-year-old full brother to Tap It to Win named Tapthespeedofsound.