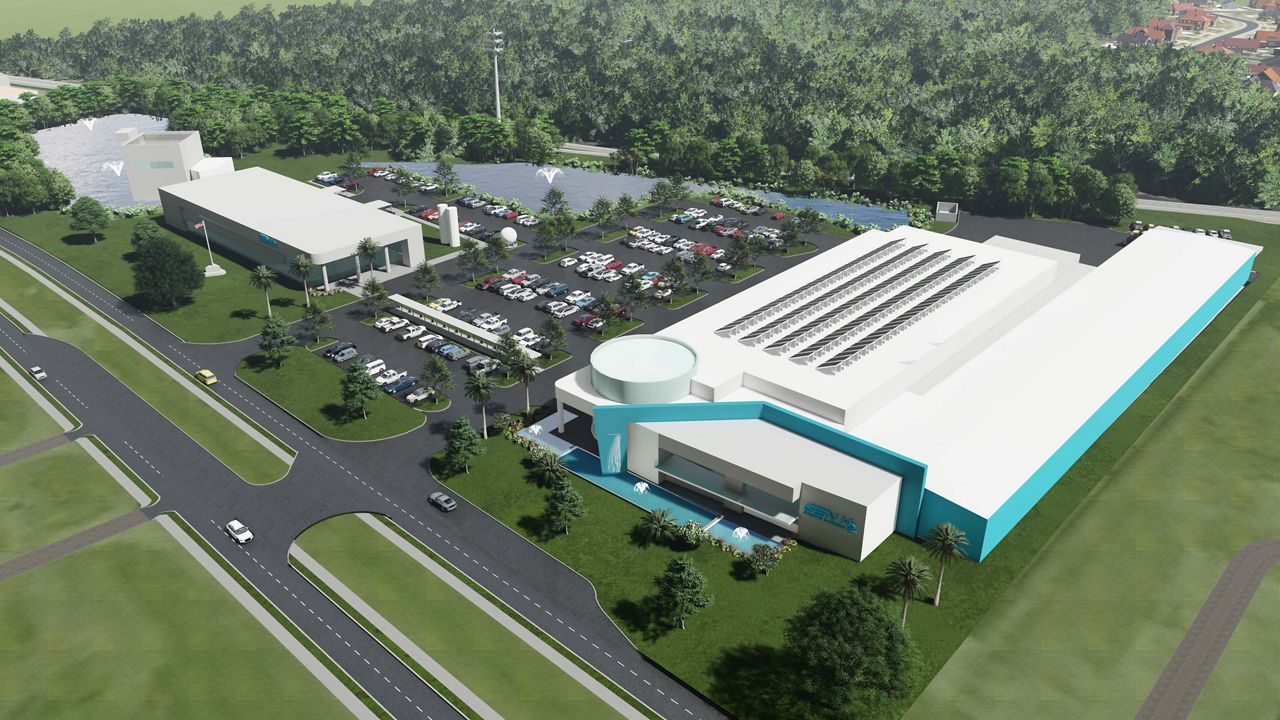 TITUSVILLE, Fla. — Liquid hydrogen has long been a pillar of the space industry as it plays an important role in rocket propulsion. But as the hydrogen market diversifies, the number of companies that manufacture liquid hydrogen is also growing.

The city of Titusville in Brevard County will be the latest beneficiary of this budding pocket of the economy.

What You Need To Know

On Friday, GenH2 closed on a deal to transform an old car dealership property into its new global headquarters. The company acquired the old Eckler’s Corvette property, which has been dormant since 2014.

“Since we actually grew up and came from the hydrogen economy here at NASA at Kennedy Space Center, we thought it was only appropriate that we did something closer to home,” said GenH2 CEO and founder Cody Bateman. “Plus, a lot of our engineers already live here.”

Bateman, like many of his colleagues at GenH2, formerly worked for NASA before branching off into new endeavors.

He, along with Ted Soliday, a product and program manager with the company, gave Spectrum News 13 an exclusive tour of the future headquarters site Monday.

It will undergo a nearly $35 million revamping to fit the needs of the company as it looks to rapidly grow in northern Brevard County.

Phase 1 will cost about $4 million and will involve restoration and construction work on the main building, demolishing an old warehouse and updating some of the cosmetic features of a third building on the property.

The main building will feature an open, glass exterior and a space on the bottom floor that will be open to the public to see some of the actual work being done by GenH2. Bateman said the goal is to help educate the public about hydrogen energy.

“We’ll be able to bring people here, have educational scenarios where we will take them through and show them step by step and line them up so that they can learn more about hydrogen and especially the safety of the hydrogen,” Bateman said.

There will also be space in the upper levels of the facility where GenH2 can conduct proprietary research on the hydrogen production units, spearheaded by Chief Technology Officer Dr. Ali Raissi, a former research faculty member at the University of Central Florida (UCF) Energy Research Center.

“(He’s) coming in and designing our hydrogen production solutions. We won’t actually be producing hydrogen here in this building, but this is where all the initial lab work and research is done, back here in the back,” Bateman said.

Liquid hydrogen has a long legacy within the space industry, from helping to launch each of the Space Shuttles to still powering the RL10 engines manufactured by Aerojet Rockedyne, which are used in both United Launch Alliance’s Atlas V and Delta IV rockets.

But fuel cell electric vehicles (FCEVs) are also gradually gaining a foothold in the automobile market. According to data compiled by the California Fuel Cell Partnership, 11,187 fuel cell cars have been sold and leased in the U.S. There are also 48 fuel cell buses currently in operation in the Golden State.

Part of the slow rollout of these zero-emission vehicles is the lack of hydrogen fueling stations. In California, there are only 48 stations in operation. The goal of GenH2 is to greatly expand that number and be able to place smaller and more efficient hydrogen stations across the country.

“The goal is to have 2,000 stations — that’s just in California,” Bateman said. “We’re expecting to see that expand to 15 additional states in the next five to 10 years.”

He noted that the Biden administration and others working in the field of hydrogen have goals to expand the marketplace by 2030 and 2050.

“Well, 2030’s going to come here very, very quickly because it takes time and effort for us to build this, the infrastructure that we’re designing right now,” Bateman said.

As of now, several car companies are producing hydrogen fuel cell vehicles, including Toyota (Minari), Hyundai (NEXO), Audi (H-Tron Quattro) and Mercedes-Benz (GLC F-Cell). California currently offers a $4,500 rebate for those who own and register an FCEV in the state for 30 months.

But Bateman is looking beyond just the needs of the automobile industry when it comes to using hydrogen power.

“The whole hydrogen economy is working, not only for cars, we’re actually seeing more of a long-term future for semi-trucks, light rail trains, shipping and such like that,” he said. “We’re also working with a team in Korea for hydrogen-powered drones.”

Securing the headquarters of GenH2 was done through a collaborative partnership between Rocket City Commercial brokered by eXp Commercial and the North Brevard Economic Development Zone.

They were able to offer an incentive package to GenH2 that enticed them away from other prospects, like Arizona and Texas.

“We are so excited to have been a part of this innovative company coming to Titusville and we look forward to watching them launch from here!” said Holly Carver and Lisa Earnhardt in a joint statement. They are a broker associate and sales/leasing associate respectively with Rocket City Commercial. “We know it means well-paying jobs for our neighbors and an infusion of new economic activity for our community!”

Bateman said Phase 1 of the project would bring with it about 100 jobs. Using the open environment on the ground floor of the main building, they hope to attract tourists to come learn about the hydrogen economy.

There are also plans to partner down the road with entities like Kennedy Space Center Visitor Complex and Brevard County Schools.

“It’s going to be great to bring in the elementary kids, the high school students and actually offer them internships,” Bateman said. “Titusville High School actually has a new shop program that they’re bringing online. We can take those young students and actually put them into a practical situation within GenH2 where they can actually implement the things they’ve learned in school.”

He said they’re aiming to offer those internships by fall 2022.

Bateman said they will also have a training center on the HQ campus where they can bring in Fortune 50 companies from the oil and gas industry and assist them as they transition to hydrogen.

They also want to carry the green initiative into the configuration of the building and parking lot as well.

“We’ll be putting solar cells on top of the buildings going forward, once again, making it LEED certified,” Bateman said. “We’ll be replacing the diesel generator with hydrogen generation electrical system in the future.”

Phase 1 of the project is expected to be completed in early 2022.