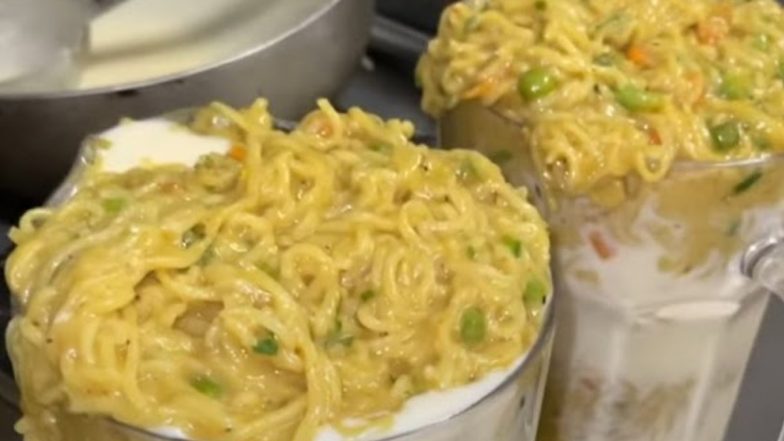 Maggi in a milkshake? Sounds more bizarre than the picture itself. An image of the maggi milkshake goes viral on social media after netizens claimed it to be a disgusting combination. The image includes two glasses of milkshake, topped with maggi and one can wonder how eerie it’d look. While improvisation with the instant noodles is common, mixing it with anything and everything and turning it into the worst abomination has left the social media users aghast. In no time, the viral maggi milkshake photo sparked funny memes and jokes on Twitter.

Is This a Joke?

Dont trade if you are having this : Maggi Milkshake.

Looking for person who made this! pic.twitter.com/bsAc92vNMp

Something Missing in the Milkshake? Yes, Cheese!

A Killer in Real Life!

Reading comments, I found this is maggi milkshake! This pic has single handedly spoilt maggi as well as milk shake for me. https://t.co/4Roeg4tqvD pic.twitter.com/CRjS9z9CTx

She – i love maggie

Me – i love milkshake

You Want to Try? What?

Who the hell invented maggie milkshake?

I dont see myself capable enough to try it😂

(SocialLY brings you all the latest breaking news, viral trends and information from social media world, including Twitter, Instagram and Youtube. The above post is embeded directly from the user’s social media account and LatestLY Staff may not have modified or edited the content body. The views and facts appearing in the social media post do not reflect the opinions of LatestLY, also LatestLY does not assume any responsibility or liability for the same.)