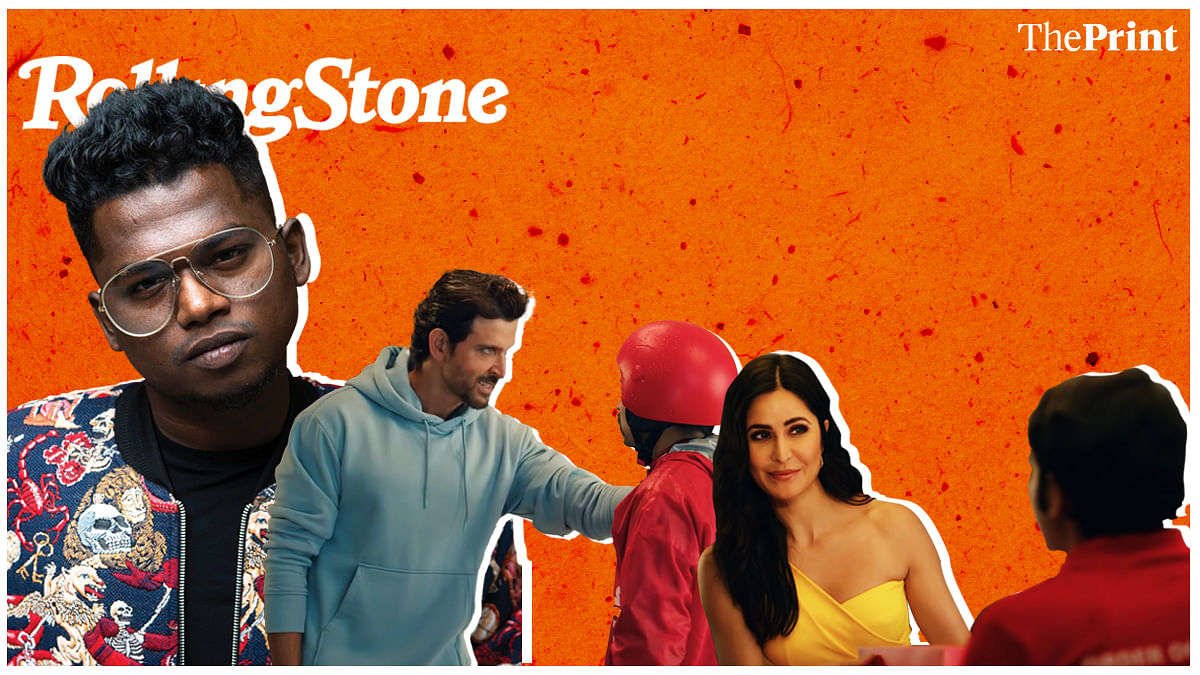 
About a week after Rolling Stone India received backlash for excluding Dalit artist Arivu from the cover of their latest issue, they released a digital cover with only his face, saluting him for “raising his voice against systemic injustices”. While many hailed it as long overdue, not everyone bought the move. One biting comment on Instagram read: “‘Everyone’s calling us casteist, what do we do?’ asks the editor, ‘Let’s put him in a digital cover and seal the deal’, says a junior intern.”

After months of scrutiny over Zomato’s labour terms and conditions with its delivery partners, the food-tech giant attempted to fix the image problem with a series of ads. The first, starring comedian Danish Sait, was cancelled for likening his job to the average delivery worker’s. Zomato’s next ads, with Katrina Kaif and Hrithik Roshan as customers, were also called out for portraying a taxing, possibly exploitative job as not only okay but even desirable and aspirational. In response, the company explained that the ads were “well-intentioned but unfortunately misinterpreted”, because they meant to convey that delivery partners are the heroes—in a film called “Har customer hai star”, in which said customers are played by the country’s top celebrities. Finally, they launched a series called “Humans of Zomato”, in which actual delivery workers speak about their experiences.

‘Wanderlust’ is a new collection by designer Sabyasachi Mukherjee and global retailer H&M that packages Indian styles into fast fashion for various markets. In response to criticism that the project could have uplifted the artisans behind such styles, Sabyasachi said that he and the artisans were playing in different markets, so why bring them into the picture? One of the influencers flaunting his collection, Nitibha Kaul, even used “poor people as aesthetics” for her Instagram post.

All of the above instances are from August 2021.

In July 2020, Shoppers’ Stop reportedly took down photos that cast rural women as the backdrop to a fair, elite model. In May 2020, soon after Covid-19 hit India, Kent RO Systems recanted an ad that positioned their bread-makers as the solution to a maid’s “infected hands”.

In June 2017, Piano Man Jazz Club in Delhi shared an event by a band called “Bhangijumping” on their Facebook page. Both the owner of the club and the band later apologised, with the frontman admitting that he did not know that “Bhangi” was a slur (referring to a Scheduled Caste group that is relegated to cleaning toilets, even though the profession was outlawed in 2013). The frontman said he had picked up the pun “related to bungee-jumping” from a Tantra t-shirt.

In March 2016, an ad by electronics company Havells showed a female student refusing reservations, choosing to advance “apne dum par” (“on her own merit”). Released soon after Dalit student Rohith Vemula died by suicide on his college campus, the ad caused outrage. And Havells—like most of the other companies that have followed in its footsteps—apologised for hurting the sentiments of “some viewers”.

What are all these brands missing, and why?

In India, caste and labour issues overlap. About 95 per cent of the working population is in the informal sector, of whom 93 per cent belong to oppressed castes (NCEUS, 2009). Dalits and Adivasis constitute a large portion of those below the poverty line; these groups have also been the worst affected by the pandemic, losing livelihoods and facing discrimination while trying to access basics like food and medicine.

For many belonging to traditionally disadvantaged or marginalised groups, gig work at companies like Uber, Ola, Swiggy or Zomato holds the promise of relative job security, autonomy, and equality. Still, a study found that the majority of delivery workers in India are dominant-caste Hindu males, and although caste was not a factor on the job, it was at the time of entry. Socioeconomic status also becomes a gatekeeper for access to information, tech, and other enablers needed to materialise such opportunities.

Advertisements are the visible manifestation of a broader marketing strategy, but the implicit casteism of the latter can make itself apparent even without the former. Tata Trusts pledged $200 million to doctors and nurses on the frontlines, while only creating an awareness campaign about segregating waste to help sanitation workers, 90 per cent of whom belong to the lowest Dalit sub-castes. Similarly, music platform Maajja’s response that it was “just a creative decision” to not include Arivu’s face in a Time Square advertisement about his musical creations was simply the easier, “more available” decision to make, as was Sabyasachi’s exclusion of Indian artisans from his project.

Recognising that these are all likely well-meaning actors, we are left to conclude that the majority of Indian business leaders do not know how to navigate the subject of people who do not share their privileged position in society. This is because they are likely dominant-castes themselves, bred and produced by institutions also run by dominant-castes. In these ‘urban spaces’, research corroborates what has been my experience too—caste is meant to be invisible, a “non-issue” in today’s day and age. This has led to generations of managerial workforces, including mine, who are never taught to recognise and combat the perpetuation of unfair, ingrained power structures. Caste has been reduced to questions about reservation, branding beneficiaries of affirmative action as incompetent and opportunistic. This—along with the historic oppression they have faced—has made oppressed castes feel pathologised and second-class in their existence.

As evinced by the blatant Havells ad, a privileged worldview—extremely hurtful to many others—often passes multiple rounds of approval by various managerial stakeholders across companies.

If culture is the set of meanings that a society produces, and the media’s role is to amplify those meanings, then “in the Indian context, the control over meanings to gain power has a 3,000-year history,” writes researcher Pranjali Kureel. And the historical, overwhelming majority of dominant-castes amongst the ‘creating class’ has led to the proliferation of meanings that reinforce their own power while cementing the disadvantaged position of other groups—be it via Indian comedy, films, or journalism—contributing to societal inequality and “epistemic violence”, where oppressed-castes become “mere objects of others’ gaze and never the subject taking ownership of their characters.”

When it comes to marketing and advertising, the usual justification—that all audiences share a common aspiration of being fair, urban, and upper-caste—is only so because that is how aspiration has largely been portrayed. It needn’t be that way.

How and why should brands, businesses address caste?

Caste locks people into social positions and occupations based on scriptures. But people can move across classes, all else being equal, by definition. Brands promise class, and marketing needs to create class differences that do not play upon what individuals cannot control—their historical disadvantages. As the Advertising Standards Council of India (ASCI) code’s Chapter III 1 b states: “Advertisements should not deride any race, caste, colour, creed, or nationality”.

This is admittedly challenging in India, where upward class mobility has historically been impacted by several variables—caste, gender, religion, and more. How then can marketers create class differences and aspirations that don’t build on these, or even subvert and break casteist norms?

An Idea! ad from 2008 may show how: A village is divided over caste until the sarpanch, who uses an Idea! SIM card, dictates that everyone should start identifying themselves not by their caste, but their Idea cellular number instead. What an idea, sir jee! indeed.

“Aapki chamak hi aapki pehchaan hai,” says this Rin detergent ad that shows the daughter of an autowallah starting a high-profile banking job. Gillette’s Barbershop Girls of India showed two young girls from the Banwari Tola village running a barbershop, traditionally an establishment run by men for men. An ad for quiz show Kaun Banega Crorepati showed a contestant from Kohima, Nagaland, (where over 80 per cent of the population belongs to Scheduled Tribes) asking how many accept the city as part of India, even if everyone knows it is. More recently, Bhima Jewellers’ Pure as Love campaign depicted the journey of a transwoman gaining emotional and social acceptance, winning love for its respectful, aspirational portrayal of a traditionally disadvantaged group. According to the makers, this was not easy to pull off in a category as traditional as jewellery, where celebrity tie-ups rule advertising. But Bhima wanted to use the power of their brand to “push the message that whoever one chooses to be … the brand is there to serve and empower, not judge.”

And although rapper Badshah’s viral hit Bachpan ka Pyar didn’t benefit its original creators, it was a step forward with its respectful portrayal of Sahdev Dirdo, the beloved, talented Dalit student behind the rendition that went viral. Dirdo, who belongs to Chattisgarh’s Sukma district, was on the cover of the song as well. Is Rolling Stone India listening?

Also read: Can a Dalit wear Armani and Zara? Why most Indians would still say no

Still, caste is never explicitly mentioned in Indian advertisements (except in blatantly casteist matrimonial or job ads). “The mainstream media does not acknowledge or accept the cultural and intellectual assertions of Ambedkarites,” writes Kureel, arguing that many Dalit festivals, millions of rupees spent on anti-caste literature, and several other cultural elements are simply missing from Indian public consciousness. This invisibilisation has long-term economic effects, as professor of strategy Hari Bapuji notes: “Caste affects people in that it restricts consumption. Lower castes and Dalits are not supposed to consume things, they’re not supposed to flaunt their possessions,” which affects the overall market size and India’s ambitions of becoming a trillion-dollar economy.

Marketing and advertising—which play a pivotal role in defining aspiration and shaping culture—are key to correcting this. We need to go from images of Dalits as “half-naked, malnourished”, or alien and miserable, as author and filmmaker Anurag Minus Verma writes, to portrayals of them as “cheerful, happy, a normal family person”—who you would meet at a college festival, or at McDonald’s, or at a pub. With a growing Dalit middle-class, entrepreneurs like Chandra Bhan Prasad have tapped into a vast new purchasing power through bydalits.com; in an age where Dalits are still killed for wearing jeans, “Chamar” is one of Prasad’s subversive, aspirational fashion labels. In fact, several iconic symbols of Indian culture owe their existence to Dalit craftsmanship and knowledge, including Meghwal embroidery, Banarasi sarees, Punjabi juttis, Bengal’s classical music instruments, Gond paintings from Madhya Pradesh, and more.

But for Indian brands to tell stories about the incredibly diverse groups they cater to requires a more conscious, long-term commitment to diversity and inclusion, as well as purpose. Both are proven drivers of high-growth: “Creating a diverse workforce and using their prowess and experience … is not just a politically correct move, but the only way to not go out of existence.”

If Zomato has indeed created jobs and upward class mobility for thousands, without the usual caste-based discrimination, wouldn’t those be rare, compelling, aspirational stories to lead with? Apart from the improved financial performance that these strategies guarantee, it’d also reduce the number of ads in the world that need explainers.

Sanjana Ramachandran is a writer and marketer who has worked with brands like Tide, Ariel, The Ken, and The Caravan. She tweets @ramachandranesk. Views are personal.

Disclosure: Ratan Tata is among the distinguished founder-investors of ThePrint. Please click here for details on investors.

Why news media is in crisis & How you can fix it

But the news media is in a crisis of its own. There have been brutal layoffs and pay-cuts. The best of journalism is shrinking, yielding to crude prime-time spectacle.

ThePrint has the finest young reporters, columnists and editors working for it. Sustaining journalism of this quality needs smart and thinking people like you to pay for it. Whether you live in India or overseas, you can do it here.