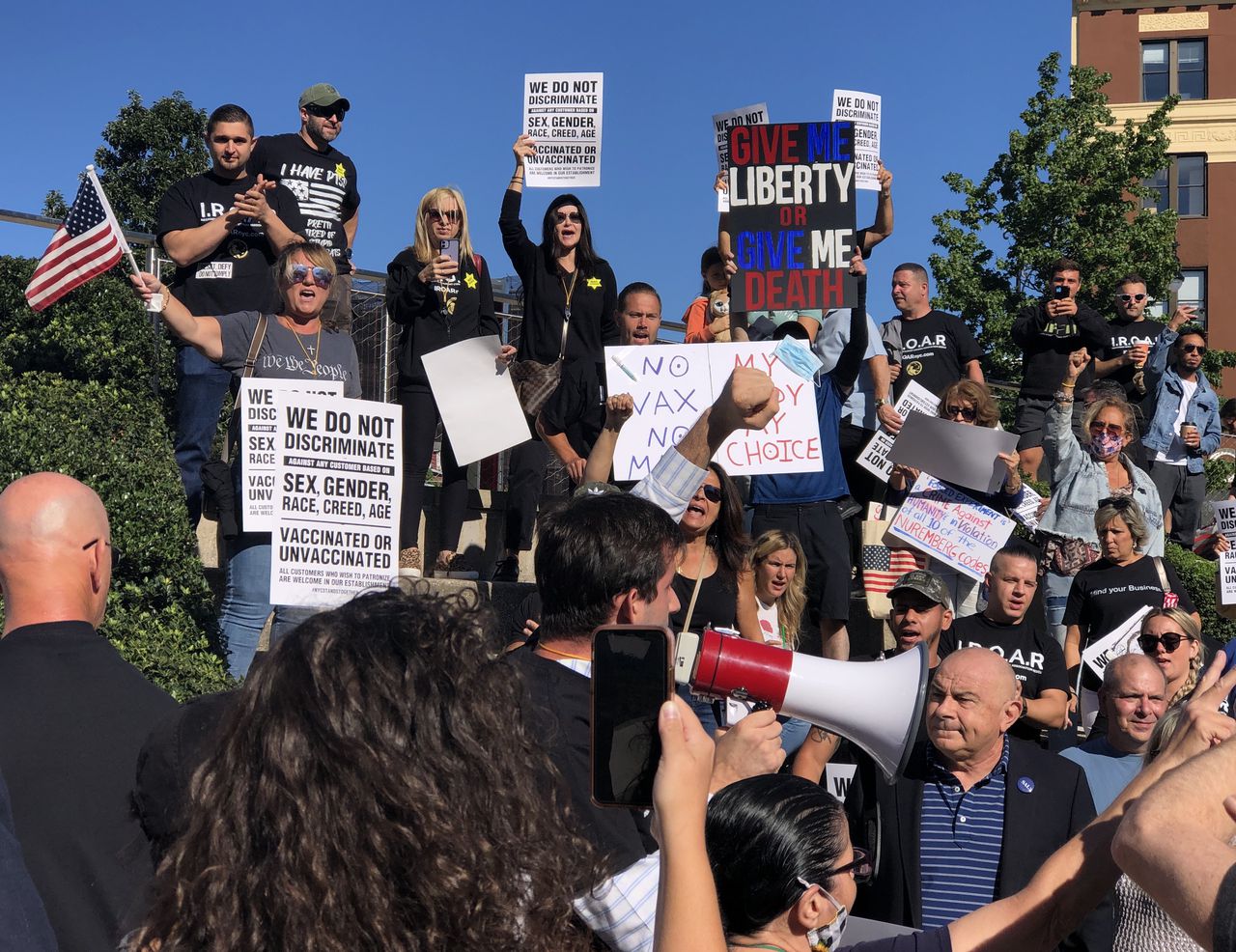 STATEN ISLAND, N.Y. — The word “unconstitutional’’ is being used a lot these days by those who oppose coronavirus (COVID-19) vaccine and mask mandates put in place by local governments and public institutions.

But do current mandates, in fact, violate our constitutional rights?

The answer is no, according to an expert on constitutional law at Brooklyn Law School.

Currently, the federal government isn’t requiring the public to be vaccinated against COVID-19, but it does mandate vaccination in some scenarios — and members of the military are required to be vaccinated.

New York City requires proof of COVID vaccination in indoor settings, and city Department of Education employees are required to be vaccinated. Masks are being required for students in the city public school system as well. And under the COVID Safety Requirement mandate, New York City’s municipal workers need to get the coronavirus vaccine or face weekly testing.

Such mandates are consistent with the 1905 U.S. Supreme Court case at the legal heart of this argument — Jacobson vs. Massachusetts — William Araiza, a Stanley A. August Professor of Law at Brooklyn Law School with an expertise in constitutional law, told the Advance/SIlive.com.

The case centered around Massachusetts’ mandatory smallpox vaccine, and the court upheld the authority of the state to enforce compulsory vaccine laws, Araiza said. The claim was that an individual has a liberty interest in refusing the vaccine, but the court ruled in favor of the state of Massachusetts.

“The gist of it is that public health interests trump those individual liberties when it comes to things like vaccinations,’’ said Araiza, who earned his law degree from Yale University.

Araiza speculated that the Supreme Court today is unlikely to overturn that decision, despite the implication of one justice, Neil Gorsuch, that he might consider it. Gorsuch has implied that he might reconsider Jacobson based on religious implications and church services.

“I suspect that they would support Jacobson, but there’s just no guarantee,’’ Araiza said.

Another factor to consider is the efficacy of vaccines at the time of the decision, he said, noting that the court may have ruled differently “if Massachusetts had less compelling evidence that the vaccine was a useful tool.”

“Given what we know about the effectiveness of COVID vaccines, I think it would be likely that the court would rule the same way today,’’ he added.

In 1922, the Supreme Court further clarified in Zucht vs. King that a school system could refuse admission to a student not meeting vaccination requirements, and that this would not be in violation of the 14th Amendment’s Equal Protection Clause for singling out a particular class of individuals, the National Constitution Center says on its website Constitution Daily.

Then, in 1944, in Prince vs. Massachusetts, the Supreme Court held that states may require vaccination regardless of a parent’s religious objection, making it clear that religious exemptions offered by states are elective, rather than mandated by the First Amendment, the Constitution Daily explains.

But does the Constitution specifically address mandates in the name of public health?

“It does not,’’ Araiza said, explaining that the Constitution gives the federal government certain enumerated powers.

“All residual remaining powers remain with the states,’’ he said. “Scholars call that residual power ‘police power;’ the power to regulate for health and safety — and that’s a very broad power.’’

When it comes to mandates by public schools and universities, the Jacobson ruling supports them, he said. In fact, an additional argument in support of universities lies in the fact that students have a choice not to attend a school with a mask mandate.

He pointed to a recent case in Indiana, in which a federal appeals court declined to grant an injunction against Indiana University’s campus vaccine mandate after it was challenged in a lawsuit by students who said it violated their constitutional rights.

“The court said people have lots of opportunities to go to lots of universities,’’ Araiza said. “If you don’t like the vaccine, you can just go somewhere else.”

Conversely, states have the right not to have mandates, he said.

Mask mandates, being even less intrusive than vaccine mandates, are even more likely to be supported by law, he said.

“Following Jacobson, I think the only difference is that mask mandates are less intrusive, they don’t change your body. You can’t un-take a vaccine,” he added.

So, are state-mandated vaccines in our future?

“If a state wanted to mandate a vaccine, then back to Jacobson and whatever the court would say,’’ he said. “I suspect they would support Jacobson, but there’s just no guarantee.’’

And do protestors have a legal leg to stand on?

“They’re not making a lawyer’s argument,’’ Araiza said. “They are really making kind of a rhetorical argument that this is not freedom, and if it’s not freedom, it must violate my constitutional rights.

“I think these arguments would lose in court, but the point is really to kind of make a broader political statement that these mandates are contrary to our liberties.’’

Yet, when it comes to a future federal vaccine mandate, many law experts doubt we’ll ever see one.

“[President Joe] Biden said he had asked DOJ [the Department of Justice] for an opinion on one, then he quickly walked that back,’’ Josh Blackman, a constitutional law professor at the South Texas College of Law Houston, recently told the National Constitution Center in its “We the People’’ podcast. “So, I think we’re not going to see it.”