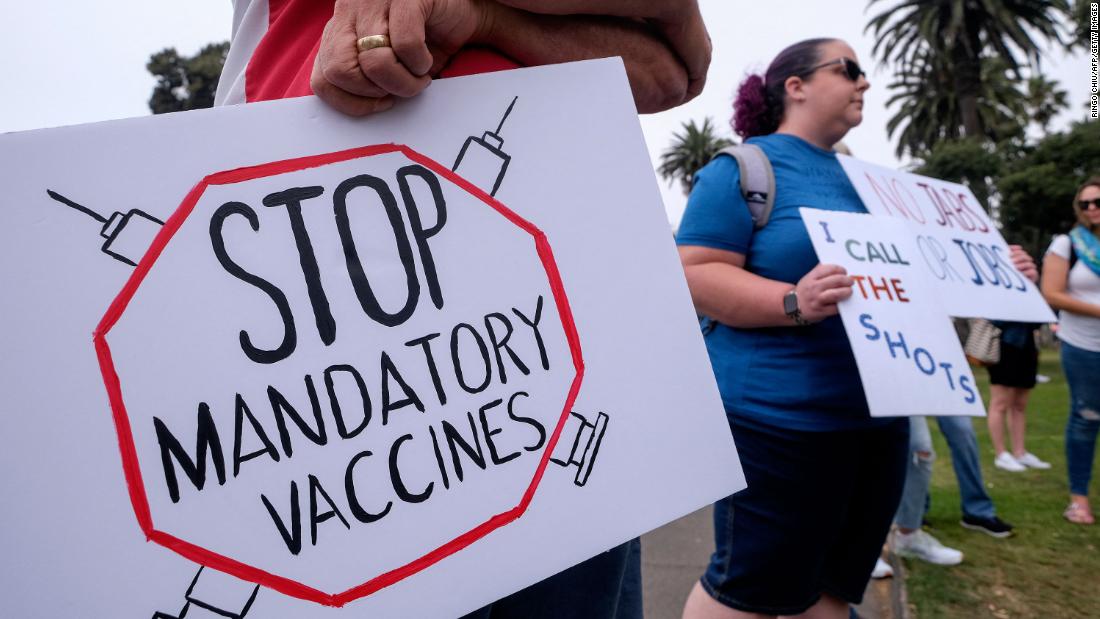 “We need to start talking about the choice to remain unvaccinated as the choice to go out and drive intoxicated,” CNN Medical Analyst Dr. Leana Wen told CNN’s Wolf Blitzer.
Wen’s remarks come after the Biden administration announced Thursday a Covid-19 vaccine mandate plan that directs the US Labor Department to require all businesses with 100 employees or more to ensure their workers are either vaccinated or tested once a week. President Joe Biden also signed an executive order requiring all government employees to get their Covid-19 vaccine shots, with no option for regular testing to opt out.

And while some Republican officials have criticized his move as overreaching, health experts say the President should have implemented stricter measures to curb the recent surge of Covid-19 cases.

“From a public health perspective, it is not overreach at all. And in fact, I wish that they came out earlier and went even further,” Wen said. “We’re in the middle of the biggest public health crisis of our lifetimes. We have more than a thousand Americans who are dying every single day. We, as a society, set laws that protect people’s health and well-being all the time.”

An average of 1,110 people died in the US from Covid-19 each day over the last week, data from the US Centers for Disease Control and Prevention showed on Thursday. The rate of deaths since late August is the highest it has been since early March.

While 73.5% of those ages 12 and up have been vaccinated with at least one dose, tens of millions of eligible recipients remain unvaccinated as the highly contagious coronavirus Delta variant continues to grip pockets of the country. Around 62% of the same age group is fully vaccinated as of Friday.

“The vast minority of Americans are resistant to vaccination, but that’s where the virus has been circulating,” CNN Medical Analyst Jonathan Reiner told CNN’s Don Lemon on Friday. “We live in a country that has rules. You can’t smoke in most buildings in the United States, and you can’t drive drunk. You can’t smoke on planes. And you can’t blow virus into my face.

“That’s how it has to be in this country. And if you’re going to be a persistent threat to the public health by refusing to get vaccinated, well your actions have consequences, and the consequences may be you can’t work at your job.”

An August poll from Gallup showed that 56% of Americans favor vaccine requirements at work while 53% support them for restaurant dining and 61% approve of them for air travel.

And as for those who have not yet gotten their shots, it’s not too late to convince them, former US Surgeon General Dr. Jerome Adams said Friday.

“I found that when I talk to them with compassion and with empathy, I can convince a lot of them over time to get their vaccination.”

Six US states saw at least a 10% increase in new Covid-19 cases in the past week compared to the week before, data from Johns Hopkins University showed Friday, while the other states didn’t see a change or experienced a decline in cases altogether.

Alabama, one of the states that saw the recent drop in new cases, is now facing a shortage of 60 intensive care unit beds — an uptick of 20 from last Friday, the state’s Health Officer Dr. Scott Harris said.

That’s 60 patients “who are receiving critical care because they’re chronically ill, and yet they don’t have an ICU bed,” Harris said Friday.

“They’re being cared for in an emergency department or a ward bed that’s been converted to an ICU room or on a gurney in the hallway,” Harris said.

Alabama on Thursday reported 2,667 Covid-19 hospitalizations and 53 deaths, he added.

In West Virginia, 252 Covid-19 patients are in ICUs and another 141 are on ventilators, marking the most people hospitalized with the disease since the pandemic began, Gov. Jim Justice said Friday.

“A high percentage of the folks in the hospitals are unvaccinated,” Justice said. “We lost another 38 people since Wednesday. We’re going to continue to lose people in this surge without any questions,” he said.

Minnesota health officials linked at least 69 Covid-19 cases to the State Fair, according to a statement obtained from the state’s health department by CNN affiliate WCCO. The Minnesota State Fair’s website says the event ran from August 25 through September 5 in Falcon Heights.

Meanwhile, the debate over mask mandates remains heated in many states, especially when it comes to schools.

In Kentucky, schools will have the choice of whether they will mandate masks, after the General Assembly overrode the governor’s partial veto on that portion of a bill pertaining to Covid-19 provisions in schools, officials say.

Kentucky Gov. Andy Beshear vetoed the part of the SB1 bill that would eliminate the mask mandate for K-12 schools and leave it up to school districts to decide if masking is necessary, he said at a media gaggle on Friday.

Beshear said that the Senate’s recent rejection of a statewide school mask mandate is the wrong choice — and one that will reap harmful results.

“Mask requirement for schools is not only the right thing to do for our young people, especially those who are too young to even get vaccinated,” Beshear said. “It’s our best way to keep our children learning in the classroom.”

“A member of the executive branch of government does not have the authority to mandate something such as this,” Reeves said.