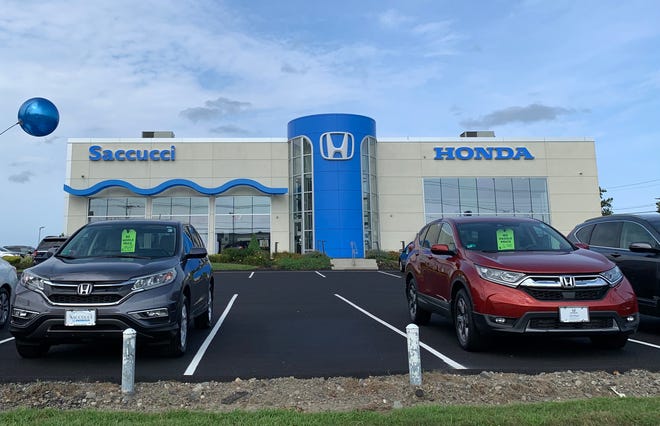 NEWPORT — Newport County automobile dealers are bracing for an inventory shortage that could last well into 2022, which is already leading to fewer options on car lots across Aquidneck Island.

In July, CNN reported new car inventory could be stalled for months because of a worldwide semiconductor shortage and supply-chain disruptions caused by the COVID pandemic.

Kevin Clare, the general manager and a partner at Newport Chrysler, Dodge, Jeep, Ram on West Main Road in Middletown, said the dealership is currently carrying about a third of the inventory it normally does.

‘Our numbers are off’

“Right now, the manufacturers, whether they are domestic or imported, are all feeling this parts crunch. And from what they’ve told us, it’s not going to be fixed anytime soon,” Clare said.

The disruption, he said, has affected the consumer more than it has affected dealerships, but they are still feeling the impacts.

“Our numbers are off, but we still have some inventory to sell,” Clare said. “Where from the consumer’s point of view, it’s a little more difficult because they don’t have the selection that they’re used to, and the manufacturers aren’t offering the incentives that they usually do.”

Despite the shortages, in the past 15 months, Clare said his dealership has sold more new cars than manufacturers are giving to them, partly because Clare said there is a lot of online business. For the local customers who might want something specific, they’ll order directly from the factory and it’ll come in within eight to 10 weeks.

The biggest challenge for the customers, Clare said, is having to wait for their new vehicle to arrive.

“Normally in the auto industry, the consumer is used to being able to shop at different dealerships for what they’re looking for, where now, there’s just not a lot of inventory to choose from. So their choices are limited,” Clare said.

A 50% decrease in inventory

At Saccucci, Meyer said even the pre-owned vehicle inventory is suffering because while customers aren’t coming in at the same volume to purchase new vehicles, they aren’t trading in their old ones, either.

“So we are limited to what we can control with regard to inventory. We’re still ordering cars from Honda,” he said. “Right now, we just finished our allocation for November and are still significantly off.”

Honda, he said, hasn’t shut down factories that he is aware of, but the company is limiting the amount of vehicles that can be ordered.

“Normally our volume is somewhere between 100 and 110 new and used vehicles combined, and over the past six or seven months, we’ve been averaging 70 to 80,” he said. “We’re off a bit there as well. We’ve relied a little bit more on our pre-owned vehicles.”

When the COVID pandemic began shuttering businesses last year, Meyer said his dealership foresaw that this would happen. So it began creating a contingency plan to manage the inventory, limiting how many vehicles it sold outside the area.

“We’re doing what we can to control what we have the ability to control,” Meyer said. “So we can’t order every vehicle that we would want to have, but we are making sure that we have at least the floor models in stock so that people can come and test drive.”

“Customers are understanding of the fact that inventory’s out of our control, so for the most part, people have been really good about it,” Meyer said.

Bo St. Angelo, who is the pre-owned sales director at Newport BMW, said early in the pandemic, BMW diverted cars to China because it thought the Chinese economy would rebound quicker. Now more cars are coming in to Middletown and the inventory is building back up.

“We are getting cars in more and more, but they are sold, so inventory levels on the lot,” St. Angelo said. “If you go to any lot, it looks very empty because when the cars come in, they are pre-sold. It’ll be like that for a while, but as far as sales go, like take our store, we usually sell 100-120 cars per month, new and used, and we haven’t fallen off that. We’ve stayed right there.”

More:Newport area pubs, restaurants face chicken wing shortage — and it may just be the start

Though the inventory has been off, St. Angelo said, BMW of Newport hasn’t been increasing vehicle prices like some other dealerships have been doing. That’s something the dealership’s general manager and owners are completely against doing.

“Think about it like this,” St. Angelo said. “I guess you could say if another BMW store is getting $10,000 over sticker, right, then I guess you could say we’re making less than them. But it’s not right to do. We’re making enough money, but we don’t want to essentially rip the customer off, so we are keeping it at MSRP and discounting at times. Like if a customer needs help, we’ll give them the help.

“At the end of the day, that customer is the price. You’ve got to help them get into a car, because there’s no inventory.”