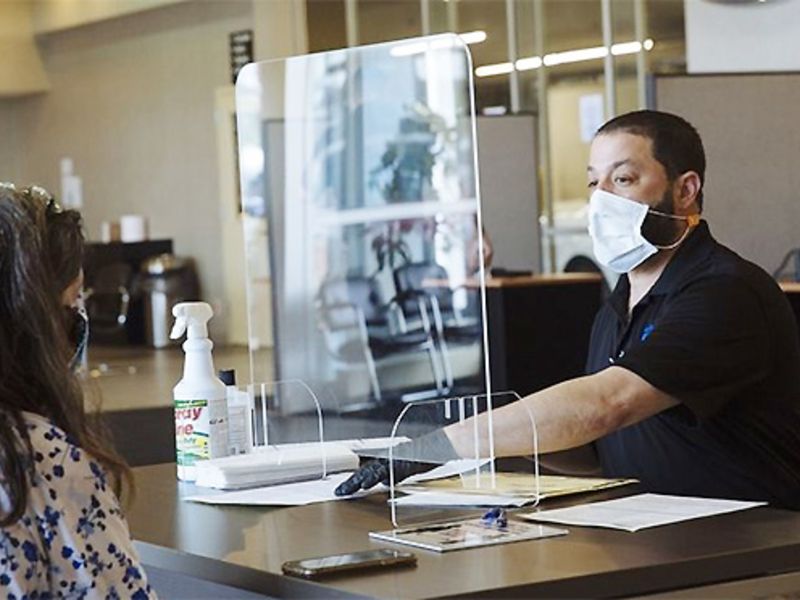 And at a dealership in Daphne, Ala., nearly 30 employees, most of whom were not vaccinated, contracted COVID-19 within a week in late July, WPMI News reported July 29. Eastern Shore Toyota owner Shawn Esfahani, who said he “almost died” from the disease in December, is now offering vaccine incentives to employees, according to the station. The dealership also established weekly $1,000 drawings for newly vaccinated customers and is hosting Pfizer vaccine clinics onsite.

The National Automobile Dealers Association last week said it hadn’t changed its June 14 recommendation, which refers to the CDC’s earlier guidance that the vaccinated did not need to wear masks, but also recommends that dealers stay “abreast of the latest federal and state mandates and best practice suggestions” and could mandate masks and vaccines if they wished.

“We are closely monitoring what is a very fluid situation,” NADA spokesman Jared Allen wrote in an email.

Many dealerships are “contemplating less of a ‘carrot’ and more of a ‘stick’ approach to getting their employee vaccination numbers up,” Fisher Phillips wrote in an Aug. 3 advisory.

Still, the firm’s Troutman told Automotive News that dealerships “seem to be less likely” to institute vaccine mandates than businesses in general. “We’re not seeing a lot in terms of vaccine mandates in the automobile industry,” said Troutman, chairman of the firm’s national vaccine work group.

A recent informal survey of clients that received more than 700 responses found “overall, about 15 percent of employers” would enact vaccine mandates or had considered them, he said. Just 9 percent of automotive clients felt that way.

Even so, Troutman estimated companies on the whole are more open to vaccine mandates than in the past. He described a sense of frustration among businesses in general as COVID-19 resurged after seeming to recede.

Companies that get too lax on workplace precautions run a risk. “We’re seeing [the Occupational Safety and Health Administration] out there doing more inspections,” Troutman said.He noted some companies opted to institute employee COVID-19 testing, a “middle ground” approach.

The company announced Aug. 6 that it was considering “rolling the mandate out to its entire employee force in the coming months.” However, Badar said last week that ZT plans to be “a little more ginger” with dealership employees, likely offering education rather than a mandate.

“As you know, the labor market’s shot,” Badar said.

While he estimated that the majority of the company’s dealership employees were vaccinated anyway, he noted that some of ZT’s stores are in rural areas where “education is quite needed” to overcome resistance.

ZT plans to encourage vaccination by leveraging its healthcare holdings to create a COVID-19 hotline employees can tap for answers about the inoculations, Badar said. The corporate office’s example also has helped. Badar said he saw an uptick in vaccinations at subsidiaries since the announcement of the headquarters mandate.

The company encourages but doesn’t require masks among dealership employees except when required by state and local law, he said.

The outbreak tied to Nissan of Durango suggests that dealerships should consider policies for contract workers as well as full-time staff.

The deaths and most of the dozen infections were associated with a group of independent contractors hired to drive vehicles for off-site sales, according to Nissan of Durango finance manager Warren Gutierrez.