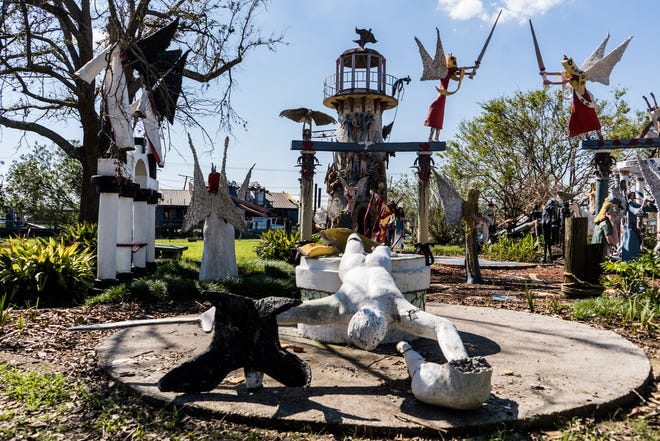 Hurricane Ida damaged one of Terrebonne Parish’s most recognizable and unique landmarks, the Chauvin Sculpture Garden.

Owned by Nicholls State University, the garden was created by self-taught artist Kenny Hill when he moved to Chauvin in 1988. A brick layer by trade, Hill created more than 100 concrete statues along Bayou Little Caillou before walking away from his art and his home about a decade later. Labeled a recluse, he left no trace of his whereabouts, but about 10,000 visitors each year visit the menagerie of angels, Cajuns, self portraits and other figures he left behind at 5337 Bayouside Drive.

More:Take a magical mystery tour of the Chauvin Sculpture Garden

“It has gotten some damage from hurricanes before like Katrina and Gustav, but nothing of this magnitude,” said Gary LaFleur, president of the Friends of the Chauvin Sculpture Garden. “The winds in Chauvin were pretty high, maybe as high as 150 mph. A lot of trees came down.”

FEMA aid:Here’s what FEMA is doing to help Terrebonne and Lafourche residents recover from Hurricane Ida

Several of Hill’s pieces sustained damage from falling trees, including one of LaFleur’s favorite parts of the garden, called the “Flowered Path.”

“One tree branch came down on part of the Flowered Path, where the artist Kenny Hill was able to make angels look like they’re flying in the air,” LaFleur said. “But they weren’t made to have a big branch on them. One of those angels is carrying a baby, and somehow the baby fell out of the angel’s arms and got caught up in the branches but did not hit the ground. We caught the baby and stored it away so the baby is OK, but most of the angels took some damage.”

The storm also toppled a tall column bearing one of Hill’s self-portraits being spirited away by an eagle.

“I used to stare at that because there was a rebar in the sculpture’s arms which connected to the eagle,” LaFleur said. “It looked like that eagle was going to break off one day. What’s weird is that we had all this wind, but the eagle did not break off. But the whole column just slipped down. That was devastating.”

Fans of the sculpture garden sounded off when photos of the damage surfaced on Facebook.

Jonathan Foret, executive director of the South Louisiana Wetlands Discovery Center in Houma, said it pained him to see the garden’s damage.

“It may seem odd, but of all the thing I didn’t want to see this broken the most,” Foret said. “Not to make insignificant all the people that lost their possessions and homes. I know that is most important. I’m not sure why, but maybe I do. It’s an important symbol of Chauvin … and Terrebonne Parish. I want to be a part of putting this back together. It’s symbolic … and I hope it can help us all heal.”

Organizers plan to restore the garden and are asking the community for help.

“It’s pretty early in our plan, but the plan is to restore it,” LaFleur said. “As it is right now there are still plenty of pieces that were unscathed. No big trees just fell on the middle of it and decimated everything. There are certain parts of it that look like they did the day before.”

To help the garden in its restoration efforts, visit the Chauvin Sculpture Garden’s Facebook page.