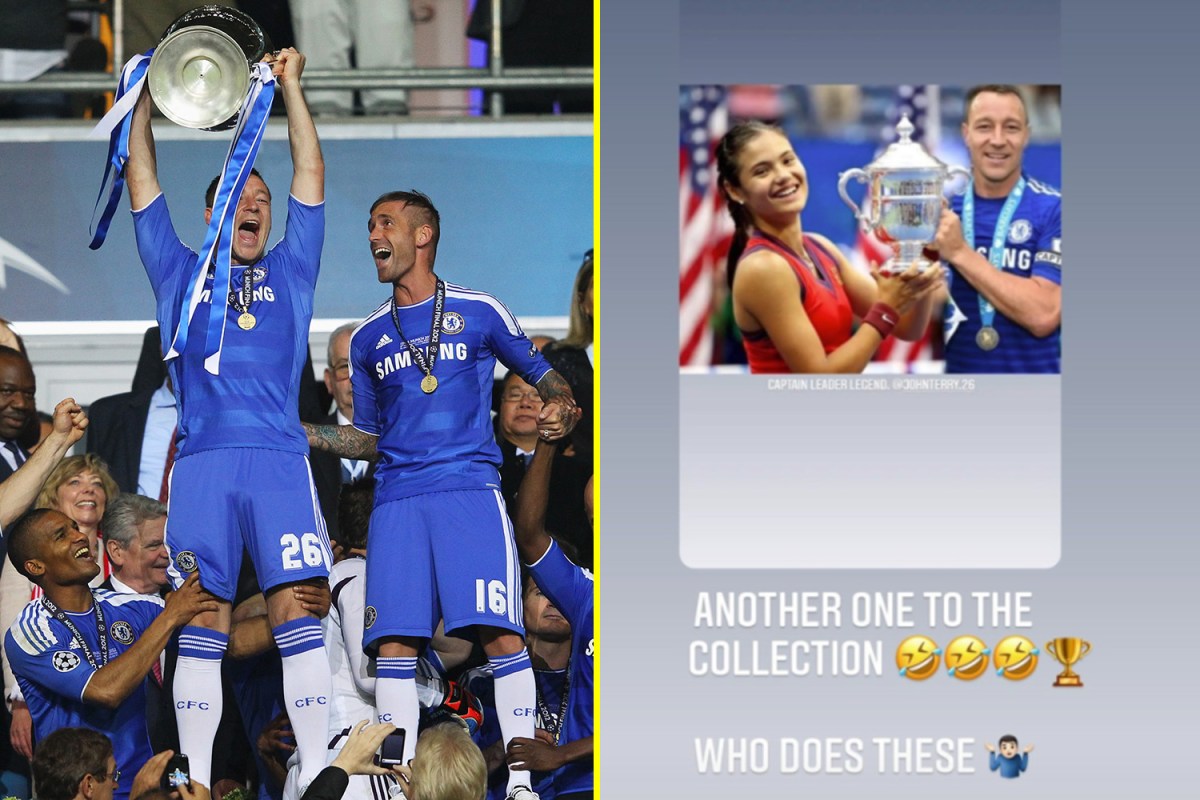 The John Terry full kit gag is still alive and well, with the Chelsea legend poking fun at himself in his Instagram story.

The joke was born in 2012 when Chelsea finally clinched their first ever Champions League title by beating Bayern Munich on penalties at the Allianz Arena.

They did so without the help of then-captain Terry, who was suspended for the final after picking up a red card in the previous round against Barcelona. But that didn’t stop him from celebrating the win.

Emerging onto the pitch after Didier Drogba fired in the winning penalty as if he’d just taken part in the full 90 minutes plus extra-time and nerve-wracking shootout, Terry was fully dressed in his playing gear, with socks and boots included.

The memes of Terry taking the credit for the achievements of others have been rolling in ever since, and he has acknowledged the latest ones of him ‘celebrating’ the US Open women’s singles title with British sensation Emma Raducanu.

“Another one to add to the collection,” Terry’s Instagram story caption read, followed up by, “Who does these?”

But this time he’s joined in on the fun, with Raducanu still fresh from her astonishing and record-breaking Grand Slam win.

Terry departed his role as Aston Villa’s assistant manager during the summer as he looks to move up to the role of head coach elsewhere.

The 40-year-old’s name has already been thrown in the conversation at Nottingham Forest, but Terry also used Instagram to distance himself from the job.

Incumbent manager Chris Hughton appears close to an exit with his side sitting at the bottom of the Championship table, but Terry feels any links are disrespectful to Hughton.

“I just want to distance myself from the Nottingham Forest job and all the speculation surrounding myself with the job,” Terry’s post read.

“Unfortunately I can’t control the media but it’s important to know that it has nothing to do with me whatsoever.

“Chris is the manager and someone I have a lot of respect for.

“I wish Chris and the team all the very best for the season. It’s unfair when Chris is in a job to put my name to something.”

Terry has been warned off the job by talkSPORT host Simon Jordan, and was previously a candidate for the vacancy at Swansea which later went to Russell Martin.

It’s the free football app that keeps you one step ahead of your mates with short, sharp and shareable content.