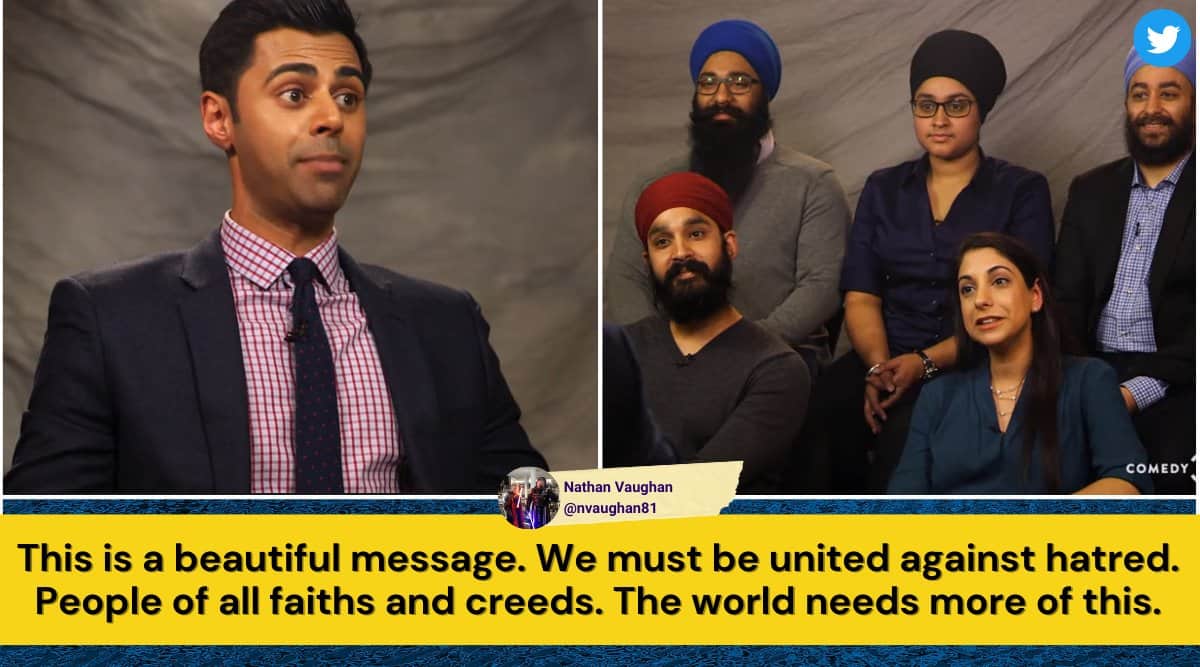 There is a lot of buzz on the internet on Saturday, which marks the 20th anniversary of the 9/11 attack in the United States. Amid the chatter, there is a conversation underway on the spread of Islamophobia in the country, and how it has even affected non-Muslim communities like the Sikhs. In light of this, a reply by two members of the Sikh community is winning the internet.

In a video from 2016 that is going viral again, members of the Sikh communith living in the US speak about their experiences with discrimination and how Islamophobia has affected them. In conversation with comedian and TV show host Hasan Minhaj, the panellists talk about how they are often mistaken to be Muslims and targetted for the colour of their skin and for wearing turbans.

At one point in the conversation, Minaj suggests they could avoid some of that crude discriminatory remarks simply by telling everyone they’re not Muslim. The response to this by one panelist is moving people online. “It’s just not an option for us to throw another community under the bus,” says Simran Jeet Singh. “Even if it means things are harder for us, we believe it’s the right thing to do.”

Another panelist adds that Sikh values don’t allow them to do so, and everyone needs to do better to make the country better.

Not deflecting hate to others doesn’t mean being ashamed of who you are, nor does it mean being afraid to stand up for yourself.

Rather, it’s about finding the courage to love your neighbors, even when it’s hard, and knowing that doing so makes the world more just for all of us.

The video re-shared by Singh on Twitter started a serious conversation online with people discussion how, even after two decades, the situation hasn’t improved.

The video clip is from a 2016 interview Minhaj conducted when he was doing ‘The Daily Show’ at Comedy Central. It was around the time former US president Donald Trump proposed a ban on Muslims entering the country. The show had also highlighted how Sikhs become an easy target for Islamophobes, and are often subject to many hate crimes.

The response garnered a lot of attention online and many shared their own experience after facing racist backlash following the 9/11 attacks. Many people also shared how the Sikh community didn’t get deterred by it, and continued to help while standing up for themselves.

This was incredibly moving to watch! The Sikh community has suffered greatly from #Islamophobia. Sending love and respect to all my Sikh brothers and sisters for their allyship and solidarity no matter the cost. @simran @valariekaur and many more! #InThisTogether #20YearsSince https://t.co/rwCCP8gi3w

Sikh love and respect for all communities is something I have seen growing up and which I will always be in awe of https://t.co/zkzKjQgAcU

Difficult to put into words how much love and respect we have for our Sikh sisters and brothers. Our safety is so deeply tied to one another. https://t.co/ghnDAi0EFj

One of the many reflections I’m having is just how much suffering our Sikh brothers and sisters endured in the aftermath of 9/11. Friends like @simran and countless others put their own lives at risk defending the rights of Muslims and it’s something I’ll never forget. https://t.co/hKGj6KPkS0

Brilliant and moral response. If all of us could show that kind of loving kindness towards others this world right here could be a paradise. Thank you. https://t.co/bLX4j46wL2

Peak solidarity, care, & humanity. And these aren’t just words. The Sikh community has consistently shown up to support the Muslim community. https://t.co/ufS4n1fOjd

It’s a sentiment of solidarity that is touching beyond words. Thank you to the Sikh American community for always defending Muslims. ✊🏾 https://t.co/a3GTqAgnyv

Have always appreciated this ❤️ and I agree. My whole life people would say something discriminatory about Indians or Mexicans (either assuming I was one or thinking I’d be ok hearing this) and I’d always fight against it.

Shortly after 9/11 I volunteered for NY Cares day at a LES school. Some Sikh men arrived late because they had been attacked on the way. Even though their friend was hospitalized, the rest still came and worked. I am now as I was then amazed by their kindness and generosity

It’s just like the stories I’ve heard of Black conservatives going to Trump rallies and also being attacked and harassed because these racists think “all black people are the same”. They dont distinguished between sub-groups. White ppl are seen as individuals, poc are not.

Perfect response. Thank you for being a great human! ❤ We need as many as we can get, these days are so hatred-fueled and filled with Covid sickness. I give you all of the respect I have!

This is a beautiful message. We must be united against hatred. People of all faiths and creeds. The world needs more of this.

I grew up in Toronto where there is a large Sikh population. My dad had a very good friend who was Sikh and he once told me if I was in trouble in a public place, seek out a Sikh man as they will always help. I have never forgotten that ☺️