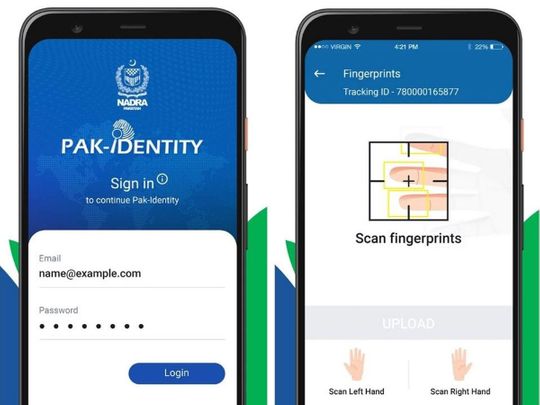 Islamabad: Pakistanis will now be able to apply for ID cards and sign up for bank services via their smartphones with the new biometric verification system launched by National Database and Registration Authority (NADRA).

Talking to Gulf News, NADRA Chairman Tariq Malik said the organisation’s goal is “to revamp Pakistan’s identification system into a robust citizen-centric system rolling out digital public goods.” He believes that technology that can’t empower ordinary people and enhance the state’s capacity to deliver on the social contract is meaningless.

Digitalisation is an attempt to break free from the conventional mindset that people have to come to government offices to get services as NADRA aims to transform the system so that “state services are available to the people at their doorstep” Malik said.

Using the digital ‘Pak Identity’ app on smartphones, all citizens including those living abroad will be able to digitally verify fingerprints, photographs and documents required for the ID card. The app captures biometrics and scan documents digitally by using the phone camera. The services are also available at http://id.nadra.gov.pk website.

Prime Minister Imran Khan, who believes that digitalisation is key to ensure transparency in the system, appreciated the transformative initiative by NADRA and described it as a “revolutionary step in providing convenience, especially to overseas Pakistanis.”

The Pak-Identity mobile app launched last week for ID verification has now integrated a system required for the biometric verification services for the banking and payments sector. “Pakistan is one of the first countries in the world to implement the technology on a national level” the authority claimed.

It would help improve financial inclusion, ease of doing business, encourage startups and fintech organisations and e-governance initiatives by offering remote identification and e-KYC. The electronic know your customer (e-KYC) is the mandatory process of identifying and verifying the client’s identity when opening an account and the process includes verification of ID card, face, documents such as utility bills as proof of address, and biometric verification.

Banks in Pakistan will utilise the digital app on smartphones to record and verify biometrics of the potential account holders from their homes. The system is described as a “massive leap” towards digital banking in Pakistan, offering a convenient and secure way for people to open bank accounts by confirming their identities on their smartphones without visiting bank. The pilot service will be initially launched at five banks nominated by the State Bank of Pakistan (SBP). The service will be extended to other banks and SBP-licensed Electronic Money Institutions (EMIs) after required formalities.

“This new mobile-based verification service for banks and EMIs is in line with SBP’s financial inclusion initiative while creating opportunity for rapid onboarding using remote identification and e-KYC features,” said Dr Reza Baqir, country’s central bank governor. The adoption of smartphone biometric verification system can pave the way for millions of unbanked people to sign up for bank accounts while reducing the operational costs of bank and improving security, Dr Baqir said.

Banks and EMIs in Pakistan are already working on the mechanism to utilize the new service launched by NADRA to offer digital banking services to its customers to open bank accounts and digital wallets. This month, NayaPay became Pakistan’s first EMI after receiving commercial approval from the State Bank.

NayaPay’s digital wallet technology enables users to perform multiple financial transactions quickly and securely on their smartphones anytime, anywhere. The company also aims to address the needs of underbanked citizens of Pakistan enabling them to create a digital wallet account within a few minutes.