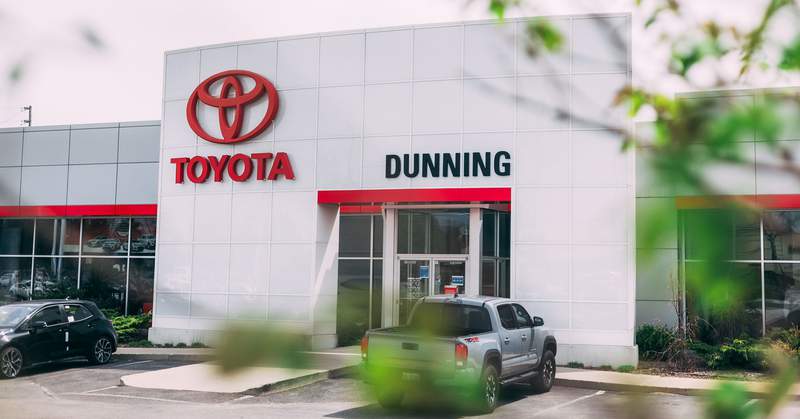 ANN ARBOR – Longtime owner of Dunning Toyota and Subaru, Julie Dunning is selling her family-owned business after 51 years in the Ann Arbor community.

Her husband, Al Dunning, opened a Toyota dealership on Main St. in 1970 and Julie became involved in the business in 1973. Eighteen years later, they acquired the Subaru franchise on Jackson Rd. and moved the Toyota dealership next door in 2000.

That same year, Al passed away and Julie became president and dealer principal of the company.

She said she got the sense that other dealership owners in a male-dominated industry didn’t think a woman could continue the business.

“I had an awful lot of guys calling up offering to buy it,” she said.

She decided to stay the course and grew the business to 150 employees.

Dunning has donated regularly to numerous local causes over the years, including Food Gatherers, Humane Society of Huron Valley, IHN at Alpha House and Arbor Hospice. Dunning Toyota is also the largest drop off site for Toys for Tots in Washtenaw County.

Her charitable work earned Dunning a nomination in 2016 for TIME Dealer of the Year award.

In honor of her late husband, she planted a Christmas tree and kept it lit for years.

“She always kept the lights on for him,” said longtime employee and E-commerce manager for both Dunning Toyota and Subaru, Elena Manalp.

Dunning said what sets her businesses apart is that they’re some of the last remaining family-owned dealerships in Metro Detroit.

“Here, you can walk in and talk to Julie Dunning,” she said. “That’s something I think is really important. We’re closer knit because we’re all just one family. The really great thing about it is we’re selling to a guy who it’s going to be just him and his family. He’s still going to be on premise 100% of the time.”

Dunning said she wasn’t looking to sell this year. She was introduced to the new owner, Michael Speigl, when she was on the search for a new Chief Financial Officer.

“It’s unreal because selling hadn’t even crossed my mind,” she said.

All three of her sons and two grandsons work for the businesses. Her sons’ first jobs were at the dealerships as porters and car cleaners in their high school years. If she was to ever sell, it would be to someone who shared the same values and prioritized the family experience, she said.

Originally from western Michigan, Speigl attended University of Michigan and got a job in the automobile industry after graduation. In 2004, he was given an opportunity in Florida, where he has been based ever since. He bought and sold an auto group during his time there and called the opportunity to purchase Dunning Toyota and Subaru a “dream come true.”

“(Julie and I) came to a good place pretty quickly,” said Speigl. “She’s really understanding but firm. She’s everything you’d want in a business partner where she’s not a pushover by any stretch.”

Speigl said the two have been in talks since the spring and did not disclose the price of the sale.

Speigl and his controller are relocating with their families to Ann Arbor. Aside from Dunning and her CFO, all of the Ann Arbor employees are keeping their jobs.

“Bigger companies come in with big teams and have their own people, which is normal and great … I’m coming by myself,” he said. “I’m just so excited to be a part of a well-run, well-operated store with a lot of great employees.

“The other thing that makes it really exciting for me is the Dunning organization is very entrenched in the community. Everyone here is very local and you can feel it when you walk in and talk to the employees.”

“She always says the employees are the assets of the company,” said Manalp, who has known Dunning since the late 1990s. “She always valued all of us.”

Manalp said when employees were first told about the sale, many were shocked and saddened, but understood the timing is right for Dunning.

“We trust her judgment that she will always put the wellbeing of the others that she cared for over the years,” said Manalp. “I think the new owner is so much about values and community and family.

“I think his personality and what he stands for also are going to be great — not only for us as a dealership, but also for the community of Ann Arbor.”

Selling to a bigger dealer would have been less complex for Dunning, said Speigl.

“I’m appreciative that Julie gave us the chance,” he said. “It speaks a lot to Julie’s character because she did that and went through that just for her employees.”

“I’m very excited to be turning our employees, customers, suppliers, vendors over to somebody who is going to take very good care of them,” said Dunning.

“This is a big move for our family and it’s about family,” said Speigl. “My wife and I have five kids. I know that the car market in Florida is bigger and more robust but it’s also more demanding. The market here is awesome, especially in Detroit, but it’s more geared toward families.”

The baton will officially be passed to Speigl on Sept. 1. His first step? Changing the names back to their originals: Toyota of Ann Arbor and Subaru of Ann Arbor.

“I’m going to still be checking in and saying hi to people,” said Dunning. “But this is his deal and I have all the faith in the world in him.”