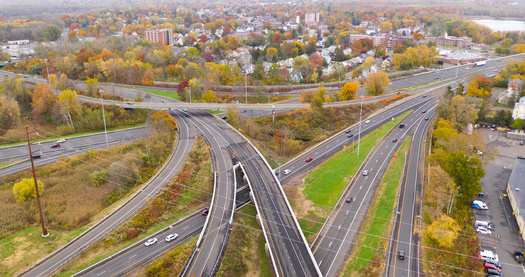 HARTFORD, Conn. – A new report reveals Connecticut is not on track to meet either of its 2030 or 2050 greenhouse gas emissions goals, and advocates say cutting transportation-related pollution is the way forward.

The Connecticut Greenhouse Gas Emissions Inventory, which reviewed air quality trends from 1990 to 2018, shows that the transportation sector is the state’s largest source of pollution, mostly from fossil fuel combustion in vehicles.

Connecticut’s Global Warming Solutions Act created a target to reduce emissions by 45% below 2001 levels by 2030. The 2018 Governor’s Council on Climate Change report unveiled that a 29% reduction in transportation emissions from 2014 is needed to meet the 2030 target.

Lori Brown, executive director of the Connecticut League of Conservation Voters, said one important step the state could take would be joining the Transportation Climate Initiative, or TCI. It’s a multi-state agreement that uses a cap-and-invest system to reduce pollution from gasoline and diesel fuel.

Proceeds from the initiative would be used to invest in clean infrastructure. Brown said TCI is crucial for a healthy future in Connecticut.

“We know it’s going to generate around $100 million dollars a year for things like converting dirty diesel school buses into electric school buses,” said Brown. “That cuts across urban, suburban, rural. It can do all kinds of things that local municipalities want to do like improving intersections and sidewalks and rail and transit options.”

TCI requires the Connecticut General Assembly’s approval to start the program. Brown said advocates are calling on the state legislature to pass TCI during a Special Session this fall.

TCI would also ensure that half of the program’s revenue would go to communities overburdened by air pollution.

HARRISBURG, Pa. — Pennsylvania is now the second state in the country to launch a program focused on training state and local leaders on tackling the challenges of climate change.

The Pennsylvania Climate Leadership Academy, run by the state Department of Environmental Protection (DEP), wrapped up its first program this week. About 150 people from nonprofits, state agencies, local governments and universities participated in the online courses that discussed the impacts of climate change on communities and policy-driven solutions to mitigate its effects.

“It’s not about doom and gloom,” Kunsch explained. “It’s about taking action and all hands on deck. All of us, down to the homeowner, making changes in our own homes with the way we use energy and with the way we commute. It starts with each of us. Every one of us has a role to play.”

Maryland was the first state in the U.S. to launch a Climate Leadership Academy. The next part of the training, called the Certified Climate Change Professional Program, starts in October and will offer courses on topics including climate science, greenhouse-gas emission inventories and vulnerability assessments.

Kate Semmens, science director at the Nurture Nature Center in Easton, which helps that community learn about environmental risks, is a participant in the Climate Leadership Academy. She helped develop a vulnerability assessment and Climate Action Plan for Easton, which is at the confluence of the Delaware and Lehigh rivers and at risk of flooding.

Semmens said the academy is important for municipality leaders because climate-change risks will have a direct impact on residents.

“A lot of the actions that these decision-makers can take related to climate change have co-benefits,” Semmens contended. “They’re gonna help with air and water quality. They’re gonna help with human health. Having that understanding that you can make these changes that are going to have multiple beneficial impacts is really important going forward.”

Pennsylvania’s average temperature has risen nearly 2 degrees Fahrenheit since 1900. According to DEP data, the temperature will rise another 5.9 degrees by 2050 unless greenhouse-gas emissions are cut.

According to data from the Union of Concerned Scientists and the Utility Workers Union of America, the nation lost at least 25% of its mining jobs between 2015 and 2019.

Jeremy Richardson, senior energy analyst in the Climate and Energy program for the Union of Concerned Scientists, said a key piece of the puzzle in the clean-energy transition is addressing the needs of the workers most likely to suffer the consequences.

“The big one here is the piece around five years of comprehensive wage replacement for the workers, facing the closure of a mine or a plant,” Richardson explained.

According to a report Richardson co-authored this year, the estimated cost of these supports for coal workers ranges from $33 billion to $83 billion in the next 15 to 25 years. He argued it is a small fraction of the funds needed to shift the country to a low-carbon economy.

Richardson contended the length of wage-replacement benefits is critical to help workers move into clean-energy sector jobs that offer comparable or higher wages.

“What we find happening in the economy is that workers will take the quickest path that they can find to get a new job, because they need to support their families,” Richardson observed.

Richardson emphasized the federal government should prioritize individual workers’ livelihoods through retraining and economic development programs, and be prepared to help minimize the impact of facility shutdowns on coal communities.

“I really, passionately believe that if we’re going to solve the climate crisis, we have to solve this crisis as well,” Richardson asserted.

The report estimates $2.5 trillion in clean-energy sector investments will be needed by 2030 in order to reach near-zero carbon emissions by 2050.

LINCOLN, Neb. – New research suggests the nation’s most trusted news sources are dropping the ball when it comes to helping voters in Nebraska and across the nation connect the dots between more frequent and extreme weather events and a warming planet.

Scientists repeatedly have warned that climate change is exacerbating drought, wildfires and flooding, and making storms such as Hurricane Ida stronger.

But Allison Fisher – climate and energy program director with the watchdog group Media Matters – said Americans are not getting the full story.

“The hesitancy to connect extreme weather events to climate change by these networks,” said Fisher, “is very closely related to campaigns by the fossil-fuel industry to make climate change a third rail, make it confusing, to cast that doubt.”

The latest report by the world’s top climate scientists confirms that less than a decade remains to dramatically cut greenhouse-gas emissions from fossil fuels to avoid potentially catastrophic impacts.

“And it hit the media hub in New York City,” said Fisher. “It kind of forced a deeper look at what was behind this record-breaking rainfall. And the answer is climate change.”

Fisher said it’s important for climate change to become a bigger part of the national conversation, along with what’s causing it: the burning of oil, gas and coal.