The rising costs of petrol are a major headache for most consumers, but a certain group of students may have just the solution.

For a reasonable Rs300,000, your gas guzzler can be converted into an electric car. This is thanks to the ingenuity of students from the Usman Institute of Technology.

The Institute’s Bachelor of Electrical (Major in Electronics) students have transformed an ordinary small 800cc car into an electric vehicle; a revolutionary development in Pakistan’s automotive sector.

The Suzuki Mehran car, a popular choice among the country’s motorists, has been chosen to test this system. The little hatchback has been successfully converted and developed with the financial support of Syed Asif Hassan, a Pakistani living in the United States.

Ghulam Mohammad Lohar, a member of the team that developed the electric car, told The Express Tribune that any small vehicle can be converted into an electric car.

What is unique about the system developed by the students is that the driver can still choose to run their combustion engine if he or she so desires, Lohar adds.

Ghulam Mohammad says that usually, electric cars do not drive on petrol and this limits their ability to travel long distances, such as between cities.

On the other hand, it is difficult for the common man to buy a new electric car from a mainstream manufacturer as the prices are astronomical.

“Considering the difficulties of people, we have developed a method to convert ordinary cars into electric ones and these can also be driven on petrol when needed,” Ghulam Mohammed explains.

Elaborating on the details of the electric car and its batteries, he says the most important part of this invention is the battery pack which is made from imported lithium iron phosphate cells.

“Taking into account the average distance and the number of passengers, a 7kW battery pack has been developed, the capacity of which can be reduced or increased as required.”

He claims that the minimum life of this battery is four to five years and it can complete its charging cycle four thousand times. “The cost of replacing the battery is about half the total cost of conversion,” the inventor continues.

Ghulam Mohammad explains that it takes four to five hours for the battery to be fully charged – and that too by using just seven units of electricity. 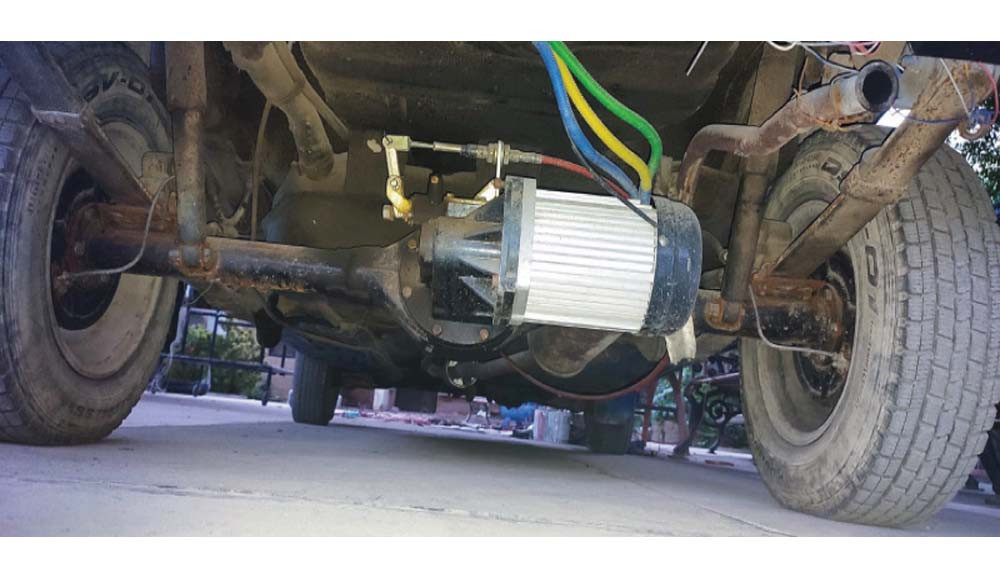 With an average tariff, the battery will charge Rs.100 and cover a distance of up to 80 km. He says that in a city like Karachi, commuting from home to office and returning is less than that.

The maximum speed of the car is 50 kilometres per hour, depending on the number of passengers and the weight of the vehicle.

Ordinary cars, which are widely used by local motorists, can also be converted to electric vehicles by using this technology.

“The motor installed in the car is waterproof. On the other hand, in case of continuous charging, an automatic system cuts in once the battery reaches full capacity,” Ghulam Mohammed says.

He adds that the electric system is equipped with special sensors that block the power supply from the battery at a temperature of 60 degrees Celsius to stop it from overheating and, therefore, averts any safety hazards.

A prototype of the car is available at the UIT and can be inspected or tested by any citizen. The project has been completed in a period of six months.

The team of UIT is confident that this project will play an important role in the development of electric cars in Pakistan and the existing cars will easily be converted.

The creators of the vehicle believe that there are possibilities to partner with car manufacturers or new investors to commercialise the project. Plans are afoot to add more advanced features to the electric car.