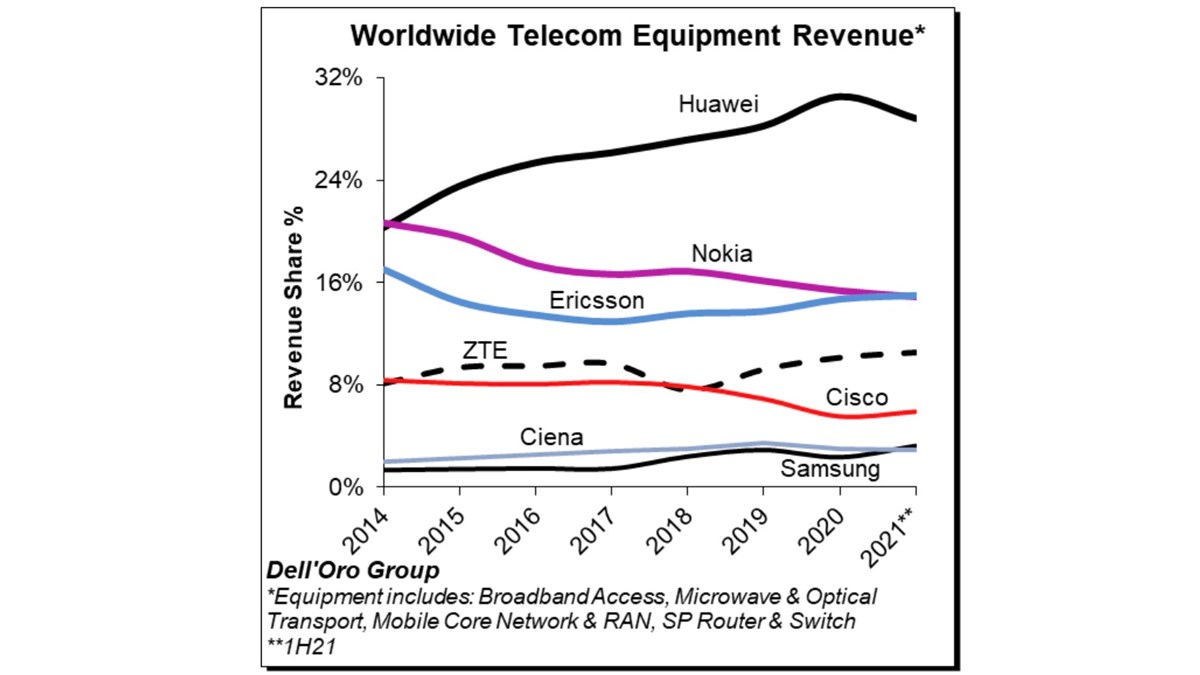 Investments in telecom networks worldwide increased for the fifth consecutive quarter during the three months to the end of June, according to research house the Dell’Oro Group. And despite the ongoing pressures of the Covid-19 pandemic and the global chip shortage that is impacting supply chains, the Dell’Oro team expects further growth during the second half of the year and for the market to grow by 5-10% for the full year, which could tip it past the $100 billion mark.

Dell’Oro has a very set way of looking at this market (which is helpful): Its telecom equipment market research covers equipment in the Broadband Access, Microwave & Optical Transport, Mobile Core & Radio Access Network (RAN), and Service Provider Router & Switch sector (but doesn’t include consumer devices such as smartphones).

But while the pace might have slowed from fever pitch, investments in China on 5G and fixed networks are still driving a significant chunk of the market and, as a result, Chinese vendor Huawei is still the overall market leader by some margin, despite its sales and marketing challenges in many other parts of the world.

But those international pressures are starting to tell: While the overall market grew in H1, Huawei’s market share slid below 30%, though that still almost double the share of its nearest rivals Ericsson and Nokia: The Finnish vendor was the other major equipment supplier to lose some market share during H1, according to Dell’Oro’s calculations – that will be due to the ongoing challenges it faced in the radio access network (RAN) sector during the first half of this year, though there were certainly signs of improvement during the second quarter. (See Nokia fixes its sights on further growth after strong Q2.)

Other major vendors — Cisco, Ericsson, Samsung and ZTE – managed a slight increase in market share during H1 and, overall, the vast majority of the telecom infrastructure market is dominated by just even companies, with the top seven vendors commanding 81% of the market (little wonder major network operators would like to see a broader selection of potential suppliers).

So what is the overall value of this market? Well it looks like it’ll be hitting of even breaking the $100 billion mark if Dell’Oro’s expectation of full year growth in the 5%-10% range is achieved: The market in 2020 was worth between $90 billion and 95 billion, according to the research firm, so a mid-point of that range growing at 7.5% would result in a market worth $99.4 billion, but growth at the high end of the range would tip it into three figures.

Two of the key drivers will be the RAN and Broadband Access markets, both of which have been growing at a strong pace this year so far: The RAN market is set to grow at between 10% and 15% this year, which means it could be worth as much as $40 billion, while the increasing number and size of investments in fibre broadband access networks around the world is driving growth in the Broadband Access market, which Dell’Oro reports was worth $3.6 billion during the second quarter alone.