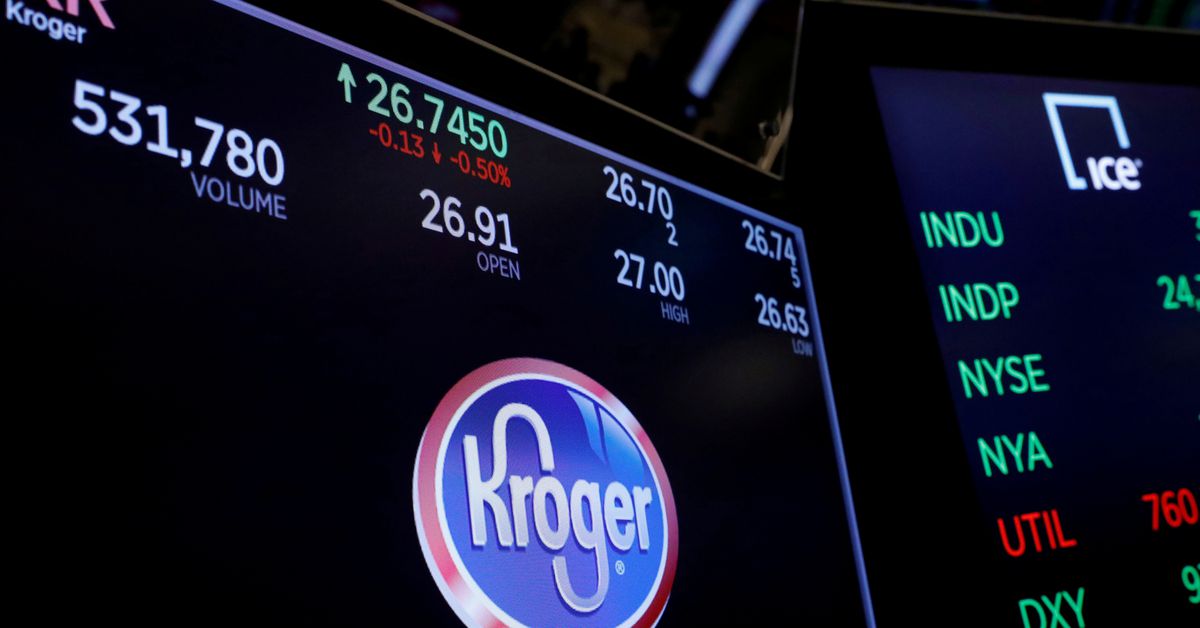 A logo of Kroger is displayed on a monitor above the floor of the New York Stock Exchange shortly after the opening bell in New York, U.S., December 5, 2017. REUTERS/Lucas Jackson/File Photo

Sept 10 (Reuters) – Kroger Co (KR.N) said on Friday it expected a smaller decline in annual same-store sales as nerves around this summer’s surge in coronavirus infections kept Americans stocking up on groceries.

The spread of the more infectious Delta variant in the United States has delayed a return to normal and forced people to consolidate their shopping trips, boosting businesses of big traditional grocers such as Kroger.

The operator of Ralphs, Dillons and Fred Meyer stores said it expected a 1% to 1.5% fall in full-year adjusted same-store sales, compared with a 2.5% to 4% decline forecast previously. Analysts expect a decline of 2.9%, according to Refinitiv data.

Kroger has also been strengthening its online business by partnering with Ocado Group Plc (OCDO.L) for the UK-based company’s advanced robot technology for warehouses and third-party delivery firms like Instacart Inc.

It has launched “Kroger Delivery Savings Pass,” a service that offers subscribers unlimited delivery for $79 annually, in Florida in a direct challenge to similar services from rivals Albertsons Cos Inc (ACI.N) and Walmart Inc (WMT.N).

The company said it expected annual adjusted profit between $3.25 and $3.35 per share, compared with its prior range of $2.95 to $3.10 a share. The forecast was higher than estimates.

Same-store sales, excluding fuel, fell 0.6% in the second quarter ended Aug. 14 from a year earlier, when people stockpiled groceries and cleaning products at the height of COVID-19 lockdowns. Analysts on average expected a 2.8% decline.

Kroger earned 80 cents per share on an adjusted basis, beating estimates of 64 cents.

The company’s shares declined 2.7% before the bell, having jumped around 45% so far this year.

Reporting by Praveen Paramasivam in Bengaluru; Editing by Aditya Soni