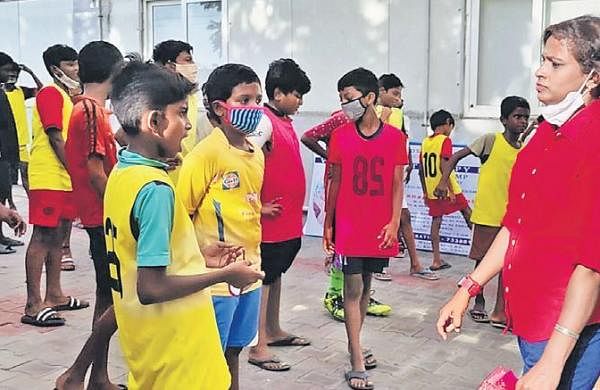 CHENNAI: To 34-year-old sports physiotherapist Kanaga Lakshmi, the stint in Tamil movie Bigil  is one of the many milestones she passed ever since she came to Chennai as a student. A native of Nilakottai in Dindigul, she has seen many peaks and troughs of life, growing wiser and stronger with each. As she stands head high, proud of having her own physiotherapy practice and the experience gained from working for both the Indian and Tamil Nadu women’s football leagues, she feels the need to give back to the community.

It is with this intention that she organised a free physical-fitness assessment camp in the city on Wednesday last week. The response was overwhelming, she feels, with over 100 young sportspersons from poor families turning up. “Young men and women residing in slums are outstanding in sports, but they often get dropped from teams because of the lack of attention to fitness and consequent injuries,” Kanaga Lakshmi said. At the camp, the young sportspersons received lessons on how to respond to injuries and stay fit.

With 11 years of experience in sports physiotherapy under her belt, Lakshmi believes that one of the defining moments of her life was when she was chosen to work on the sets of Vijay-starrer Bigil. She not only trained Nayanthara, who played a physiotherapist in the film but also took care of other actors during their football practice sessions. To top it all, she got to play a small role in the movie. Ever since the completion of the film, she has been planning to train young sportspersons from poor families.

On what compelled her to take the decision, she said: “Where I’m from, girls didn’t usually pursue higher education because they had to go to Madurai, other parts of Dindigul, or Chennai. My mother was a single parent. So, she was under a lot of pressure to get us settled. Now, to see young women take up sports, especially football, is heartening,” she said. “There were 15 women among the 110 who participated in the camp. That’s not much, but that’s a start,” she added.

The students received personal fitness assessments from her, followed by tips to prevent injuries from Sanjay, her friend and orthopedic specialist. A Korattur-based private hospital, RPS, allowed its premises to be used for the camp. Lakshmi runs her own physiotherapy practice in Nerkundram.

“Some of these sportspersons play rigorously during the matches. We, however, advise them to put all their energy into practice sessions but not drain themselves out during actual matches,” she said. “They also don’t pay much attention to their protein intake and the need to stay hydrated,” she added.

One of the participants, Subash (17), a resident of Ambattur who has played football for as long as he can remember, said: “We learnt a lot at the camp. For instance, when we play, not many use ice packs. If they are injured, they think resting for half an hour is enough. Today (Wednesday last), they told us how important it was to use ice packs,” he said. “We took a mental note of the things to do in case we suffer an injury and also how to avoid them as much as possible,” he added. Young men and women from places like Avadi, Ambattur, Korattur, and Pattabiram took part in camp on Wednesday.

For Kanaga Lakshmi, it’s just as refreshing as it is for them.