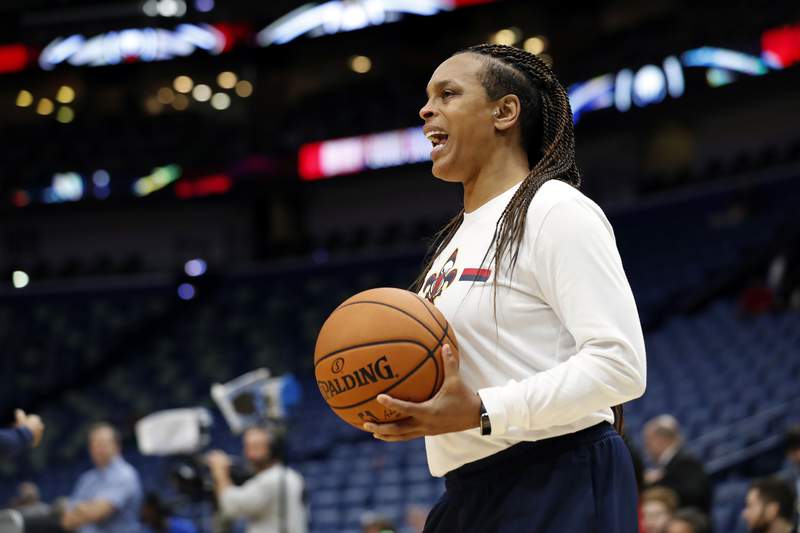 NEW YORK – Teresa Weatherspoon and Vickie Johnson stood next to each other for the photo of the inaugural 1997 New York Liberty team. Both played for storied Louisiana Tech and toiled overseas in dingy gyms before becoming the dynamic backcourt duo for the Liberty.

They captivated crowds at Madison Square Garden and led the defensive-minded New York team, one of the original eight WNBA franchises, to the finals in three of its first four seasons.

While New York didn’t win a championship, part of the Liberty’s legacy is their lasting impact on the sport.

Flash forward nearly 25 years and several Liberty players from that era are still working in basketball as the WNBA celebrates its silver anniversary season. Weatherspoon and Becky Hammon are assistant coaches for the NBA’s New Orleans Pelicans and San Antonio Spurs, respectively. Johnson is the head coach for the WNBA’s Dallas Wings.

“Those are my sisters for life,” said Weatherspoon, who was inducted into the Naismith Memorial Basketball Hall of Fame in 2019. “We put in some work.”

Kym Hampton and Sue Wicks are “Liberty Legends,” who have worked in the New York basketball community for years. Rebecca Lobo is a longtime ESPN basketball analyst and Crystal Robinson has been an assistant coach in college and the WNBA.

Sophia Witherspoon, who rounded out the starting five for the first Liberty team, coaches under-16 girls for USA Basketball and at her alma mater, Fort Pierce Central High School, in Florida.

Here are more things to know about some Liberty players and their accomplishments:

Johnson recalls her teammates had a “toughness like no other. Practice was harder than any game we ever played.

“We were proud to start something new in the states, having a professional league. We wanted to make sure it sticks around. So 25 years later, I’m blessed to still be a part of it.”

Now Johnson’s Dallas team is trying to reach the WNBA playoffs, which start Sept. 23. She keeps in touch with 83-year-old Richie Adubato, a longtime NBA assistant coach, who took over the Liberty in 1999.

Hampton squared off against Lisa Leslie for the first WNBA tipoff and scored the first Liberty points in 1997. Two years later, she tallied the inbound assist on one of the most iconic shots in WNBA history with the Liberty trailing in the final seconds against the Houston Comets in Game 2 of the WNBA Finals.

“Tina Thompson does some little head fake and she scores,” Hampton recalls. “Spoon’s like ‘Come on Kym, get the ball!’ I was going to roll it to Spoon, but Tina ran back to defend her. So I throw it, Spoon takes a couple of dribbles and lets it fly.”

Weatherspoon’s half-court bank shot beat the buzzer for the win.

Hampton retired at 36, and her daughter grew up cheering the Liberty from courtside. Now A’riel Jackson is a highly recruited player out of Bishop Loughlin High School in Brooklyn.

Wicks returned to her alma mater Rutgers to assist coach C. Vivian Stringer for two seasons. A 12-year-old Betnijah Laney would visit Rutgers’ practices with her mom, Yolanda, who played for Stringer when Cheyney State lost to Louisiana Tech in the 1982 NCAA title game. The younger Laney later joined Stringer’s program at Rutgers and now is a member of the current Liberty squad.

“The dynamic takes my breath away because it didn’t exist when I was a kid!” Wicks says. “It’s not like my mother or Kym’s mother played basketball and helped navigate that — usually it was a father-daughter type thing.”

She’s proud of the current players’ activism and openly promoting social justice causes. That included encouraging people to vote and canceling some games in the summer of 2020 to raise awareness of police brutality.

“The generation we have now playing are saying, ‘You know what, I’m going to say something out loud. You can’t fire us all and this is wrong.’ It feels like a revolution. It fills everyone with ‘Yes, I can be part of the change.'”

Weatherspoon coached at Louisiana Tech for six years after her WNBA career and joined the Liberty as director of player development. She was hired by the Pelicans in 2019, becoming the 11th female assistant coach in the NBA.

She works with guards and post players, including 6-foot-7 star Zion Williamson.

“She’s 5-8, but I think in Spoon’s mind she’s 6-6,” Wicks says. “She loves to get down in the paint, showing you how to be a post player. When Spoon threw you the ball, she could make you look like a genius.”

Now she wants to be among the first women to lead an NBA team.

“I know what I’m capable of,” Weatherspoon says. “I’m going to set the bar high, not just for me but for everyone else.”

Copyright 2021 The Associated Press. All rights reserved. This material may not be published, broadcast, rewritten or redistributed without permission.